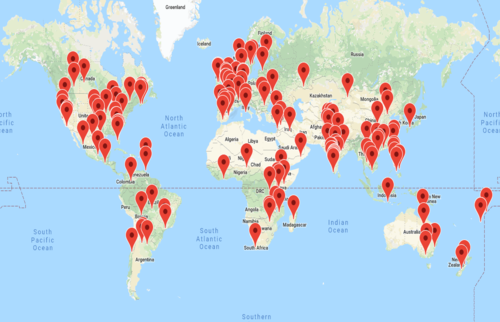 On Tuesday, we reported that the next several weeks leading up to the release of the IG Report towards the end of October were incredibly crucial to America with ‘deep state crimes‘ and wrongdoing potentially being exposed to the American people on a mass and official level, leading to concerns by some that ‘an event‘ might occur to take America’s collective mind off of the report’s release, refocusing it upon whatever ‘event‘ the ‘global elite‘ manufacture.

With Steve Quayle, Mike Adams, ANP and other independent news websites urging people to prepare ‘just in case‘ the luciferian’s are able to ‘create an event‘ to shift the narrative away from their own criminality, we get another reason why we should all be ‘preparing‘ in this new story by Michael Snyder over at End of the American Dream in which he reports that an unprecedented October blizzard that hit just prior to ‘harvest time‘ has devastated US farms across America’s heartland.

And while Democrats insanely scream of ‘global warming‘ destroying our planet, as we see in the crop loss map at the top of this story from youtube videographer ‘Ice Age Farmer‘, it’s actually ‘grand solar minimum‘ and the globalists weather modification programs that are putting our planet’s agriculture at risk. And between the mysterious food recalls we’ve reported upon previously on ANP and the food shortages that were already showing up in many US grocery stores this past summer, we should be paying very close attention to the words of one state lawmaker as read below.

As Susan Duclos had reported in this July 25th story titled “Exclusive Photos From Readers Across The Country: Food Shortages Are Here Now And The Media Is Downplaying The Dangers – ‘Signs Of The Times’ Part Two“, America had already been experiencing food shortages of certain products over the summer. And as the website Strange Sounds had reported all the way back in April of this year, US farmers were already struggling to get their seeds sown after the longest winter, with many running nearly two months behind schedule, and now we’re seeing this. The following excerpt comes to us from this Michael Snyder story.:

An unprecedented October blizzard that hit just before harvest time has absolutely devastated farms all across the U.S. heartland. As you will see below, one state lawmaker in North Dakota is saying that the crop losses will be “as devastating as we’ve ever seen”. I want you to consider the next quote very carefully. According to North Dakota state lawmaker Jon Nelson, we should expect “massive crop losses – as devastating as we’ve ever seen”…

If all this sounds “bad” to you, then you should go back and read the first part of this article again. This isn’t just bad. We are talking about complete and utter devastation that will have ripple effects for years to come.

Needless to say, food prices are going to go up. If you are wealthy and you don’t need to worry about food prices, then good for you.

But if you are like most of the country and your finances are already tight, this is going to hurt.

I very much encourage you to stock up and get prepared, because we are facing a major shift.

This was already going to be one of the worst years ever for Midwest farmers, and now this storm has put an exclamation mark on an absolutely horrific growing season.

Nobody is sure exactly what is coming next, but since we all have to eat, the truth is that every man, woman and child in America should be deeply concerned about what just happened.

So we’ll be taking a look below at the potential ‘two-pronged attack‘ upon our country’s food supply with many democrats pushing for socialism in America in the 2020 election, a system of government that nearly always brings famine and starvation to their people, and in the final section of this story we’ll be taking a look at some excellent prepping advice with all of this going on from a Natural News story and ‘Ice Age Farmer‘.

While so many on the left are of the mindset ‘the government will take care of us‘, with that same left now pushing for ‘socialism‘ in America and ‘socialism‘ almost always leading to ‘communism‘ and forced obedience to government, famine and mass starvation, all Americans need to do is take a look at what is still happening in Venezuela to get a good look at what might happen to America should ‘democratic socialism‘ arrive here. The mere phrase the leftists yell, ‘democratic socialism‘, is like trying to put makeup on a pig.


As PRI had reported back in January of 2017, in the once shining gem of socialism, Venezuela, the Venezuelan military had turned the food crisis there into a ‘racket‘, profiting off of people going hungry. With the food shortage becoming so dire that some people spend their days picking up grains of rice and corn that fall out of delivery trucks while others quite literally hunted down zoo animals and wildlife for their next meals, Venezuela is a perfect example of ‘socialism‘ in 2019 and a perfect reason to vote to make sure no Democratic presidential candidate pushing for socialism for America ever makes it into the White House.

And while the leftists push their insane politics in our faces, take a look at what’s happening in the streets of most leftist run cities which are descending into poverty and disease ridden wastelands. As Investor’s Business Daily had reported, decades of Democratic rule had ruined many of America’s ‘once‘ greatest cities. Why would anyone want America to follow the example being set by San Francisco? The Washington Post insanely reported that President Trump is trying to cast US cities as filth and crime ridden in an attempt to sway 2020 voters showing that once again, ‘truth is treason‘ in the ‘Democrats’ empire of lies‘.

As we had pointed out in this September 19th story on ANP titled “With Democrat-Run Cities Across America Transformed Into Diseased Wastelands, Imagine If Democrats Win The Presidency In 2020 And America Is Turned Into A ‘Sanctuary Nation!’ “, the facts reported within this story speak for themselves.