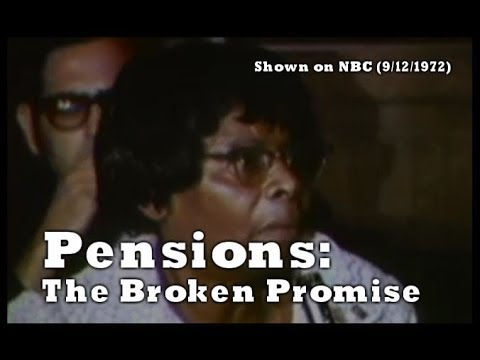 This Peabody award-winning 1972 NBC News documentary investigates abuses in the private pension system by telling the stories of several people who say their employers unfairly deprived them of their pensions. After the program aired, Accuracy in Media (AIM), a public interest group, filed a complaint with the Federal Communications Commission (FCC) alleging that NBC had violated the fairness doctrine by presenting just one side to the story. The FCC agreed and ordered NBC to provide coverage of the other side of the story, the first time it had ever made such an order. NBC took the case to the federal court of appeals where the ruling was eventually overturned, 2-1.

The Pension crisis underway is nothing new. It was brought to the light in 1964 and became a mainstream topic after this documentary in 1972. The underlying problems have not been fixed but only made worse. (Watch and Share)