The Mideast has its own variety of crazy humor. The Saudis have been blasting and bombing wretched Yemen, one of this world’s poorest nations, since 2015.

These US-supported attacks and a naval blockade of Yemen imposed by Saudi Arabia and its sidekick ally, the United Arab Emirates, have caused mass starvation. No one knows how many Yemenis have died or are currently starving. Estimates run from 250,000 to one million.

The black humor? The Saudis just claimed they were victims of Iranian `aggression’ this past week after the kingdom’s leading oil treatment facility at Abqaiq was hit by a flight of armed drones or cruise missiles. The usual American militarists, now led by State Secretary Mike Pompeo after the demented warmonger, John Bolton, was finally fired, are calling for military retaliation against Iran even though the attack was claimed by Yemen’s Shia Houthi movement. 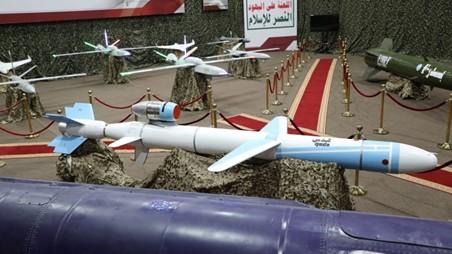 This drama came at roughly the same time that Israel’s prime minister, Benjamin Netanyahu, a close ally of US president Donald Trump, vowed to annex Palestine’s entire Jordan Valley if elected. Not a peep of protest came from the US, which recently blessed Netanyahu’s annexation of Syria’s Golan Heights while scourging Russia’s leader, Vladimir Putin, for annexing Crimea – a Russian possession for over 300 years.

I studied US photos of the damaged Saudi oil installations. Its oil tanks appear to be precisely hit at the same place. After the attack, the Saudis claimed half of their oil production was knocked out; but a day later, they vowed production would be resumed within a week. Parts of so-called drones were shown that appeared way beyond the technological capabilities of Yemen or even Iran. The missiles may have been supplied by Ukraine.

The Saudis, like their patron in Washington, have a poor record for truthfulness. Remember the Saudi denials about the murder of journalist and Saudi critic Jamal Khashoggi? More important, we have been waiting for more false flag attacks in the Gulf designed to justify a US attack on Iran.

The pattern of so-called drone attacks against the Saudi oil installations is just too neat and symmetrical. The Israelis have a strong interest in promoting a US-Saudi War. The attacks in Saudi came ironically right after the anniversary of 9/11 that plunged the US into war against large parts of the Muslim world.

As a long-time military observer, I find it very hard to believe that drones could be guided over such long distances and so accurately without aircraft or satellites to guide them. In Yemen, which is just creeping into the 12th century, changing a flat tire is a major technological achievement. To date, Iran’s missile arsenal has poor reliability and major guidance problems.

Adding to the questions, the Saudis have spent billions on US-made air defense systems. They failed to protect the oil installations. The Saudis would have been better off buying air defenses from the Russians, at a quarter of the US selling price.

Trump at least showed some wisdom by so far rejecting demands from the neocons that surround him to launch major attacks on Iran. Blasting Iran would not serve much purpose and would expose US forces in Iraq, Saudi Arabia, Egypt, Jordan, Somalia, and Syria to Iranian guerrilla attacks. Saudi oil installations – after what we saw last week – are vulnerable.

Attacking Iran, even if just from the air, risks a much wider Mideast war just as the Trump administration – which originally campaigned against ‘stupid’ Mideast wars – faces next year’s elections. But the administration is under intense pressure from its pro-Israel base to go after Iran.

Bombing Iran’s oil infrastructure would be relatively easy and has been intensively planned since early 2002. But what next? So-called ‘regime change’ (Washington’s favorite euphemism for overthrowing disobedient foreign governments) rarely works as planned and can get the US into horribly messy situations. The CIA overthrew Iran’s democratic government in 1953 and look where we are today.