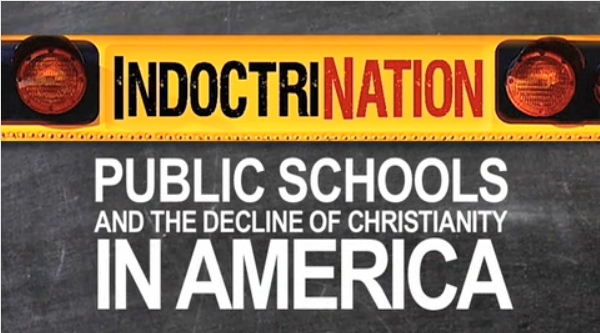 “Get control of the schools. Use them as transmission belts for socialism and current Communist propaganda. Soften the curriculum. Get control of teachers’ associations. Put the party line in textbooks.” – #17 from the 45 Communist Goals, read into the U.S. Congressional record in 1963

With tens of thousands of children skipping school recently as part of a “climate change” strike, despite the fact that the recent dire predictions over ‘climate change’ are no less dire than the 41 doomsday predictions over the course of the last 50 years, all of which never came to fruition, we see even more evidence of Communist indoctrination in our nations public schools. (Read all 41 failed predictions over at Breitbart)

Where did these children get the idea that all life would end within 12 years, or ten, or whatever number the latest politician or so-called “expert” decides to claim? From the media hyping global warming, and the liberal socialist/communist teachers that have infiltrated the entire public school system, where actual education has been sacrificed to activism, protests and indoctrination into a number of “progressive” causes, such as the LGBT agenda, the global warming hysteria, transgender activism, and whatever else is the radical liberal cause of the week or month.

Related: ‘So. Much. This’: Australian broadcaster shares a harsh reality check for #ClimateStrike students (OUCH!) 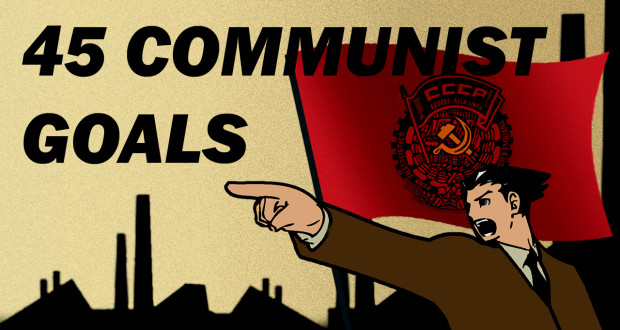 Before getting into some of the more disturbing recent examples of this type of indoctrination quite literally endangering the lives of our nation’s children, let us take a look at a few more of the 45 Goals of Communism, all of which have been fulfilled since 1963.

• 15. Capture one or both of the political parties in the United States.

• 16. Use technical decisions of the courts to weaken basic American institutions by claiming their activities violate civil rights.

• 18. Gain control of all student newspapers.

• 19. Use student riots to foment public protests against programs or organizations which are under Communist attack.

• 24. Eliminate all laws governing obscenity by calling them “censorship” and a violation of free speech and free press.

• 25. Break down cultural standards of morality by promoting pornography and obscenity in books, magazines, motion pictures, radio, and TV.

• 27. Infiltrate the churches and replace revealed religion with “social” religion. Discredit the Bible and emphasize the need for intellectual maturity which does not need a “religious crutch.”

• 28. Eliminate prayer or any phase of religious expression in the schools on the ground that it violates the principle of “separation of church and state.”

One only has to look at the Democrat party these days to see number 15 has been completed, with Senator Bernie Sanders trying to obtain the party nomination for president, and he is a self-identified socialist. Look to the House of Representatives, the new face of the Democrats, Alexandria Ocasio-Cortez, and avowed member of the Democrat Socialists of America. Look to the platforms of the the Democrat presidential hopefuls, gun control & confiscation of guns, the Green New Deal, total control of Americans eating habits, medicare for all, etc…..

In fact, all the warnings listed above can be seen in our present day society, and the push by media, public schools, and Hollywood, for more and more communist-like agendas.

Our first examples come from an unlikely source, the radically liberal NY Mag website, written by  a socially liberal, anti-religion, openly gay activist, Andrew Sullivan, titled “When the Ideologues Come for the Kids.”

In his essay, Sully highlights a number of troubling and frankly disturbing examples of educational indoctrination under the guise of “social justice.”

He spotlights a “progressive school” that banished separate restrooms for boys and girls,to which the students themselves started going back to the old system despite the new signage, where “Boys were using the former boys’ rooms, girls the former girls’ rooms.”

As an analogy for the price of progressivism, it’s close to perfect. Authorities impose an ideology onto reality; reality slowly fights back. The question is simply how much damage is done by this kind of utopianism before it crumbles under its own weight. Simple solutions — like a separate, individual gender-neutral bathroom for the tiny minority with gender dysphoria or anyone else — are out of bounds. They are, after all, reinforcing the idea that girls and boys are different. And we cannot allow biology, evolution, reproductive strategy, hormones, chromosomes, and the customs of every single human culture since the beginning of time to interfere with “social justice.”

After highlighting other examples, such as students being taught more about “racial” issues, making everything about the color of the skin, not the person, and how he recently defended the Drag Queen Story Hour, because “Getting children interested in reading with costumed clowns strikes me as harmless,” he then was directed to their website and found something other than just “costumed clowns,” getting children interested in reading, and instead found the following quote:

[DQSH] captures the imagination and play of the gender fluidity of childhood and gives kids glamorous, positive, and unabashedly queer role models. In spaces like this, kids are able to see people who defy rigid gender restrictions and imagine a world where people can present as they wish, where dress up is real.

Sully states “However well-meant, this is indoctrination into an ideology, not campy encouragement for reading and fun.”

The most important aspect of his essay comes from the numbers surrounding this new push by schools, the media, and Hollywood in regards to “trans kids,” where the contagion is skyrocketing and is in fact, quite literally, endangering them:

In the last few years in Western societies, as these notions have spread, the number of children identifying as trans has skyrocketed. In Sweden, the number of kids diagnosed with gender dysphoria, a phenomenon stable and rare for decades, has, from 2013 to 2016, increased almost tenfold. In New Zealand, the rate of girls identifying as boys has quadrupled in the same period of time; in Britain, where one NHS clinic is dedicated to trans kids, there were around a hundred girls being treated in 2011; by 2017, there were 1,400.[….]

In the case of merely confused or less informed kids, the consequences of treatment can be permanent. Many of these prepubescent trans-identifying children are put on puberty blockers, drugs that suppress a child’s normal hormonal development, and were originally designed for prostate cancer and premature puberty. The use of these drugs for gender dysphoria is off-label, unapproved by the FDA; there have been no long-term trials to gauge the safety or effectiveness of them for gender dysphoria, and the evidence we have of the side effects of these drugs in FDA-approved treatment is horrifying. Among adults, the FDA has received 24,000 reports of adverse reactions, over half of which it deemed serious. Parents are pressured into giving these drugs to their kids on the grounds that the alternative could be their child’s suicide. Imagine the toll of making a decision about your child like that?

Eighty-five percent of gender-dysphoric children grow out of the condition — and most turn out to be gay. Yes, some are genuinely trans and can and should benefit from treatment. And social transition is fine. But children cannot know for certain who they are sexually or emotionally until they have matured past puberty. Fixing their “gender identity” when they’re 7 or 8, or even earlier, administering puberty blockers to kids as young as 12, is a huge leap in the dark in a short period of time. It cannot be transphobic to believe that no child’s body should be irreparably altered until they are of an age and a certainty to make that decision themselves.

SUICIDE: BY THE NUMBERS

What is missing from the essay is the actual data on suicides, where “trans” kids are overwhelmingly more than twice as likely to attempt suicide.

14 percent of adolescents reported suicide attempts, but the breakdown makes it clear that parents, and educational systems that continuously attempt to confuse children about gender, are pushing those children to kill themselves.