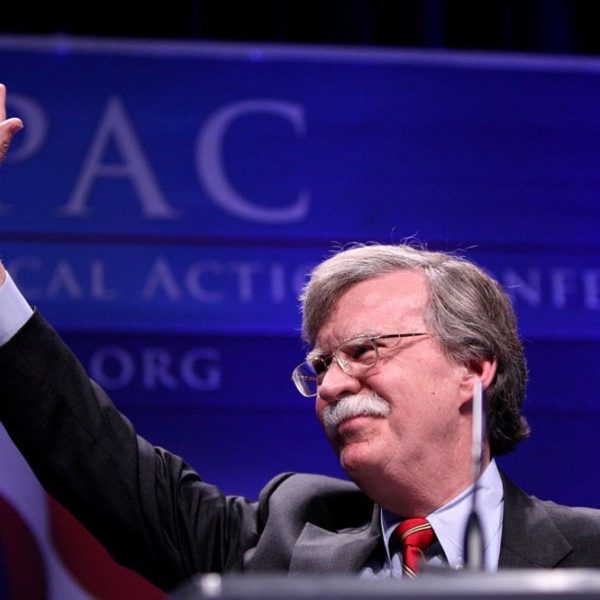 John Bolton was only national security adviser of the United States for less than18 months but it felt as if he had been there forever. And we are not – alas – done with him yet.

The first thing to be said about Bolton’s fall is that it was entirely consistent with his lifelong pattern. He went reluctantly and departed with all the grace of a cockroach. He showed no loyalty or even courtesy to the president who raised him from being an aged, deserved has-been to briefly being one of the most powerful men on the planet. He could never be graceful or grateful, never be a gentleman. He could never simply shut up.

John Bolton was never a genius: Though like all his neoconservative friends he imagined himself to be. It was always the childish fantasy of a creepy little psychopath who never grew up, always a lie.

For decades, the cockroaches and spiders in the most obscure recesses of all the conservative, libertarian and liberal-progressive think tanks sprinkled across Washington like smallpox scabs spoke with awe of Bolton’s brilliant brain, his remorseless work ethic and his capacious memory. They were only exposing their own even greater mediocrity.

For Bolton always lacked any form of judgment, wisdom, discernment or restraint. He had a simplistic rigid mind that never learned any anything good that was new and never forget everything that was old and vile.

As recently as July, he was lauded at a farcical so-called “national conservative” conference outside Washington as a champion of restraint and peace in foreign policy. Josef Goebbels could not have come up with a more outrageous and ludicrous lie. It was like congratulating Jeffrey Epstein on his chastity and respect for virgins.

Bolton was lauded by unending generations of neocon whores in the American media for his breadth of vision as if he actually understood the world. In fact the only thing he ever understood – and knew how to play – was the media and think tank gossip games inside the Washington Beltway.

John Bolton claimed to defend the national security of the United States: Another lie. As usual in the Infernal Groves of the National Capital, everything is the opposite of what it is presented as being. In fact, he worked endlessly to put his country at unprecedented risk.

To the very end, he sought to keep American soldiers dying in their thousands in an unending war in Afghanistan that he worked so hard with his neocon soulmates to unleash under their brainless puppet George W. Bush. Indeed, it seems to have been his efforts to (at least initially successfully) derail promising peace talks in Qatar between the Trump administration and the Taliban that finally led his longsuffering president to pull the plug on him.

John Bolton was never elected to and for anything. Even he seemed to realize that he inspired as much human trust as a cobra. But shameless, fawning flattery he could do and it won him diplomatic and policymaking entrees to one Republican administration after another.

Every one of his policies failed, cost untold hundreds of billions of dollars or took hundreds of thousands of lives. It never seemed to matter. He could count on the indulgent hosts and producers of Fox News to wheel him out endlessly, again and again to trot out the same tired old lies masquerading as wisdom and truth.

No one was ever allowed to call him out on it on national television to his face. He would never allow it. Like so many armchair warriors, he had been a draft dodger and was always a bully and a coward.

President Trump, to his genuine credit was a real sportsman and athlete. He played golf well. All his life he has revered sporting champions and war heroes. That may be sneered at childish, but it is vastly preferable to the fraudulent intellectual arrogance of the neocons none of whom have ever seen a shot fired in anger or even a gun pointed in their direction by a stranger with a scowl on his face.

Bolton liked to think of himself as a massive, manly Champion of Freedom: Instead he was always Igor, the hunchback dwarf who capers bizarrely beside Dr. Frankenstein or Dracula, the real men of power eager to bask in their reflected might.

But as Igor, he was always there: His spells of real power and influence spanned a massive three and a half decades. As early as the first Reagan administration from 1981 to 1985, he was already unleashing civil war, massacres and even genocide on the women and children of Central America. It was, really all that he was ever good at.

Bolton was also a central figure in the destruction of Iraq in 2003. He cheered on the attempt to destroy Syria in 2011. He solemnly and thoughtfully endorsed the destruction of genuine democratic and constitutional government in Ukraine in the Maidan coup of 2011. When it came to unleashing the Dogs of War, he was relentless and remorseless to the end.

Nor should we celebrate prematurely that we have seen the last of him yet: A future President Mike Pence or Nikki Haley is perfectly capable of making John Bolton secretary of defense, secretary of state or national security adviser for a second time.

And do not rule out him appearing magically reinvented as a figure of supposed wisdom and restraint at the side of a future President Elizabeth Warren or Kamala Harris. Compared to the fantastic, terrible and bizarre realities of Washington, Tolkien’s “Lord of the Rings” is a sober documentary.