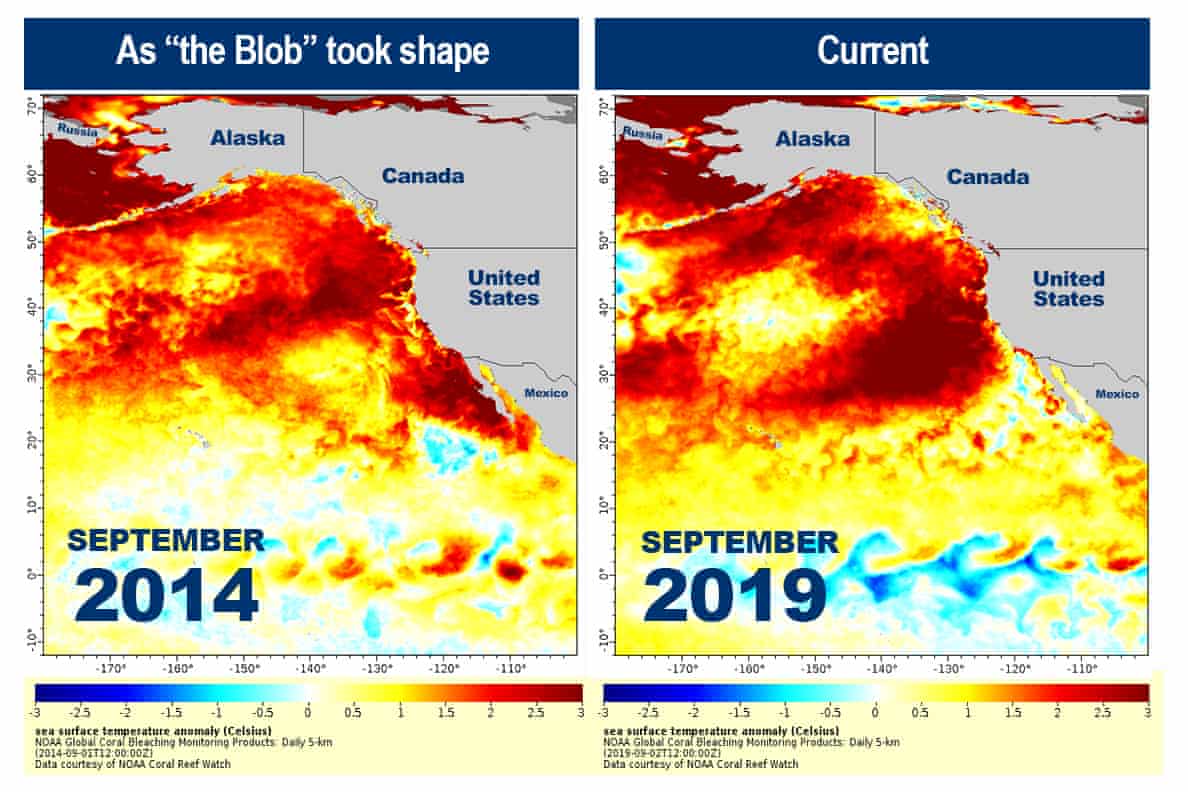 It is being called “the Pacific marine heatwave of 2019”, and officials are warning that it could have very frightening implications if it does not dissipate soon.  Right now, there is a vast expanse of water stretching from northern Alaska all the way to southern California where the water temperatures have rapidly risen to very dangerous levels.  In fact, in some spots the water temperature is already “as much as 6 degrees Fahrenheit above normal”, and there is a tremendous amount of concern about what will happen if the water continues to become even warmer.  At this point things are already so bad that we are being warned that this strange anomaly could “ravage marine life and decimate commercial fishing” all along the west coast.  The following comes from NPR…

A huge new marine heat wave has gripped the waters off the U.S. West Coast, threatening to ravage marine life and decimate commercial fishing over an expanse of the Pacific Ocean.

We are being told that this new anomaly is probably similar to another “marine heatwave” known as “the Blob” that made global headlines when it struck the region in 2014.

And if that is true, then things will definitely get very uncomfortable for marine life, but conditions will eventually go back to normal.  Although for the near future we are being warned that this anomaly is “on a trajectory to be as strong as the prior event”…

“It’s on a trajectory to be as strong as the prior event,” said Andrew Leising, a research scientist at the Southwest Fisheries Science Center. About five years ago, sea temperatures peaked at close to 7 degrees Fahrenheit above average. This year’s heat wave already is almost as large and almost as warm, with temperatures as much as 6 degrees Fahrenheit above normal over a very large area. The size and intensity of the heat wave are ominous signs of its potential danger to marine life.

But what if this new anomaly is not being caused by temporary weather patterns?

Normally, ocean temperatures take a substantial amount of time to change so dramatically, but in this case we have seen a radical change in temperatures “in just three months”…

“It went from a little bit warmer than average to about as warm as we’ve ever seen it, in just three months,” said Nate Mantua, a research scientist at Noaa’s Southwest Fisheries Science Center in Santa Cruz, California.

Could it be possible that this new anomaly is being caused by something else this time around?

We don’t know, and most of the experts are assuring us that we don’t have too much to worry about, but the size of this new blob has already reached 2.5 million square miles and it continues to expand at an aggressive pace.

The weeks ahead should tell us more.  The previous “Blob” dissipated very rapidly once weather patterns shifted, and hopefully that will happen to this new anomaly.

But if ocean temperatures remain elevated or go up even higher, that could potentially be absolutely devastating for marine life along the west coast, and experts are already warning about what could happen to the salmon population…

“Ocean conditions can be stressful for the salmon, if the temperatures get really warm and their food supplies are very poor,” Mantua said. “That’s a tough combination for them, because their metabolic rates go up with higher temperatures, so their need for food increases and the food supply is going down at same time.”

And it doesn’t take that much of a temperature change to put their lives in jeopardy.  The following information comes from the Seattle Times…

According to Dr. Andrew Leising, this new anomaly is already “one of the most significant events that we’ve seen”, and it just keeps getting worse.

So let’s keep a close eye on it.

To me, an image that the NOAA recently released certainly makes it look like what we are experiencing in September 2019 is significantly more severe than what we experienced in September 2014.  And if ocean temperatures continue to rise, it is inevitable that a lot of sea creatures will die.

But if this new anomaly is being caused by the exact same thing that caused “the Blob” to appear in 2014, then it could dissipate just as quickly and this will just be a relatively temporary phenomenon.