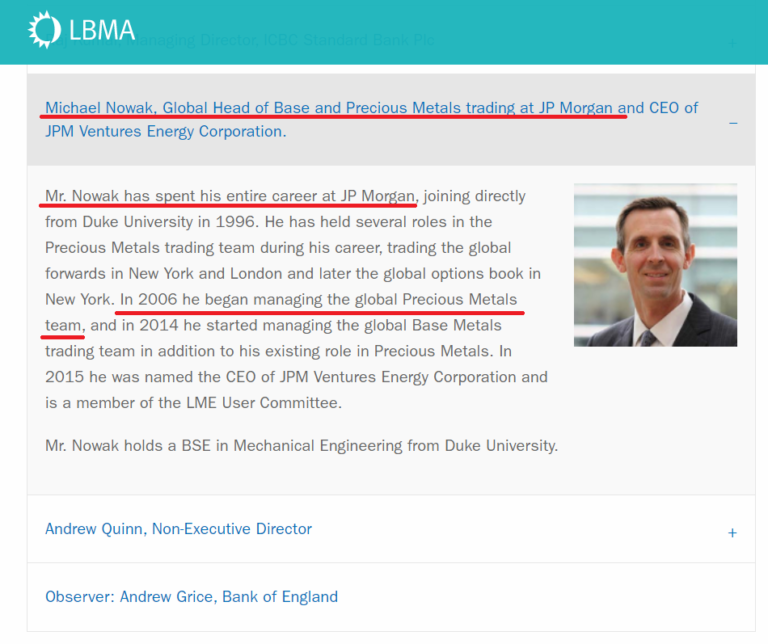 Michael Nowak, JP Morgan Chase managing director and head of the bank’s global precious metals desk, who is also a Board member of the London Bullion Market Association (LBMA), has just been indicted and charged by the US Department of Justice (DoJ) with manipulating the prices of precious metals-futures contracts over an 8 year period.

Racketeering Conspiracy and other Federal Crimes

“alleged participation in a racketeering conspiracy and other federal crimes in connection with the manipulation of the markets for precious metals futures contracts, which spanned over eight years and involved thousands of unlawful trading sequences.”

Commenting on the case, Department of Justice Assistant Attorney General Brian A. Benczkowski stated that:

“The defendants and others allegedly engaged in a massive, multiyear scheme to manipulate the market for precious metals futures contracts and defraud market participants.”

“These charges should leave no doubt that the Department is committed to prosecuting those who undermine the investing public’s trust in the integrity of our commodities markets.”

The Department of Justice brought the case against LBMA Board member Nowak as a result of an ongoing investigation by the Federal Bureau of Investigation’s (FBI) New York Field Office while the Commodity Futures Trading Commission’s (CFTC) Division of Enforcement provided assistance in the case.

“Smith, Nowak, Jordan, and their co-conspirators allegedly engaged in a complex scheme to trade precious metals in a way that negatively affected the natural balance of supply-and-demand.”

“Not only did their alleged behavior affect the markets for precious metals, but also correlated markets and the clients of the bank they represented. For as long as we continue to see this type of illegal activity in the marketplace, we’ll remain dedicated to investigating and bringing to justice those who perpetrate these crimes.”

The three precious metals traders have been charged in Chicago federal court in what the DoJ says was a scheme conducted by JP Morgan’s precious-metals desks in New York, London and Singapore. According to the DoJ’s press release, titled “Current and Former Precious Metals Traders Charged with Multi-Year Market Manipulation Racketeering Conspiracy”, the DoJ indictment alleges that between approximately May 2008 and August 2016, the defendants and their co-conspirators were:

“members of an enterprise  – namely, the precious metals desk of [JP Morgan] – and conducted the affairs of the desk through a pattern of racketeering activity, specifically, wire fraud affecting a financial institution and bank fraud.”

The DoJ went as far as charging each of Nowak, Jordan and Smith with one count of conspiracy under the Racketeer Influenced and Corrupt Organizations Act (RICO Act), and Act which was originally devised for taking down the mafia. The DoJ charges further state that the defendants, including Nowak:

“engaged in widespread spoofing, market manipulation and fraud while working on the precious metals desk” at JP Morgan “through the placement of orders they intended to cancel before execution (Deceptive Orders) in an effort to create liquidity and drive prices toward orders they wanted to execute on the opposite side of the market. In thousands of sequences, the defendants and their co-conspirators allegedly placed Deceptive Orders for gold, silver, platinum and palladium futures contracts traded on the New York Mercantile Exchange Inc. (NYMEX) and Commodity Exchange Inc. (COMEX), which are commodities exchanges operated by CME Group Inc.”

These deceptive orders, says the DoJ intended to:

“inject false and misleading information about the genuine supply and demand for precious metals futures contracts into the markets, and to deceive other participants in those markets into believing something untrue, namely that the visible order book accurately reflected market-based forces of supply and demand.”

The DoJ charges against Nowak following the DoJ – FBI and CFTC investigation now mean that a Board member of the London Bullion Market Association (LBMA), a board which sits at the very top of the LBMA’s governance structure, has now been charged by US federal prosecutors with participating in a multiyear racketeering conspiracy to manipulate precious metals markets and defraud customers.

For those not familiar with the LBMA, the LBMA  in the word’s of its CEO Ruth Crowell, “claims to be the world’s authority on precious metals” and “the standard setting organization that defines how precious metals are refined as well as traded around the world”.