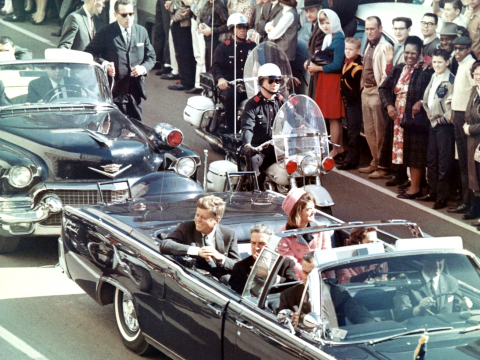 There’s not very much disagreement regarding what happened to JFK as much as the mainstream media (MSM) would have you believe.

It’s a simple concept, JFK bucks the presumed and official authority of Alan Dulles. He not only goes against Dulles foreign policy initiatives, as CIA Director, JFK actually had the intestinal fortitude to fire him and publicly disgrace him and expose the 1960’s version of the Deep State. This will prove to be a major coffin in JFK’s coffin.

Unfortunately, we are seeing President Trump proceed down the same path and we will link a past assassination with a potential assassination here on the CSS.

What Researchers Say About JFK Assassination and Dulles’ Role

There isn’t any serious disagreement among authors such as Jim Douglass’ JFK and the Unspeakable, of E. Howard Hunt’s deathbed confession, or David Talbot’s book The Devil’s Chessboard.

Jon Schwarz adds to the notion of the need to drain the swamp as he says The Devil’s Chessboard confirms that “your darkest suspicions about how the world operates are likely an underestimate. There is an unreachable Deep State group of unelected bankers, and intelligence and military officials who form an American ‘deep state,’ as they set absolute limits on political power and “deal” with elected representatives who deviate from the script!

In part, it becomes clear that the firing of Dulles by JFK was a major factor in JFK’s assassination. Talbot captures the essence of the Dulles brothers and is a very astute account on the assassination of John F. Kennedy.

JFK refused to play ball with the Deep State’s front man, CIA Director Dulles. JFK refused to fight the Soviet Union, Vietnam, Cuba, and would not even help repress various African independence movements. After the botched Bay of Pigs operation, Dulles had to go. And when Dulles went, that meant that JFK had to go in response.

I want to make it very clear that when JFK fired Dulles, the 1960’s Deep State version, headed by David Rockefeller, had to remove JFK because the firing of Dulles meant a catastrophic change in foreign policy that would have devastated the anticipated profits of all the wars that Dulles and CIA-globalist-serving-cabal.

The Trump Parallel with Dulles

John Bolton should write a book. I would even offer to title his book about his exploits in government. The book should titles “Confessions of a New World Order Serving War Monger”.

On the surface, the firing of Dulles was a great event for all young American boys who will not be called upon to die for their bankers. Even though the war monger is gone, I am not sure that Trump can reverse all the damage done by Bolton. Bolton has put Colombia and Venezuela on the verge of war. The Russians have moved in tanks. There is still the Syria problem, the Iran problem, the South China Sea problem and Bolton has angered our allies. That is a lot for Trump to undo and firing may not be the panacea for these events.