While Democrats in Congress begin a two-week previously scheduled recess along with Republicans, even Democratic presidential candidates find the timing of the recess horrific considering Nancy Pelosi had just launched an impeachment inquiry into President Trump due to his alleged actions in the Ukraine, leading to an increasing number of Democrats calling on House leadership to cancel the recess and come back to Washington DC to focus upon impeachment.

With some of those Democrat presidential candidates declaring we’re in a national emergency of sorts, claiming ‘domestic enemy‘ POTUS Trump allegedly ignored the rule of law in pursuit of his re-election as the reason Congress must come back and deal with impeachment now, House Minority Whip Steve Scalise (R-La.) weighed in by saying if Pelosi was serious about impeachment, she would not allow the House to recess.

“If Nancy Pelosi really did believe that the president of the United States should be impeached, which she’s alleging — would you leave town for two weeks in the middle of that kind of accusation?” he told reporters Thursday.

“Seriously, would you say, ‘OK, if you think the president United States should be impeached’ and then a few days after that you leave town for two weeks? Wouldn’t you be calling Congress back? Pushing this investigation forward so you can bring those claims to the floor, whatever those are which still haven’t been named? Not one single high crime and misdemeanor has been named. If you’re going to impeach a president, shouldn’t you at least name what that claim is,” he said.

Yet with Demonrat leadership now eyeing a quick impeachment (even though they are ‘bugging out‘ of Washington DC for two weeks), hoping to wrap up impeachment proceedings by the coming Christmas holiday, yet the chance of impeachment being successful slim to none with Republicans controlling the Senate, might something much more sinister be at play behind the scenes?

As this new story over at We Love Trump reports, according to Watergate journalist and Trump hater Carl Bernstein, US Attorney General Bob Barr is “about to expose a deep state conspiracy” that may not only totally vindicate President Trump, but expose the last several years of democrat/mainstream media lies as well to all of America, something that the globalists may very well be prepared to do absolutely anything to put a stop to.

With many Americans now understanding ‘false flag terror‘ thanks to Operation Northwoods, and how the ‘deep state‘ can manipulate the political narrative by either carrying out or ‘aiding and abedding‘ terrorist attacks across America, and the demonrats potentially in huge trouble because of their treasonous coup attempt against President Trump being nothing less than a full-scale Communist coup attempt to overthrow the results of the 2016 election, there may never be a better time than now for the ‘deep state‘ to carry out an ‘end all, end game‘ false flag attack upon the United States that fully cements their dreams of a totalitarian ‘new world order‘ into place. And they may be running out of time to do so. 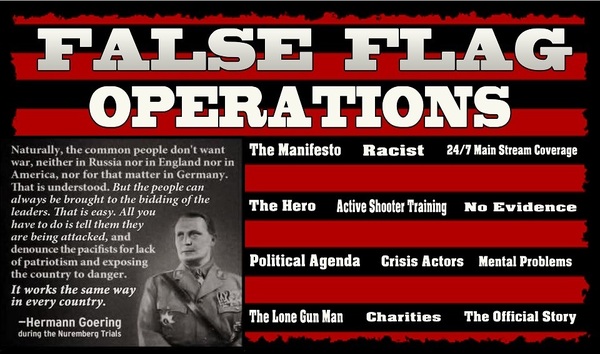 According to this new story over at Breitbart, Mexican authorities have issued an alert after a piece of radioactive equipment was stolen from a Mexican border city just south of the Texas cities of McAllen, Hidalgo, Pharr, and Mission. With their story warning that handling the equipment improperly could lead to the dangerous exposure of radiation, as one commenter on their story warned, “if they strap some C4 on it, it becomes a dirty bomb. Maybe not real big, but more then enough to shut down a city center or industrial center.”


According to Judge Andrew Napolitano, most of the terrorist plots against the United States over the past many, many years were created and then stopped by the FBI. As Stuart Wilde had reported in this 2013 story, the apparent purpose of these false flag operations was to deceive Americans into believing we’re under attack by foreign or domestic terrorists who are fictional. Based on the false belief that we’re being persistently attacked, Americans tend to accept and even our government’s invasions of foreign countries and our own growing police state. From that story.:

If you want to fly on an airplane, you must first be x-rayed or groped based, in part, on terror plots created by the FBI to prove the existence of terrorists who don’t actually exist.

Every government agent–right up to the President–who authorized or participated in such fraudulent terrorist attacks should be tried for treason and, if found guilty, hanged by the neck until dead.

Here’s an article from the New York Times: Terrorist Plots Hatched by the FBI

With even President Trump now venturing into ‘deep state treason‘ territory by allegedly remarking that they used to execute spies for treason, something that really should come back for America to ever return to ‘the rule of law‘ with globalists within Congress and the US government selling out America and the American people for globalism while attempting to vanquish the US Constitution, we’ve long reported on ANP that we strongly believe that if they know they’re about to be prosecuted for treasonous crimes, the ‘globalist enemies of America within‘ would carry out ‘end game‘ terror attacks upon America.

And with demonrats and Nancy Pelosi risking a very real chance of triggering another Civil War in America via their impeachment drive as heard from Mike Adams on Infowars in the 3rd and final video at the bottom of this story, even President Trump recently claimed ‘we are at war‘ in response to the CIA spy/whistleblower inside the White House that has launched this latest round of ‘get Trump‘ by the demonrat party that is pushing America closer and closer to a breaking point.