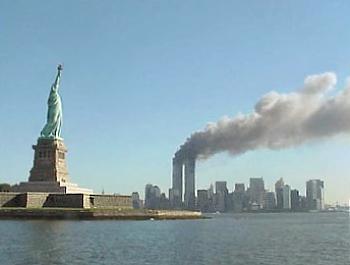 The 9/11 attacks not only killed thousands of Americans, they also led to America’s forever wars in Afghanistan, Iraq, Syria, Libya, Yemen, Iran, and elsewhere, which have brought about the deaths of thousands of other Americans and millions of foreigners. But the 9/11 attacks did more than that. They also fortified the U.S. government as a national-security state, which solidified the destruction of the freedom of the American people.

What is a national-security state? It is a type of governmental structure that has an enormous, permanent military-intelligence establishment. In the case of the United States, that means the Pentagon, the vast military-industrial complex, foreign military bases, the CIA, and the NSA. It also means power — enormous power, not only for the overall government, but also within the governmental structure itself. To place things in a general context, Egypt is a national-security state. So are China, Cuba, and Russia. And the United States.

It wasn’t always that way. America was founded as a limited-government republic, which is the opposite of a national-security state. No Pentagon, no vast military-industrial complex, no foreign military bases, no CIA, and NSA. Just a relatively small army.

That’s the way the Framers and our American ancestors wanted it. The last thing they wanted was the type of governmental structure under which we Americans live today. In fact, if the proponents of the Constitution had said to the American people after the Constitutional Convention that the Constitution was going to bring into existence a national-security state, they would have died laughing, thinking it was a big joke. Once they had realized that it wasn’t a joke, they would have summarily rejected the deal and continued operating under the Articles of Confederation, a third type of governmental system under which the federal government’s powers were so few and weak that the federal government hadn’t even been given the power to tax.

The revolutionary change occurred after World War II. Although the war against Nazi Germany had just ended in victory, U.S. officials told Americans that, unfortunately, they could not rest. That was because, they said, the U.S. now faced a foe that was arguable more dangerous than Nazi Germany. That foe was the Soviet Union, which, ironically, had served as America’s partner and ally during the war. U.S. officials maintained that America now faced a vast post-war communist conspiracy to take over the world, including the United States, one that was based in Moscow, Russia. (Yes, thatRussia!)

U.S. officials said that the only way to prevent this conspiracy from succeeding was to convert the U.S. government to the same type of governmental system that the Soviets had, which was a national-security state. Continuing as a limited-government republic, they said, would almost certainly result in defeat for America and a communist takeover of our nation.

That’s how we ended up with a national-security state type of governmental system, along with all of the dark-side powers that come with it. Assassination. Kidnappings. Torture. Regime-change operations. Sanctions. Embargoes. Invasions. Wars of aggression. Occupations. Coups. Secret surveillance. Indefinite detention. Secret prison camps. Military tribunals. Denial of due process of law. Out of control federal spending and debt, in large part owing to ever-increasing budgets for the national-security establishment. In other words, all of the things that one would have expected from the Soviet Union were now part and parcel of the “arsenal of freedom” wielded by the Pentagon, the CIA, and the NSA.

Never mind that none of this was authorized by the Constitution, the charter that called the federal government into existence. U.S. officials maintained that the Constitution was not a “suicide pact.” Continuing to follow it meant certain defeat at the hands of the Reds, they said. It was necessary to abandon constitutional niceties, they maintained, to save America.

Implicit in all the Cold War hoopla was that if the Cold War were ever to end, Americans could have their limited-government republic back. Of course, U.S. officials never thought for a moment that that would happen. The national-security state was a racket that was supposed to go on forever.

But then in 1989, the racket suddenly and unexpectedly came to an abrupt end. Financially broke and uninterested in continuing the Cold War, the Soviet Union declared an end to it, dismantled itself, and brought Soviet troops home from East Germany and Eastern Europe.

Interventionism and a new official enemy

That should have resulted in the restoration of America’s limited-government republic, but it didn’t. Having lost its official Cold War enemy, the U.S. national-security establishment found a new one by going into the Middle East and embarking on a killing spree, especially in Iraq, where it killed hundreds of thousands of people from 1991 through 2003. The victims including Iraqi children, hundreds of thousands of them. When US Ambassador to the UN under the Bill Clinton regime, Madeleine Albright, was asked by “Sixty Minutes” whether the deaths of half-a-million Iraqi children were “worth it,” she responded that while the issue was a hard one, the deaths were in fact “worth it.” By “it,” she meant regime change in Iraq.

Not surprisingly, the U.S. mass killing of Iraqis, along with its decision to station U.S. troops near the Muslim religion’s holiest lands, along with the unconditional military support of the Israeli government, led to terrorist retaliation, beginning with the 1993 attack on the World Trade Center, the attack on the USS Cole, the attacks on the U.S. embassies in East Africa, and then the 9/11 attacks.