Google-owned YouTube on Monday banned right-wing commentator James Allsup (450,000+ subscribers) and a bunch of other right-wingers for “hate speech” despite many having no strikes on their channels.

The move comes just days after the Anti-Defamation League released what some have called a “hit list” calling for 30 Christian and right-wing channels to be banned for “anti-Semitism.”

Allsup had hundreds of thousands of subscribers & has to be one of the biggest Right Wing YouTube accounts ever shut down.

Allsup said on Gab after YouTube banned his channel that he “had no channel strikes, no violations, nothing- simply an email telling me that my livelihood, my means to exercise my political voice, my business I’d built over almost three years, was taken away from me.” 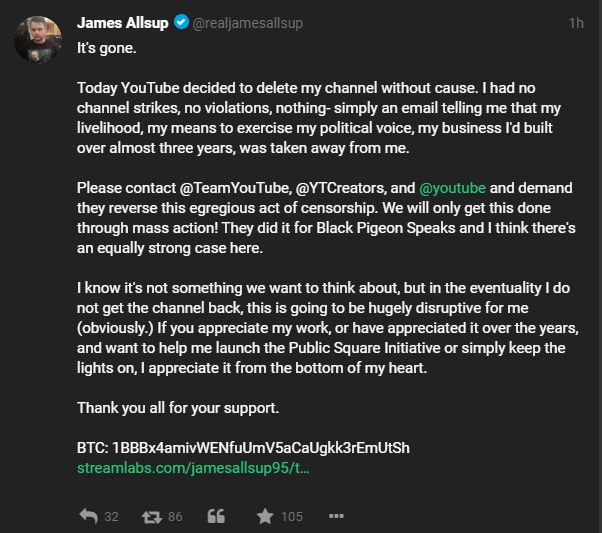 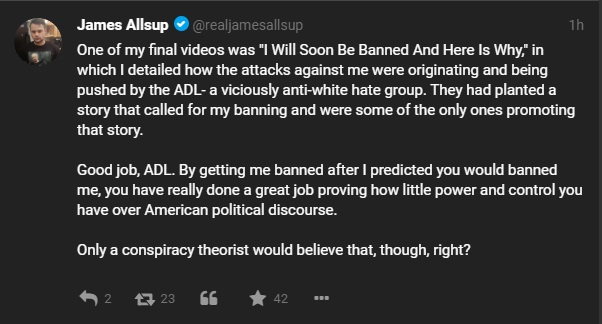 YouTube purged VDARE RADIO too, although it was still tiny. It’s almost like they don’t want reasoned dissent. https://t.co/57FYVLe6dx

As well as the American Identity Movement:

Be sure to follow us on more resilient platforms:

Not surprising, but the TRS youtube channel has just been totally deleted. So have a number of other channels. Youtube is basically dead as far as political content goes.