The “traditionalist” Neocons are going to have to decide to fish or cut bait.

I’ve been writing about the fracturing Deep State for the past five years:

The conflict has now reached the hot-war stage where bodies are turning up, explained away by the usual laughable covers: “suicide,” “accident” and “heart attack.” That Jeffrey Epstein’s death in a secure cell is being labeled “suicide” tells us quite a lot about the desperation of the faction trying to protect the self-serving predators that have wormed their way into control of many Deep State nodes of power.

Here’s the basic structure of the Deep State conflict as I see it. For context: The Deep State exploded in size and power during World War II. At the war’s end, the proper role of the U.S. in the postwar era was up for grabs, and over the course of a few years, the CIA and other intelligence agencies were established and the doctrine of containment of the Soviet Union became the dominant narrative, a narrative that held with remarkable consistency for four decades until the Soviet Union collapsed in 1991.

This collapse was another critical juncture, and debates over America’s role in this “unipolar era” were finally settled in favor of the militarily-geopolitically activist ideology of neoconservatism (Neocons).

This globalist ideology spawned a variety of monstrous policy disasters and as a result the Neocons have been challenged by factions within the Deep State.

This Neocon Globalist camp is dominated by the amoral ideology of the ends justifies the means. This everything is allowed, anything can be hidden or justifiedideology slowly spread from overseas black ops and a spectrum of interventions to the power nodes of the domestic Deep State.

The failures of Neocon globalism have ushered in another critical juncture in the Deep State. What is America’s proper role in a multi-polar world that is fracturing across multiple faultlines? This juncture is a manifestation of a broader profound political disunity in America and many other nations.

As the policy disasters launched by Neocon Globalists piled up, the Neocons were desperate for domestic political allies. As a result, the “traditionalist” Neocons accepted the systemic corruption of the Deep State by degenerate, predatory self-serving elites and their enablers in the intelligence agencies, corporate media and other nodes of power.

Arrayed against this completely corrupt, degenerate camp of Neocon Globalists is a “nationalist” camp within the Deep State that grasps the end-game of Neocon Globalism, and is busy assembling a competing nation-centric strategy. There is tremendous resistance to the abandonment of Neocon globalism, not just from those who see power slipping through their fingers but from all those firmly committed to a magical belief that past success guarantees future success, i.e. doing more of what’s failed will eventually succeed.

The “nationalist” faction within the Deep State is gaining ground, and now a fracture in the Neocon camp is threatening the Globalists: the “traditionalist” Neocons who accepted the systemic corruption of self-serving elites are being challenged by “rogue realists” who have finally awakened to the mortal danger posed by amoral predatory self-serving elites.

The debauchery of morals undermines the legitimacy of the state and thus of the entire power structure. As I recently noted in Following in Rome’s Footsteps: Moral Decay, Rising Inequality (June 29, 2019), America’s current path of moral decay is tracking Rome’s collapse step for step.

Having enabled and used amoral predators like Epstein, the “traditionalist” Neocons are forced to defend the debauched and now toxic “Liberal” defenders of the Neocon Globalist Project. That they will stop at nothing is already obvious, but what’s less obvious is their opponents, the “rogue realists” who understand that empires fall not from external enemies but from internal corruption and debauchery, are willing to take whatever steps are necessary to save the Republic from the self-serving elites that have infiltrated key nodes of Deep State power. 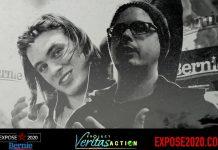