This background text was prepared in the context of the Kuala Lumpur MH17 Conference entitled MH17: The Quest for Justice, organized by JUST, the PGPF and the CRG.

The underlying objective is to examine the evidence, reveal the truth and uphold the rule of law.

Today, August 17th 2019, our thoughts are with the families of the victims of the Malaysian Airlines MH17 tragedy. The Conference is dedicated to the memory of the victims.

It is also a national tragedy for the people of Malaysia. The downing of MH17 with 283 passengers and 15 crew on board, took place barely a few months following the mysterious disappearance of Malaysian Airlines flight MH370 after departing on March 8, 2014 from Kuala Lumpur for Beijing, with 227 passengers and 12 crew members on board.

It is worth recalling that immediately after the MH17 plane crash on July 17 2014, prior to the conduct of a preliminary investigation, Secretary of State John Kerry and US Ambassador to the UN Samantha Power pointed their finger at Moscow without a shred of evidence. In turn,  the allegations directed against Russia were used to justify the imposition of sweeping economic sanctions  against the Russian Federation.

According to the official narrative, Malaysian Airlines MH 17 was downed by a BUK anti-aircraft missile by “pro-Russian separatists” with the support of Moscow.

The MH17 Inquiry has been conducted in an insidious fashion, largely responding to political interests.

Important pieces of evidence including eye witness reports, audio and video material  transmitted through Ukraine Intelligence (SBU) have either been manipulated or excluded from the Dutch inquiry, which largely endorses Washington’s accusations directed against Moscow.

“They never allowed us to be involved from the very beginning.  This is unfair and unusual. So we can see they are not really looking at the causes of the crash and who was responsible. But already they have decided it must be Russia. So we cannot accept that kind of attitude. We are interested in the rule of law, in justice for everyone irrespective of who is involved.

“They [the West] are accusing Russia but where is the evidence? 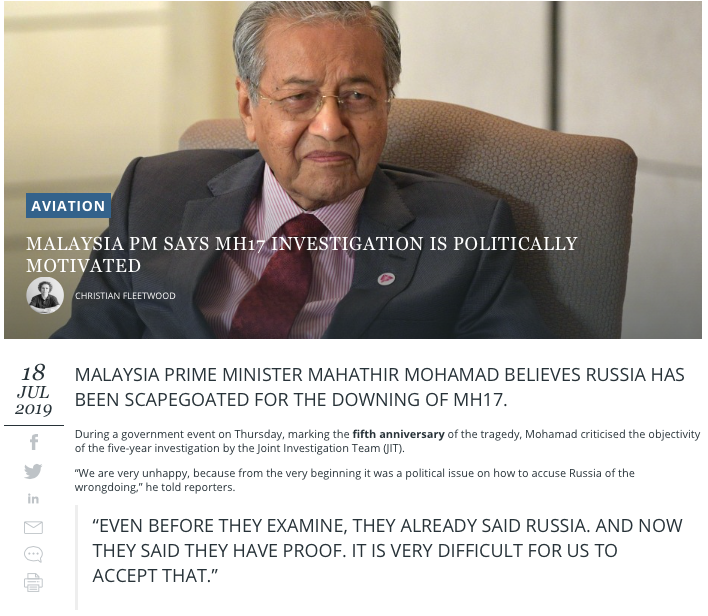 Moscow was accused without evidence of being behind the downing of MH17 from the very outset. Both Kiev and Washington concluded prior to the conduct of an investigation that:

“MH17 had likely been brought down by a ground-to-air missile fired from separatist-controlled territory in eastern Ukraine.”

There are three distinct reports:

The first official report on behalf of the Ukrainian government was released by Ukraine’s SBU secret service on August 7 2014, barely three weeks after the MH 17 tragedy (July 17, 2014).

The SBU report (which is discussed later in more detail) accuses pro-Russian rebels of having downed the plane with Moscow’s support.

And, a year later in September 2016,  The Dutch Joint investigation Team (JIT)  as part of a criminal investigation “confirmed” that the Malaysian airlines plane was “hit by a Russian-made BUK surface-to-air missile that was brought into Ukraine from Russia before the shootdown and subsequently taken back across the border.”

The assumption prior to the conduct of the DSB investigation was that a BUK missile had brought down MH17, and Russia was behind it.

Concrete evidence supporting other interpretations (including  on site testimonies and the presence of a second aircraft) was casually dismissed by the DSB:

President Barack Obama had called up Malaysia’s (former) Prime Minister Najib Razak. At a press conference (July 18, 2014),  “Najib told the press that he had spoken to the Dutch prime minister and the Ukrainian president; In subsequent developments, Prime Minister Najib Razak tacitly accepted the consensus imposed by Washington prior to the conduct of an investigation.

‘Obama and I agreed that the investigation will not be hidden and the international teams have to be given access to the crash scene.’

Prime Minister Datuk Seri Najib Razak said Malaysia will work with Ukraine to bring the perpetrators to justice. “We will do whatever we can to find the truth for the sake of families who lost their loved ones in this tragic incident. “We are waiting for the criminal investigation report, which is expected to be tabled by the year-end, followed by a meeting to decide on the next course of action,” said Najib. (New Straits Times, August 4, 2016)

Washington’s agenda in liaison with the Kiev regime was to blame Russia. This agenda was never questioned by the Najib government.

Much of the initial evidence and testimony including eyewitness reports (from various independent sources), recorded in July-August 2014 (in the immediate wake of the event) contradicts the official version. This body of evidence has been dismissed and in some cases destroyed.

In September 2015, in its final report, the Dutch Safety Board presented its findings regarding the Buk TELAR surface-to-air missile system which allegedly shot down MH-17 over eastern Ukraine on July 17, 2014.

On 24 May 2018 the Joint Investigation Team (JIT) published an update of its findings pointing (without firm evidence) to the role of the 53 Anti-Missile Brigade of the Russian Army. In May 2018, they launched an appeal for people in Donesk to come forward to corroborate their “findings” re. the deployment of the BUK missile system: 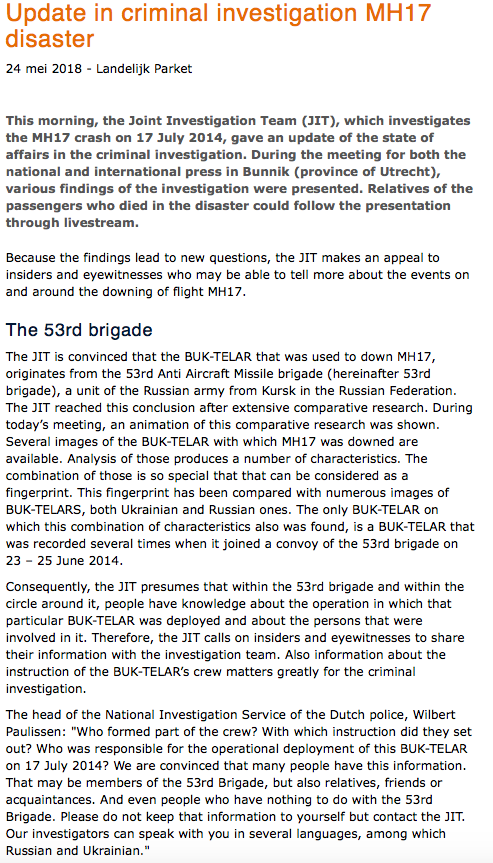 On the following day, the governments of Australia and the Netherlands officially declared that “they hold Russia responsible for the incident”. (see Polygraph Info, May 25, 2018)

Moscow remains the “main suspect” in this politically twisted investigation, which has now led to a legal procedure in the Netherlands directed against the alleged perpetrators.

Moreover, Britain’s Foreign Secretary Jeremy Hunt announced in mid-July 2019 that “the UK will provide financial support to the specialist criminal court in the Hague” which is slated to host the trial of the four suspects.