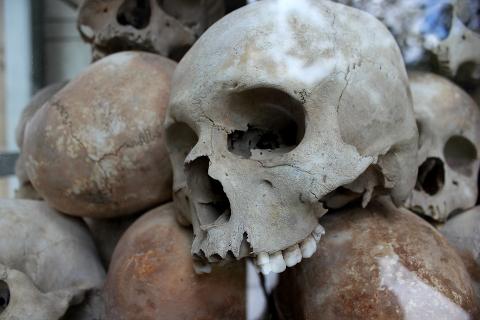 The often quoted University of Hawaii Democide Project makes is very clear that when the government goes after the guns of its citizens, genocide happens and is happened 16 times in the 20th century. But despite history speaking very clearly on this event, the Democrats running for President, in the 2020 Election Campaign, have made is abundantly clear where they stand on this issue. From the LA Times:

Almost every (Democratic) candidate in the field supports universal background checks, implementing “red flag” laws to take away guns from high-risk individuals, and bringing back a ban on the sale of “assault” weapons…

And what Americans must consider is that the above quote from the LA Times represents the position that the Democrats are taking to get elected. If elected, they will 100% move to take your guns. Even if they did not move to take your guns, there is historical precedent in their “electable platforms” that are cause for concern:

If Trump is not re-elected, what does this tell you? If you are still not sure, perhaps you should review the University of Hawaii report and everyone should consider other historical precedents in this area.

What Happens After Gun Confiscation?

Previously, we allowed the Obama administration to strip away our most of the provision for the last line of defense from an increasingly totalitarian government, by acquiescing to the United Nations and American advocates for gun control, perhaps we should examine the end game resulting from past gun control efforts:

1. In 1911, Turkey established gun control. From 1915-1917, 1.5 million Armenians, unable to defend themselves against their ethnic-cleansing government, were arrested and exterminated.

2. In 1929, the former Soviet Union established gun control as a means of controlling the “more difficult” of their citizens. From 1929 to the death of Stalin, 40 million Soviets met an untimely end at the hand of various governmental agencies as they were arrested and exterminated.

3. After the rise of the Nazi’s, Germany established their version of gun control in 1938 and from 1939 to 1945, 13 million Jews, gypsies, homosexuals, the mentally ill, and others, who were unable to defend themselves against the “Brown Shirts”, were arrested and exterminated. Interestingly, the Brown Shirts were eventually targeted for extermination themselves following their blind acts of allegiance to Hitler. Any American military and police would be wise to grasp the historical significance of the Brown Shirts’ fate.

4. After Communist China established gun control in 1935, an estimated 50 million political dissidents, unable to defend themselves against their fascist leaders, were arrested and exterminated.

5. Closer to home, Guatemala established gun control in 1964. From 1964 to 1981, 100,000 Mayans, unable to defend themselves against their ruthless dictatorship, were arrested and exterminated.

6. Uganda established gun control in 1970. From 1971 to 1979, 300,000 Christians, unable to defend themselves from their dictatorial government, were arrested and exterminated.

7. Cambodia established gun control in 1956. From 1975 to 1977, one million of the “educated” people, unable to defend themselves against their fascist government, were arrested and exterminated.

8. In 1994, Rwanda disarmed the Tutsi people and being unable to defend themselves from their totalitarian government, nearly one million were summarily executed. The total numbers of victims who lost their lives because of gun control is approximately 70 million people in the 20th century. The historical voices from 70 million corpses speak loudly and clearly to those Americans who are advocating for a de facto gun ban. Governments murderedfour times as many civilians as were killed in all the international and domestic wars combined. Governments murdered millions more people than were killed by common criminals and it all followed gun control.   Historically, American gun control legislation has been imitating Hitler’s Nazi Germany gun control legislation for quite some time. Consider the key provisions of the Nazi Weapons Act of 1938 and compare it with the United States Gun Control Act of 1968. The parallels of both the provisions and the legal language are eerily similar.

And then of course, Obama, before leaving office signed on to the UN Small Arms Treaty which outlawed ALL guns. How clear does it have to be?

If America allows the Democrats, by hook or by crook, to ever occupy the White House, Americans will surely see gun confiscation which, according to history, will result in Genocide.

Thomas Jefferson was very clear in his writings regarding the right to bear arms. Jefferson knew that the preservation of the Republic ultimately rested upon a well-armed citizenry. Jefferson felt it was absolutely necessary for American citizens to be able to protect themselves.