But these are the good times. Automakers are not amused.

The auto industry depends on subprime-rated customers that make up over 21% of total loan originations. Without these customers, the wheels would come off the industry. And tightening up lending standards to reduce risks would cause serious damage to the undercarriage. Subprime lending is very profitable – until the loans blow up – because interest rates can be high. But those subprime auto loans are blowing up at rates not seen since the worst days of the Financial Crisis – and these are the good times!

Serious auto-loan delinquencies – 90 days or more past due – in the second quarter, 2019, jumped 47 basis points year-over-year to 4.64% of all outstanding auto loans and leases, according to New York Fed data released today. This is about the same delinquency rate as in Q3 2009, just months after GM and Chrysler had filed for bankruptcy. The 47-basis-point jump in the delinquency rate was the largest year-over-year jump since Q1 2010: 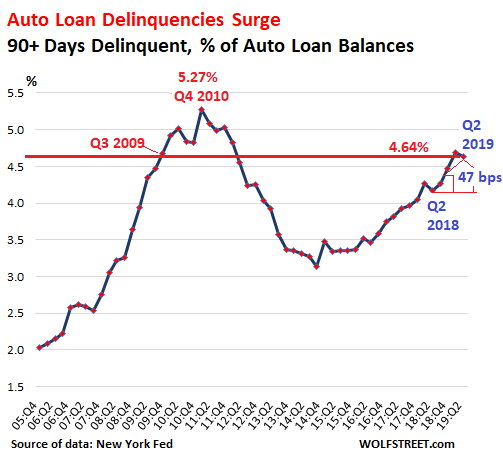 But this time there is no economic crisis. The unemployment rate and unemployment claims are hovering near multi-decade lows, and employers are griping about how hard it is to hire qualified workers without having to raise wages. So, unlike during the Financial Crisis, this surge in the delinquency rate has not been caused by millions of people having lost their jobs. It’s not the economy that did it. It’s the industry.

What the lenders are sitting on.

Total outstanding balances of auto loans and leases in Q2 jumped by 4.8%, or by $59 billion, from a year ago to $1.3 trillion, according to the New York Fed’s data (which is slightly higher and more inclusive than the amount reported by the Federal Reserve Board of Governors in its consumer credit data). Over the past decade, since Q2 2009, total auto loans and leases outstanding have surged by 76%: 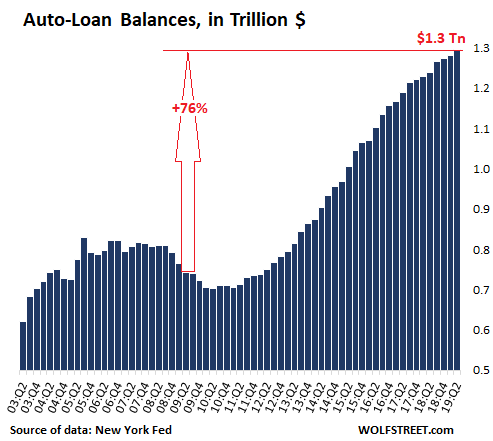 Of those $1.3 trillion in auto loans, 4.64%, or a record of $60.2 billion, are 90+ days delinquent, which gives the chart below quite an amazing trajectory. But this is not an employment crisis, when millions of people lose their jobs and cannot make the payments on their auto loans. What will this chart look like when the economy turns, and unemployment surges again, and people cannot make their car payments? No one has an appetite for making projections here.

Who ends up holding the bag?

Subprime auto loans will not cause the large banks to get in trouble. Large banks have been fairly conservative in writing subprime auto loans. Captive lenders, such as Ford Credit, are more aggressive because part of their job is to promote the company’s new vehicle sales.

The most aggressive have been specialized lenders, including small shops backed by private equity firms, and larger lenders such as Santander Consumer USA. But they’re spreading the risks to investors by packaging their loans into subprime auto-loan backed securities, of which the highest-rated tranches have AA or even AAA ratings.  And these securities are everywhere, from bond funds in the US to some pension fund in a Scandinavian city.

For investors and lenders, these delinquent loans don’t represent total losses. If the default cannot be cured and the lender decides to repossess the collateral – which is easy to do with modern tracking technologies – the lender obtains a used vehicle for which there is a liquid auction market (unlike housing) with wholesale auctions around the country, and finding a buyer is generally not the problem.

The problem is the difference between the price at auction and the outstanding loan amount. The difference plus expenses is the loss that the lender and investors take. This loss might be 50% of loan value.

Automakers are not amused.

As these soured loans have been piling up over the past two years, lenders became more circumspect and tightened up lending standards. At the peak of the subprime auto-loan craziness in Q2 2015, 25.4% of all loan originations were subprime. For GM, Ford, Fiat-Chrysler, and some import brands, 2015 was also the peak year in auto sales, driven by aggressive subprime lending. 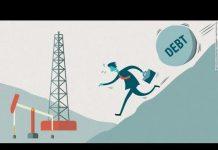 There Will Be More Blood In The Oil Industry? McDermott International May File Bankruptcy This Week