Silver prices have lagged gold prices since 2017 which has pushed the gold-to-silver ratio close to the all-time high. Silver prices are also significantly below what is predicted by our pricing model. We think that the reasons for this subdued performance are transitory and that silver will outperform gold again as the next precious metals cycle continues to rapidly unfold.

In spring 2017, we introduced a framework for understanding the formation of silver prices (Silver price framework: Both money and a commodity, March 9, 2017). In this report we are going to use this framework to analyze the recent performance of silver and give an outlook for where we think silver is heading over the coming months. In our framework piece, we concluded that silver is both money (store of value) and an input commodity and thus the impact of both industrial and monetary demand needs to be taken into consideration:

In our framework note, we also discussed the two main reasons why we think that silver tends to outperform gold in bull markets and underperform in bear markets: 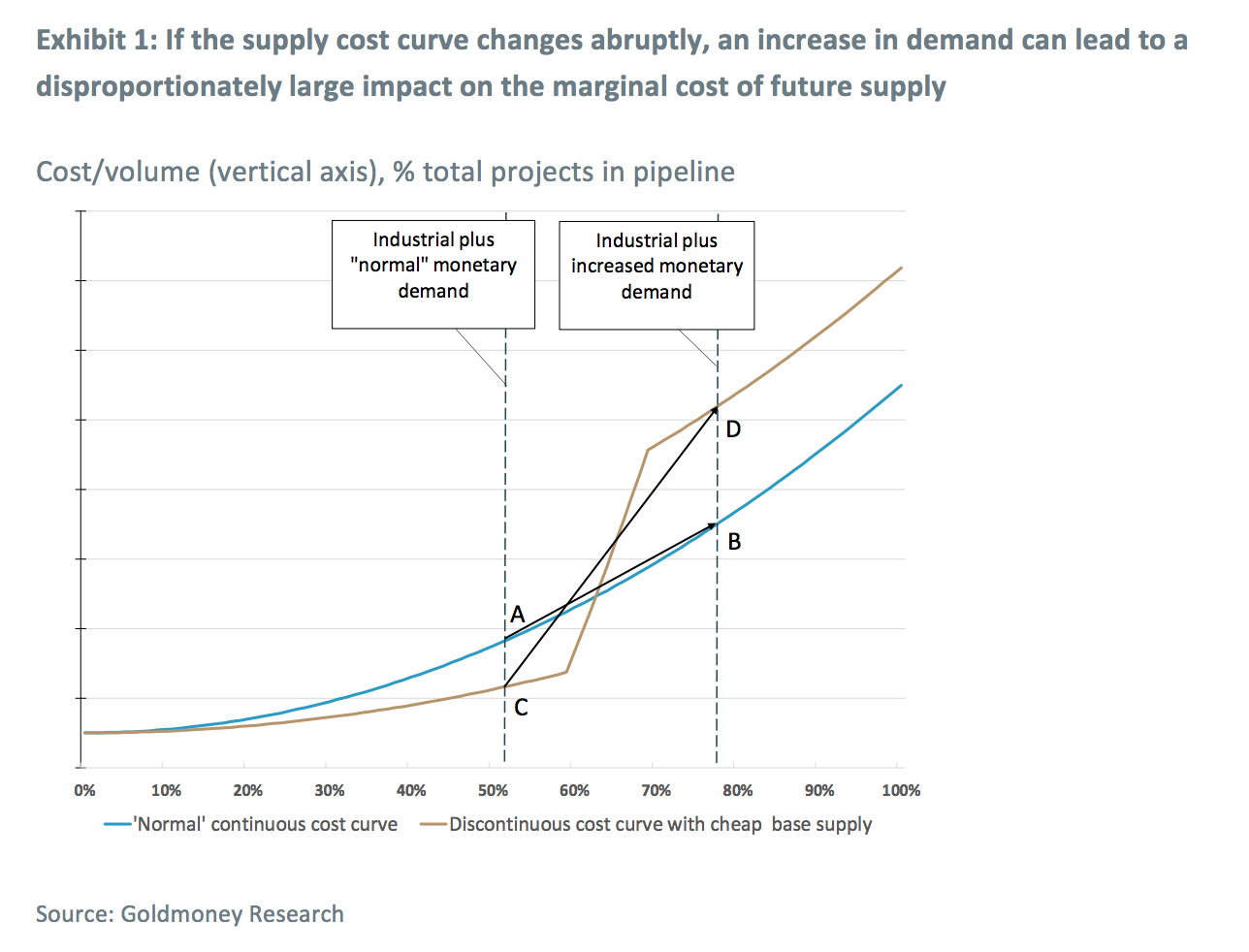 Silver prices have peaked in early 2011 at close to US$50.00/ozt and subsequently gradually declined to a low of US$13.70/ozt in late 2015, around the same time when gold prices hit their low. This silver price decline was in line with the findings of our model: Monetary demand for silver slowed down significantly as USD real interest rate expectations (10-year TIPS yields) rose from close to -1% to almost +1% (see Exhibit 2) which tends to be strongly negatively correlated with precious metals prices, silver more so than gold. As we have highlighted before, the decline in gold prices over that time-period was exacerbated due to a repricing in longer-dated energy prices, which has most likely negatively impacted silver prices as well. However, unlike gold – which since then has been on an upward trend and is up 40% from the lows – silver prices have been largely stagnating (see Exhibit 3). 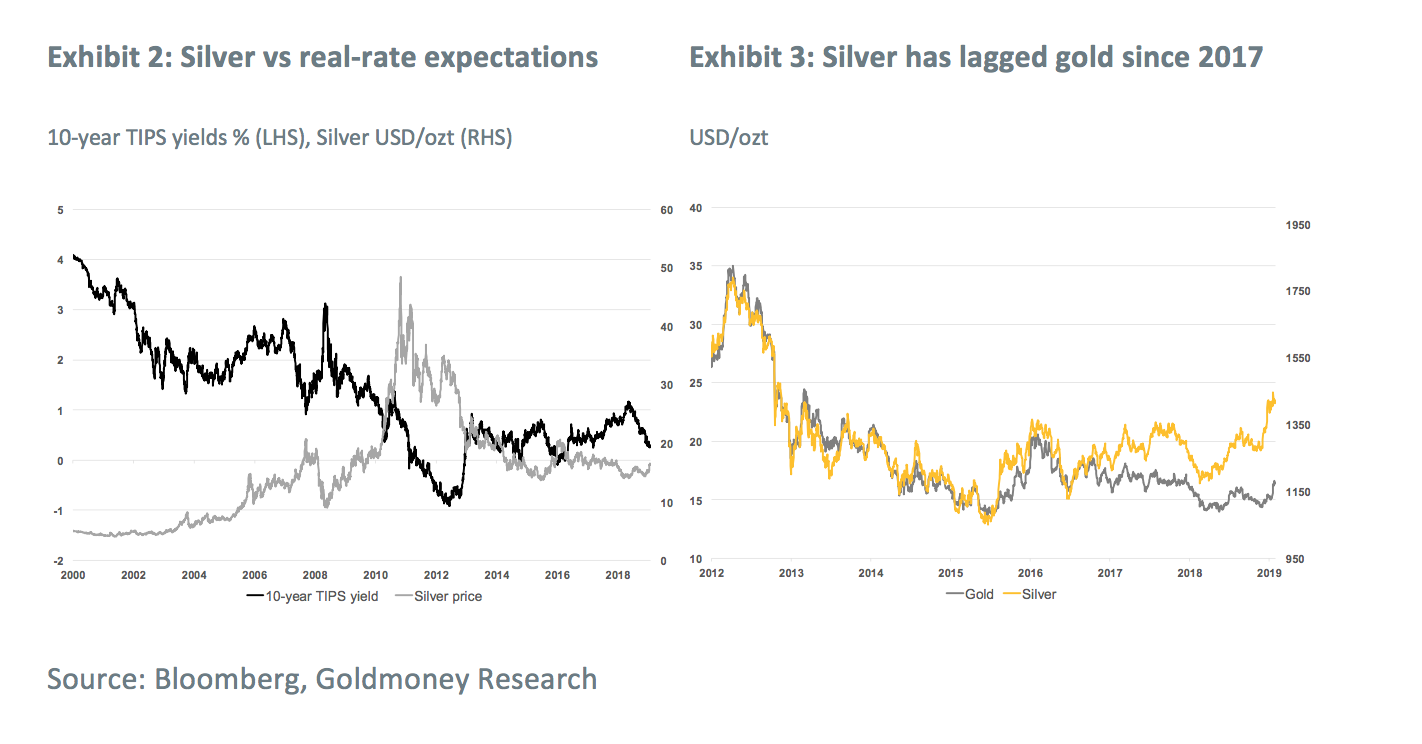 Moreover, silver prices have not just detached from gold, they have detached from the predicted levels in our pricing model as well (see Exhibit 4). Our model predicts that prices should currently be roughly at US$25/ozt – US$8/ozt higher than they are. Importantly, when silver prices bottomed in late 2015, prices were exactly in line with the predicted levels from our model. Subsequently, our model would have predicted prices to rise on the back of slowly declining real-interest rate expectations and a modest growth in industrial output. The decline in real-interest rate expectations did lead to rising gold prices, but silver prices did not follow. 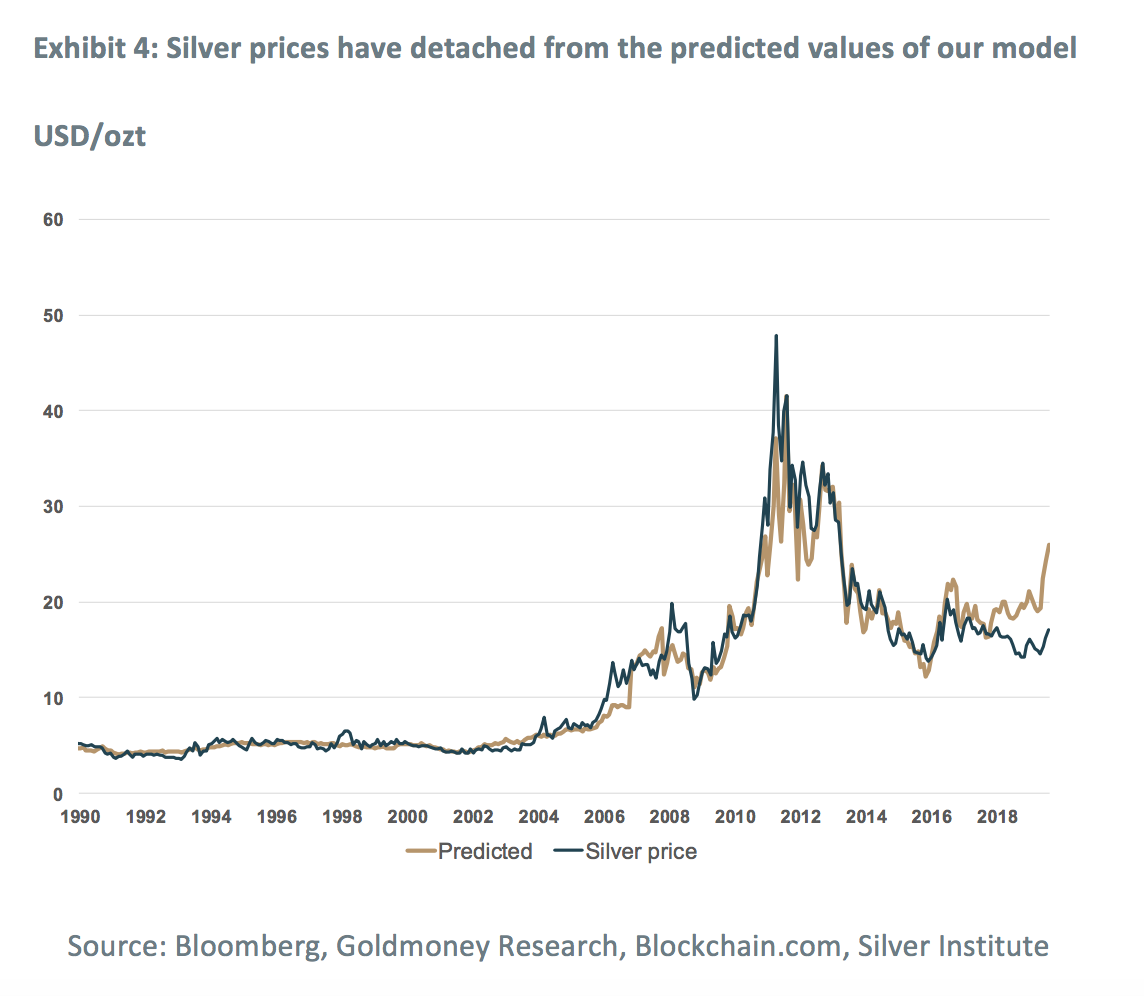 Why is silver lagging?

We believe that the answer is probably two-fold:

First, as we have highlighted before, silver prices are driven both by monetary and industrial demand. This is in contrast to gold prices, which are driven only by monetary demand as industrial demand is small in comparison and fairly stable. In our pricing model, we use industrial production data as a proxy for industrial silver demand. Historically, this has worked fine as the strong fit of our model shows (see Exhibit 4). However, the relationship between overall industrial production and industrial silver demand has dramatically changed over the past years. Historically, the photography sector has accounted for the lion’s share of industrial silver demand. This source demand has almost entirely disappeared by now.  In 2018, the photography sector absorbed just under 40 million ounces, down from around 200 million ounces (1/3 of global mine supply) twenty years ago (see Exhibit 5). Strong growth from other sectors (electronics, alloys, ethylene oxide) has been somewhat compensating for the declining demand from the photography industry, but this demand has also peaked around 2013 and is since then slightly down (see Exhibit 5).  Fortunately, for the silver industry, one manufacturing sector is increasingly creating demand for silver: the photovoltaic industry. Solar panel manufacturing consumed over 80 million ounces in 2018 (10% of mine supply) and is growing. However, demand from the photovoltaic industry is fairly new, and while rapidly accelerating, it hasn’t been large enough over the past five years to fully compensate for the loss in photography demand and the slowdown in the industrial demand. Hence, on net, industrial demand has been slightly trending down since 2013 (see Exhibit 5). We think lackluster industrial demand over the past years has been a contributor to the weak silver price performance and explains partially why silver has lagged gold.