The alleged use of sexual blackmail by spy agencies is hardly unique to the case of Jeffrey Epstein. Although the agencies involved as well as their alleged motivations and methods differ with each case, the crime of child trafficking with ties to intelligence agencies or those protected by them has been around for decades.

Some cases include the 1950s -1970s Kincora scandal and the 1981 Peter Hayman affair, both in the U.K.; and the Finders’ cult and the Franklin scandal in the U.S. in the late 1980s. Just as these cases did not end in convictions, the pedophile and accused child-trafficker Jeffrey Epstein remained at arms’ length for years.

“For almost two decades, for some nebulous reason, whether to do with ties to foreign intelligence, his billions of dollars, or his social connections, Epstein, whose alleged sexual sickness and horrific assaults on women without means or ability to protect themselves… remained untouchable,” journalist Vicky Ward wrote in The Daily Beast in July.

The protection of sex traffickers by intelligence agencies is especially interesting in the wake of  Epstein’sdeath. Like others, Epstein had long been purported to have links with spy agencies. Such allegations documented by Whitney Webb in her multi-part series were recently published in Mintpress News.

Webb states that Epstein was the current face of an extensive system of abuse with ties to both organized crime and intelligence interests. She told CNLive! that: “According to Nigel Rosser, a British journalist who wrote in the Evening Standard in 2001, Epstein apparently for much of the 1990s claimed that he used to work for the CIA.”

Vicky Ward, who wrote on Epstein for Vanity Fair before his first arrest, and claimed the magazine killed one of her pieces after Epstein intervened with editor Graydon Carter, said in a Tweet that one of Epstein’s clients was Adnan Khashoggi, an arms dealer who was pivotal in the Iran Contra scandal and was on the Mossad (the Israeli intelligence agency) payroll. This was also noted in a book “By Way of Deception” by former Mossad agent Victor Ostrovsky.

A former Epstein friend reported in @Salon last week that Epstein claimed “he worked for governments to recover money looted by African dictators. Other times those dictators hired him to help them hide their stolen money.” https://t.co/pYkOlFGoyY

The Times of Israel reported that Epstein was an “active business partner with former prime minister Ehud Barak” until 2015, adding: “Barak formed a limited partnership company in Israel in 2015, called Sum (E.B.) to invest in a high-tech startup…. A large part of the money used by Sum to buy the start-up stock was supplied by Epstein.”

Webb wrote he “was a long-time friend of Barak, who has long-standing and deep ties to Israel’s intelligence community.” On the board of their company sat Pinchas Bukhris, a former commander of the IDF cyber unit 8200.

Epstein’s allegedly protected status was revealed by Alexander Acosta, the former U.S. attorney in Miami who gave Epstein an infamously lenient plea deal in 2007. Acosta, who was forced to resign as President Donald Trump’s labor secretary because of that deal,  reportedly said of the case: “I was told Epstein ‘belonged to intelligence’ and to leave it alone.”

Several cases in the unsavory history linking intelligence agencies and sex scandals put the allegations against Epstein in context. Among these was the U.K. Kincora Boy’s Home, where at least 29 boys were reported to have been targeted at the Belfast, Northern Ireland, facility from the mid-1950s until the late 1970s, until it was shut in 1980. It also involved the alleged protection of child sexual abusers at the home and among their clients.

The Irish Times wrote that “destitute boys were systematically sodomised by members of Kincora staff and were supplied for abuse to prominent figures in unionist politics. The abusers – among them MPs, councillors, leading Orangemen and other influential individuals – became potentially important intelligence assets.”

The Belfast Telegraph also quoted former Labour Party MP Ken Livingstone, who said: “MI5 weren’t just aware of child abuse at Kincora Boys’ Home – they were monitoring it. They were getting pictures of a judge in one case, politicians, a lot of the establishment of Northern Ireland going in and abusing these boys.”

Three staff were eventually convicted of sexually abusing minors, which included the housemaster William McGrath, a loyalist “Orangeman” and allegedly an MI5 agent, according to theBelfast Telegraph in July 2014.

Although the U.K.’s Historical Institutional Abuse inquiry ultimately found  “no credible evidence” to support the allegations, two former U.K. intelligence officers maintained their claim of MI5’s involvement: Brian Gemmell says he alerted MI5 to the abuse at Kincora and was told to stop his investigation; and a former army intelligence officer, Colin Wallace, “consistently claimed that MI5, RUC special branch and military intelligence knew about the abuse at Kincora and used it to blackmail the pedophile ring to spy on hardline loyalists,” according to The Guardian.

The Irish outlet, An Phoblacht, wrote: “The systematic abuse of young boys in the Home and the part played by the British intelligence organisations to keep the scandal under wraps ensured that one side of the murky world of Unionist paramilitarism and its links to the crown forces was kept out of the public domain for years.”

In the U.S., the New York State Select Committee On Crime in 1982  investigated nationwide networks of trafficking underage sex workers and producing child pornography. Dale Smith, a committee investigator, noted that call services using minors also profited from “sidelines,” besides the income from peddling prostitution.  Smith said they sold information “on the sexual proclivities of the clients to agents of foreign intelligence.” Presumably, this information could be used to blackmail those in positions of power. Smith added that one call service sold information to “British and Israeli intelligence.”

Another U.K. scandal included allegations that Sir Peter Hayman,  a British diplomat and deputy director of MI6, was a member of the Pedophile Information Exchange (PIE). 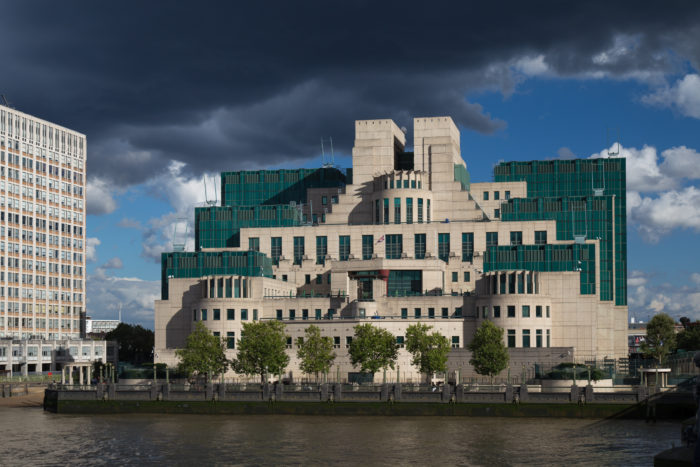 Police discovered that two of the roughly dozen pedophiles in his circle had been writing to each other about their interest in “the extreme sexual torture and murder of children,” according to the The Daily Mail.

In 2015, The Guardian reported that former Prime Minister Margaret Thatcher had been “adamant that officials should not publicly name” Hayman, “even after she had been fully briefed on his activities….formerly secret papers released to the National Archives shows.”

Still, Hayman was unmasked as a subscriber to PIE in 1981 by M.P. Geoffrey Dickens, who also reportedly raised the national security risk of Hayman’s proclivities, implying they were a potential source of blackmail sought by intelligence agencies.

The British tabloid The Mirror reported that intelligence agencies, including the KGB and CIA, kept their own dossiers on U.K. establishment figures involved with PIE and the abuse of minors, to blackmail the targets in exchange for information.

Hayman was never charged for his association with PIE: The U.K. attorney general at the time, Sir Michael Havers, defended the decision and denied claims that Heyman was given special treatment.

Labour Party MP Barbara Castle allegedly gave a dossier she compiled on pedophiles in positions of power to U.K. journalist Don Hale in 1984 when he was editor of the Brury Messenger. Hale alleged that soon afterward, police from the “Special Branch, the division responsible for matters of national security,” raided his office and removed the Castle dossier. They then threatened him with a “D-notice,” which prevented him from publishing the story on the threat of up to 10 years in prison.

Another group accused of trafficking children, which had links to intelligence agencies, was the “Finders” cult. In 1987, The Washington Post reported that two members were arrested in connection with the alleged abuse of six children. Investigators found materials in Madison County, Virginia, which they said linked to a “commune called the Finders.”

Besides nude photographs of children, a Customs Service memo written by special agent Ramon Martinez refers to files “relating to the activities of the organization in different parts of the world, including “London, Germany, the Bahamas, Japan, Hong Kong, Malaysia, Africa, Costa Rica, and Europe.”