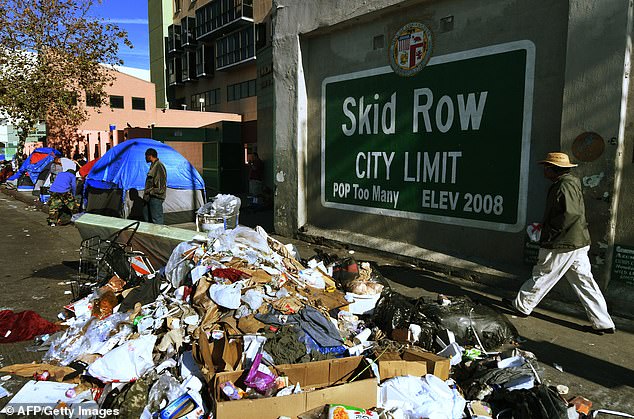 From Daily Mail: An explosion of rats in Los Angeles has lead to a surge in cases of Typhus and could pave the way for a public health crisis.

According to Reform California, there have been 124 confirmed cases of Typhus in LA County this year.

On top of the increase in Typhus cases, experts fear the return of a disease that wiped out a third of Europe in the 12th century, the Bubonic Plague.

Though the city has only three confirmed cases of the plague in the past 40 years, the conditions on the streets of LA make it a perfect breeding ground for plague carrying rats.

The reason for such a large influx of rats is largely attributed to the city’s increasing homeless population.

According to Dailywire, people living on LA streets grew by 16 per cent between 2018 and 2019. They added that the amount of people without somewhere to live has caused sanitation in problem areas to fall short with trash and feces piling up on the street.

These conditions can attract rodents and cause a perfect breeding ground for rat-borne diseases.

California’s governor, Gavin Newsom, acknowledged the city’s severe sanitation problem, astonished that a medieval disease could be making its rounds in a modern city like LA.

Typhus is most likely to be found in people in close proximity to rodents but other stray animals like cats and opossums also carry the disease. Symptoms typically begin within two weeks of exposure and can include chills, nausea, vomiting, body aches, loss of appetite, stomach pain and rashes.

Without treatment, Typhus can eventually lead to organ failure and death.

Plague, though not as deadly as it was 600 years ago, can still be fatal if left untreated. The most famous symptom is a large pus-filled swelling or ‘bubo’ which grows in the groin or under the armpit. This is usually accompanied by seizures, muscle cramps, fever and chills.