Simpsonville, SC — In case after corrupt case, we have reported on police officers who shoot and often kill entirely innocent people — on video — and face no consequences. Even when they are caught lying about what actually happened, the officers involved in the shooting and the subsequent cover up, are almost never held accountable. Case in point, the following story out of South Carolina in which a cop walked up to an innocent man’s home, shot him through the window, lied about it, and the department ruled that he “broke no laws.”

On the night of June 14, 2019, Dick Tench and his wife were sound asleep when Greenville County deputy Kevin Azzara walked up to the couple’s home, rang the doorbell and then shot Tench four times before he could even open the door. The entire scene was captured on the officer’s body camera, and department’s original version of events did not match the video at all. Despite the blatant discrepancies between what the department claimed happened and what actually happened, Azzara was ruled justified in his actions this week.

Since that night, Azzara has been on paid vacation. However, he will now return to regular duty.

“That was our position from the beginning, that he broke no laws, he broke no policies, he didn’t do anything wrong,” Michael Laubshire, an attorney with the South Carolina Fraternal Order of Police who is representing Azzara, told The Greenville News.

According to the department’s original “official story,” when Azzara came to the door, Tench opened up the door and pointed a gun at the deputy. However, after you watch the video below, you can clearly see that this is not the case at all.

Tench never even had a chance to open the door and was merely looking through the window when the trigger happy deputy opened fire on him.

“The Sheriff’s Office’s statement for weeks after the shooting was that my client opened his front door and aimed at a deputy and you can look at that body cam – that ends that version,” attorney Beattie Ashmore told The Greenville News last week after the Sheriff’s Office released the clips of footage. “It’s difficult to explain how something like this could have happened.”

For several weeks after the shooting, the department protected the deputy’s identity by refusing to name him. Now, however, after they cleared him, Azzara was named this week.

As the video shows, the sound on the body camera is silent for the first 30 seconds, including when the deputy fired his gun. It never shows the door open, completely blowing the department’s claims out of the water. However, the audio does pick up the conversation after the shooting, clearly showing the irresponsible nature of the deputy and the department.

After he was shot, Tench yells to his wife to “call the cops!” The deputy then responds, “I am the cops!”

“Who are you? Why are you here?” asks Tench as he sits on the ground with multiple bullet holes in him.

“I saw lights and I heard the door bell ring, so I got my gun. I’m a concealed weapons guy.”

Several seconds later, Tench asks, “Why did you do that?” and the deputy responds, “You pointed a gun at me, man.” The man replies, “Dude, you came to my house at 12 o’clock at night, I’m sleeping. [Expletive], I’ve got to protect my house.”

The deputy then tells him that someone hit a panic button on an alarm. But the Tench’s don’t have an alarm.

“We don’t have an alarm,” Tench says. 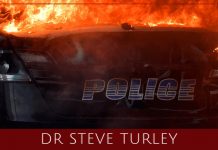