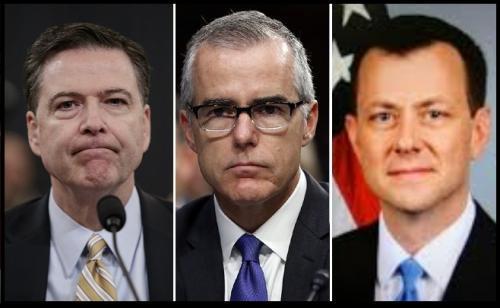 President Obama’s FBI, ran by disgraced former director James Comey, knew about – but purposefully ignored – “highly classified” evidence in the Hillary Clinton email investigation before they downgraded their initial assessment of her crime from a felony to a “grossly negligent” mistake.

As The Hill‘s John Solomon reports, a Senate staff memo updating an ongoing inquiry by Sens. Chuck Grassley (R-IA) and Sen. Ron Johnson (R-WI) reveals that the FBI decided to back off their pursuit of this damning evidence “even though the agents believed access to the sensitive evidence was “necessary” to complete the investigation,” writes Solomon.

What’s worse, Trump’s DOJ has known about this egregious failure of justice since at least 2018 thanks to a classified report by the agency’s Inspector General Michael Horowitz, who explained what happened in a briefing.

But Johnson and Grassley have been unable to get answers for a year, even from Attorney General William Barr, about whether the FBI intends to look at the critical evidence it skipped back in 2016.

The Senate staff memo succinctly lays out just how egregious the FBI’s decision was in 2016.

The inspector general’s “appendix raised a number of serious questions because, as explained on page 154 of the unclassified DOJ IG report, the FBI decided not to seek access to certain highly classified information potentially relevant to the investigation despite members of the FBI case team referring to the review as a ‘necessary’ part of the investigation,” the Senate staff wrote. –The Hill

“As a result of the findings in that appendix, Senator Grassley wrote a classified letter to DOJ on October 17, 2018, which remains unanswered. On January 15, 2019, at Mr. Barr’s nomination hearing, Senator Grassley asked Mr. Barr if he would answer the letter, if confirmed, to which he attested, ‘Yes, Senator.’ On April 16, 2019, Senators Grassley, Johnson, and Graham sent a letter to Attorney General Barr reiterating the need for a written response to that letter,” reads the note.

Now-fired FBI agent Peter Strzok (who is now suing the DOJ over his ouster) was responsible for downgrading the language regarding Clinton’s conduct from the criminal charge of “gross negligence” to “extremely careless.”

18 U.S. Code § 793 “Gathering, transmitting or losing defense information” specifically uses the phrase “gross negligence.” Had Obama’s FBI used the phrase, they would have essentially declared that Hillary had broken the law.

Perhaps the FBI decided not to pursue Hillary’s “highly classified” evidence in order to avoid having to stick with “gross negligence.”

Notably, FBI General Counsel James Baker thought Clinton should face criminal prosecution, but was talked out of it at the last minute.

Meanwhile, there’s no doubt that the FBI’s anti-Trump / pro-Clinton bias played a role in their decisions.

And in a passage that often gets overlooked by reporters and pundits alike, IG Horowitz concluded in his final report about the Clinton email caper that the anti-Trump biases that FBI agent Strzok and bureau lawyer Lisa Page expressed in text messages may have affected their decision-making to focus more urgently on the now disproven Trump-Russia collusion allegations rather than to finish work on the former secretary of state’s email problems, an investigation code-named Midyear.