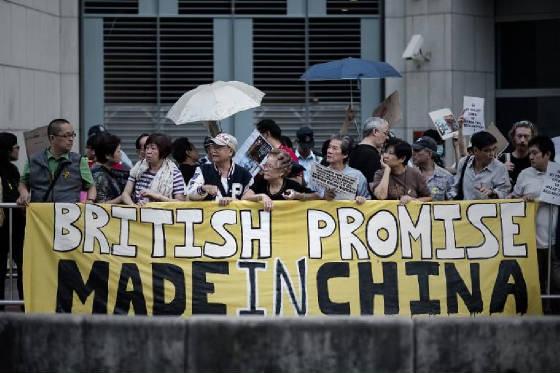 What a long yesteryear between the British Empire and the Chinese Dynasty. The English Crown used the Opium Wars to subjugate the Red Dragon and keep it at bay. A brief summary of the East India Company and the HSBC Bank: Secret Origins To Laundering The World’s Drug Money is crucial to understand the role of the City of London in establishing a global trading cartel.

“As the opium and other trade with China expanded, Britain’s new territory of Hong Kong became a major imperial commercial center. The opium dealers gathered together to form a bank, the Hongkong and Shanghai Bank, as the financial flagship of the British opium trade. Over time, the bank—now known as HSBC—would extend its reach into the drug fields of the Middle East and Ibero-America, as befitting its role as the financial kingpin of Dope, Inc.”

At the end of World War II, the Maoist revolution finally defeated Chiang Kai-shek who fled to Taiwan. The masses are unwilling to accept that Red China is a Creation of Globalists. Any realistic political analyst would anticipate that Hong Kong was slated for future integration with mainland China. Since Britain is a hub of European influence in Asia, but a mere memory of imperial power, a capitulation agreement was entered into. Read a detailed account of the Sino-British Negotiations and the Sino-British Joint Declaration.

Note The Sino-British Joint Declaration, a legally binding treaty at the United Nations, places responsibilities on the United Kingdom to protect these rights and freedoms:

“The current social and economic systems in Hong Kong will remain unchanged, and so will the life-style. Rights and freedoms, including those of the person, of speech, of the press, of assembly, of association, of travel, of movement, of correspondence, of strike, of choice of occupation, of academic research and of religious belief will be ensured by law in the Hong Kong Special Administrative Region. Private property, ownership of enterprises, legitimate right of inheritance and foreign investment will be protected by law. (Article 3.5 of the Sino-British Joint Declaration)”

The current protest by Hong Kong pro-democracy supporters to maintain their freedoms and natural rights, encoded within the British tradition, won’t end in a body count of 250 to 7,000 people that lay dead in Tiananmen Square. If Red China wants to subdue Hong Kong, another Great Leap Forward may be on the horizon.

What will the Boris Johnson government do under this affront to guarantee the one country, two systems provision? Internal pressure within the UK government is building as reported in Hong Kong activists and British MPs join calls for Boris Johnson to intervene.

“What is happening in Hong Kong is truly a human rights crisis in the making,” said MP Heidi Allen, in a message read to the crowd. “We mustn’t allow China to use this as an opportunity to bully us into submission, and relinquish our responsibilities.”

“This slow erosion of your freedoms is precisely what the Sino-British Joint Declaration was supposed to avoid when Britain signed that agreement in 1984,” said Tom Watson in a recorded address.

The extradition proposal “clearly breaches that understanding and starts to align Hong Kong’s legal system with that of China; this is not acceptable,” he added.

Mr Johnson and other British officials have already called on China to continue recognising the Joint Declaration as the protests continue. In 2014, China called the agreement a historical document with no present significance, worrying many that the freedoms long enjoyed in the former British colony were gradually disappearing.”

Nice words, but it was the British who originally handed over Hong Kong to the Chinese mainland Communists.

The globalists over at The Spectator present a different viewpoint in the accountWhy mainland Chinese sees Hong Kong protestors as traitors.

“We find it easy enough to criticise Boris Johnson while remaining proud of being British. But while the fortunes of British prime ministers and their respective parties wax and wane, it’s different in China. The Chinese Community party has been there for the better part of a century. And it isn’t going away any time soon. For many mainlanders, it’s no easy task to extricate what’s communist and what’s just Chinese.”

It is doubtful that one will find many Hong Kong residents agreeing with the propagandistic Marxist dogma from educated Beijing loyalists. Then again, the Brits have a long record of talking the King’s English, while sidestepping the commitment to fulfill their treaty obligations. Heed well, the brilliant saga perspective of Michael F. Scheuer in his article, Mr. President, stay away from Hong Kong, it’s a trap Britain laid for America.

“The bottom line here is that British government leaders knew that once Hong Kong was awarded to the butchers of Beijing, there was nothing the UK could do to stop China if it reneged on its pledge to leave Hong Kong more or less alone for 50 years. Despite the protective-language that Britain’s political grandees used as they dumped the people of Hong King into China’s murderous maw, the Brits knew that their words were lies exactly the same as those they used to pledge to come to Poland’s aid in the late-summer of 1939. The truth is simply that Britain knew that it could not fulfill its 1939 pledge to help the Poles stop the Nazis from invading Poland and slaughtering Poles, and it knew that its implicit 1997 pledge of protection would not stop the Chinese communists from invading and occupying Hong Kong and thereafter tormenting its people in the name “reeducating” them.”

The alternative to a British abdication of their responsibility is provided by Marc Thiessen in his column, Trump can save Hong Kong — Here’s what he should do.

“Trump should also tell Xi that if he cracks down, the United States will welcome Hongkongers as refugees. Hong Kong is the most economically vibrant city on Earth, filled with hardworking, creative, entrepreneurial people — precisely the kind Trump has said he wants coming into our country. If China does not want them, Trump should say, we’ll happily take all their entrepreneurial energy and creativity here in America.”