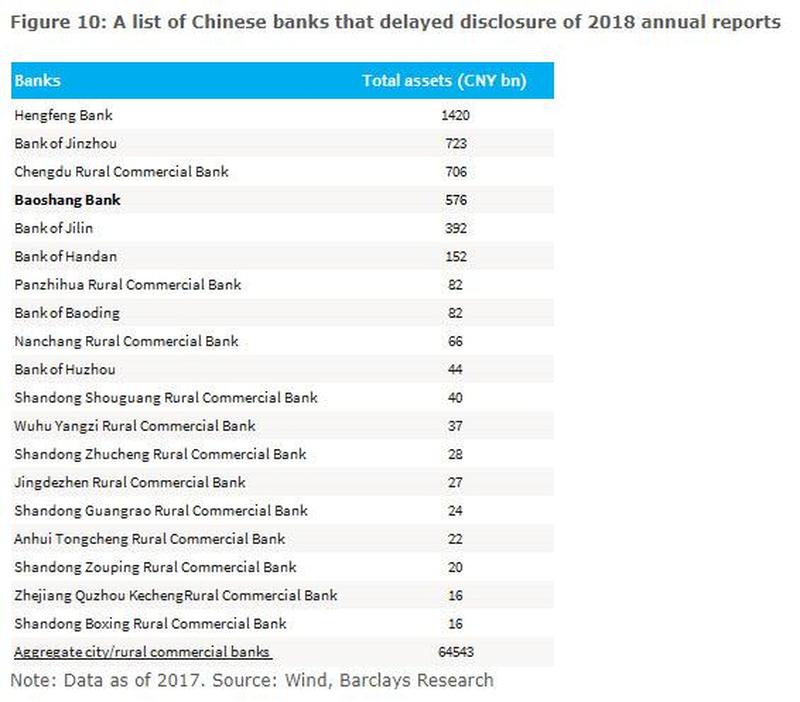 Last month, when reporting on the imminent failure of yet another Chinese bank in the inglorious aftermath of Baoshang Bank’s late May state takeover, we dusted off a list of deeply troubled Chinese financial institutions that had delayed their 2018 annual reports..

… and noted that the #2 bank on this list, Bank of Jinzhou recently met financial institutions in its home Liaoning province to discuss measures to deal with liquidity problems, and in a parallel bailout to that of Baoshang, the bank was in talks to “introduce strategic investors” after a report that China’s financial regulators are seeking to resolve its liquidity problems sent its dollar-denominated debt plunging.

To be sure, there was some token debate over the semantics: was this bailout a nationalization or a state-bank funded takeover:

“For Baoshang Bank, the government took a state takeover, while for Bank of Jinzhou, the government introduced some state-owned strategic investors,” said Dai Zhifeng, analyst with Zhongtai Securities Co; in reality both were government rescues, only in the latest case Beijing used state-owned bank intermediaries.

“The latter approach is more market-oriented and showcased the determination of regulators to resolve problematic banks, while injecting confidence into the market,” Dai said, although when stripped of all the pig lipstick, what just happened in China is that another major bank, one with $100 billion in assets, just collapsed and received a government-backed rescue.

The bigger problem, and the reason why Chinese bank stocks have tumbled ever since the Baoshang Bank bailout, is that investors (and depositors) were worried that now that Beijing has started down the path of bank bailouts, it was unclear where it would stop.

And so, fast forward to this week when overnight, the SCMP reported that China’s sovereign wealth fund has taken over Heng Feng Bank – the bank at the very top of the list shown above, one with roughly $200 billion in assets –  a troubled lender linked to fugitive financier Xiao Jianhua, in the third case in as many months of the state exerting its grip over wayward financial institutions.

According to the report, Central Huijin Investment, a subsidiary of the China Investment Corporation that acts as the Chinese government’s shareholder in the country’s four biggest banks, emerged as a strategic investor in Heng Feng, according to a brief report overnight by Shanghai Securities News, published by state news agency Xinhua.

The investment was a breakthrough in Heng Feng’s debt restructuring led by the Shandong provincial government, the state-owned newspaper said, without citing a source or providing financial details. Huijin’s investment would increase Heng Feng’s capital adequacy, improve the troubled bank’s management and enhance its operational capability, the paper said.

In short, a 3rd Chinese bank in as many months received an implicit (or explicit) state bailout, and with the dominoes now falling, it’s just a matter of time before most if not all of the banks shown in the list above collapse.

Some more details on bailout #3:

Heng Feng, based in Yantai city, was founded in 1987. It operated 18 branches and 306 sub-branches across the country. It is among more than a dozen city-level and rural lenders that had been put on notice by the authorities for a shake-up, as regulators step up their programme of cleaning up financial malfeasance and profligate lending.

It’s also the second of several banks in Xiao’s financial empire to be put under state ward, after the May 24 nationalisation of Baoshang Bank in Inner Mongolia’s Baotou city. As we reported back in May, Xiao’s Tomorrow Group, which owned 89% of Baoshang, had misappropriated large sums from the bank, triggering serious credit risks that prompted the government to step in, the central bank said. Xiao himself had not been seen in public since he was persuaded to return to mainland China from Hong Kong on the eve of the 2017 Lunar New Year to help with investigations into his financial affairs. Like so many other former oligarchs, he simply disappeared somewhere deep inside China’s “corrections” apparatus.

As the SCMP notes, at its apex, Tomorrow Group owned stakes via proxies in hundreds of Chinese listed companies, including at least 10 banks, the China Banking & Insurance Regulatory Commission said on June 9.

It all ended with a bang, however, with the Baoshang Bank  seizure in late May.

The change in strategy, where Beijing was now openly seizing or bailing out insolvent banks – Baoshang was the Chinese government’s first nationalisation of a private bank since 1998 – led to a collective collapse in the stock prices of China’s listed banks, driving their valuations to record lows, amid fears that the shakeout would affect more lenders, and that the largest and best capitalized institutions would be called upon to bail them out.

That’s precisely what is happening right now, and unfortunately it’s about to get worse for a simple reason that was all the rage back in 2015 – namely the soaring amount of Chinese NPLs, a number which has been drastically massaged by the banks, regulators and politicians, to make China’s banking system appears safer than it was (see ”
CLSA Just Stumbled On The Neutron Bomb In China’s Banking System“). As the SCMP notes, the level of non-performing loans among local lenders licensed to operate within city of urban centres were at 1.9% of their total lending at the end of March, worse than their larger peers, according to CBIRC data. The real number is likely orders of magnitude higher.

These local, city banks were also the least capitalised among all bank categories, with 12.6% capital adequacy ratio, compared with 18.3% in foreign banks.

It gets even worse when one looks at China’s rural commercial banks, which are licensed to serve villages and smaller towns, and which had 4.1% of their lending classified as bad loans, CBRC data showed. That compared with the 1.1 per cent average among larger nationwide commercial banks, and 0.8 per cent among foreign banks, the data showed. None of those numbers is remotely close to reality, and with China’s economic growth now sliding, it is just a matter of time before things get far worse.