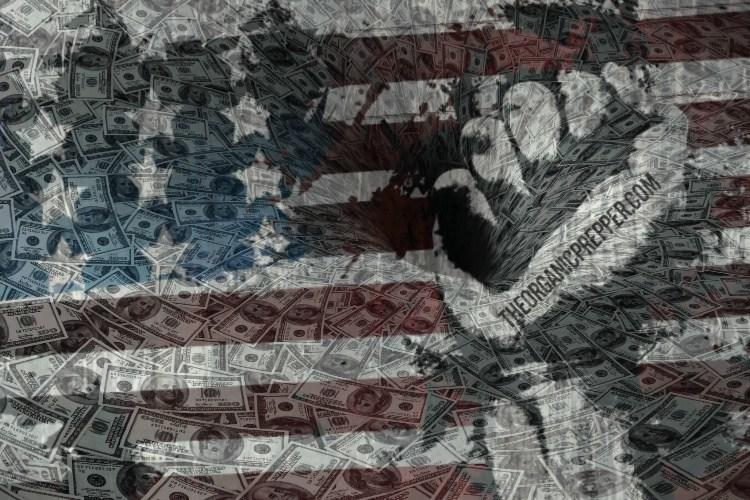 You may have noticed lately that the mainstream websites look an awful lot like alternative news sites, trumpeting the economic demise of America. For years, we in the alternative media have been warning our readers to look out because we never really recovered from the 2008 “Great Recession.” We’ve said, “The collapse is already here” only to be blown off by the mainstream as kooks. “Don’t worry,” they said. “Everything is fine,” they said.”

Only in the past year has talk of recession begun to break out, and only in the past couple of weeks have outlets become aggressive in pushing the notion that a financial crash is just around the corner. The reality is that if one removes the illusory support of central bank stimulus, our economy never left the “Great Recession” of 2008. (source)

This is not to say our economy is in good shape – anyone paying attention knows that we’ve had bad signs for the economy for years, such as stores closing and people being unable to pay their bills. However, as the 2020 election draws near, it’s certainly politically convenient to announce the advent of another recession.

What evidence is there of an economic crisis?

There are all sorts of things going on right now that would make even the most steadfast non-worrier break a sweat. Michael Snyder outlined 11 of them in this article, but four in particular, are of note.

Last week, the “spread between the U.S. 2-year and 10-year yields” turned negative for the very first time in 12 years.  An inversion of the yield curve has occurred prior to every single U.S. recession since the 1950s, and this is one of the most important economic signals that we have seen yet…

…Just like we witnessed in 2008, fear and volatility have returned to Wall Street in a major way.  In fact, so far this month we have already seen the 4th and 7th largest single day point declines in U.S. stock market history…

…According to the Federal Reserve Bank of New York, the probability that a recession will happen within the next 12 months is now the highest that it has been since the last financial crisis…

…President Trump is suggesting that the Federal Reserve should cut interest rates by 100 basis pointsand that the Fed should restart quantitative easing as soon as possible.  Both of those moves would be considered to be “emergency measures” that should only happen if a major economic downturn was imminent. (source)

There are other issues too. For example, just as President Trump added a whole bunch of tariffs to imports from China, our farmers have had a devastating year due to weather. We can look for food prices to climb dramatically as soon as this fall. Photos from all over the country show empty gaps on grocery store shelves. Families are barely getting by and all it takes is one unexpected expense to send some into a tailspin of poverty. The most-searched-for article on my website for the past 2 months has been this onewith the post getting hundreds of hits per day from people who are clearly struggling.

Why is the recession becoming “official” now?

As we head into the 2020 election cycle, it would certainly be convenient to pin an economic disaster on President Trump. Back in August of 2016, Brandon Smith of Alt-Market called exactly this. (Emphasis mine.)

I submit that there is in fact a wider economic crisis on the way, and that the elites plan to use the Brexit and Trump as scapegoats for this crisis.

I have stated this before, but I think the idea needs repeating:  The globalists need the economy to turn unstable in order to create a rationale for a centralized economic authority and a single global currency system.  This is why they have consistently called for a “coordinated global central banking policy” after the Brexit.  This is why they continue to warn of a fiscal crisis even though stock markets remain at all-time highs.

If Hillary Clinton, a well known globalist puppet deep in the bedrock of the establishment, wins the election only to have the economy tank, then the globalists will get the blame.

If Trump is either allowed in office, or is placed in office, and the economy tanks, CONSERVATIVES, the primary enemy of the globalists, will get the blame for the resulting crisis.

To reiterate, the globalists have created the conditions by which an economic crisis can be triggered at the time of their choosing (within certain limits).  They are then either supporting the success of seemingly conservative based movements and candidates, or simply refusing to interfere with them.  This is being done so that the globalists can then blame the crash they created on conservative movements.

This allows them to demonize not just conservatives, but the conservative philosophy in general; labeling it a poisonous ideal akin to fascism.  Their solution?  Erase all elements of conservatism and sovereignty from society for the sake of the “greater good” of the collective.

This is part of the long game. (source)

Note that the article above was written when everyone was pretty sure Hillary Clinton would be the next president. Heck, most of us were absolutely stunned on election night when Trump was named the winner.

The timing of this hullabaloo sure is convenient.

So why in the world is the MSM finally agreeing with the alternative media that we’re on the cusp of a crash? Well, it’s certainly convenient timing as we head into the 2020 election cycle. And I have to quote Brandon Smith again because whether I agree with him politically or not, there’s no doubt that he is absolutely brilliant when it comes to these types of predictions. (Emphasis mine.)

The media should have been reporting on economic crisis dangers for the past 2-3 years.  But, they didn’t give these problems much credence until recently.  So, what changed?

I can only theorize on why the media and the banking elites choose the timing they do to admit to the public what is about to happen. First, it is clear from their efforts to stifle free discussion that they do not want to let the populace know too far ahead of time that a crash is coming. According to the evidence, which I have outlined in-depth in previous articles, central banks and international banks sometimes engineer crash events in order to consolidate wealth and centralize their political power even further. Is it a conspiracy? Yes, it is, and it’s a provable one.

When they do finally release the facts, or allow their puppet media outlets to report on the facts, it seems that they allow for around 6-8 months of warning time before economic shock events occur. In the case of the current crash in fundamentals (and eventually stocks), the time may be shorter. Why?Because this time the banks and the media have a scapegoat in the form of Donald Trump, and by extension, they have a scapegoat in the form of conservatives, populists, and sovereignty activists.

The vast majority of articles flowing through mainstream news feeds on economic recession refer directly to Trump, his supporters and the trade war as the primary villains behind the downturn. The warnings from the Fed, the BIS and the IMF insinuate the same accusation. (source)

If the financial walls come tumbling down under President Trump’s watch, pretty much anyone could beat him in the next election. And this could be a very dramatic change with very real and personal results. If you think you’ve got trouble making ends meet now, just you wait. If you think our laws are restrictive and Big Brother is all over us now, you ain’t seen nothin’ yet.

Will this put a left-wing extremist president in office?

If things continue in this vein, I can’t imagine that President Trump will get a second term. And his potential replacements could be anathema to an independent American way of life. (Emphasis mine.)

The pace of the narrative is quickening, and I would suggest that a collapse of the bubble will move rather quickly, perhaps in the next four to six months. If it does, then it is likely that Trump is notslated for a second term as president in 2020. Trump’s highly divisive support for “Red Flag” gun laws, a move that will lose him considerable support among pro-gun conservatives, also indicates to me that it is likely he is not meant to be president in 2020.  This is another sign that a massive downturn is closing in.

As events are unfolding right now, it appears that Trump has served his purpose for the globalists and is slated to be replaced next year; probably by an extreme far-left Democrat.  There are only a couple of scenarios I can imagine in which Trump remains in office, one of them being a major war which might require him to retain the presidency so the globalists can finish out a regime change agenda in nations like Iran or Venezuela.  This could, however, be pursued under a Democrat president almost as easily as long as Trump and his elitist cabinet lay the groundwork beforehand.

As in 2007/2008, it is unlikely that the mainstream would admit to a downturn that is not coming soon. Using the behavior of the media and of banking institutions as a guide, we can predict with some measure of certainty a crisis within the economy in the near term. Clearly, a major breakdown is slated to take place before the election of 2020, if not much sooner. (source)

Let’s remember quickly what happened in Venezuela right before all hell broke loose there. It was in 2012, only 2 years before the economic collapse became evident to everyone when the Venezuelan government confiscated people’s guns. Shortly thereafter, the government cracked down on “hoarders” and silenced dissent. And we all know what happened next.

What’s next for the United States of America?

I was talking to my 18-year-old daughter yesterday and it was the saddest conversation.  The America I grew up in is certainly not the one that she inherited. She said:

When you were going to school, kids had guns in the back window of their trucks in case they wanted to stop and shoot dinner on the way home. Now, we all know that anyplace we go, we could be shot at any time because that’s the world we live in. We live somewhere that you can’t even go to Walmart or a music concert without risk. You and your friends didn’t have to think about stuff like this when you were my age.