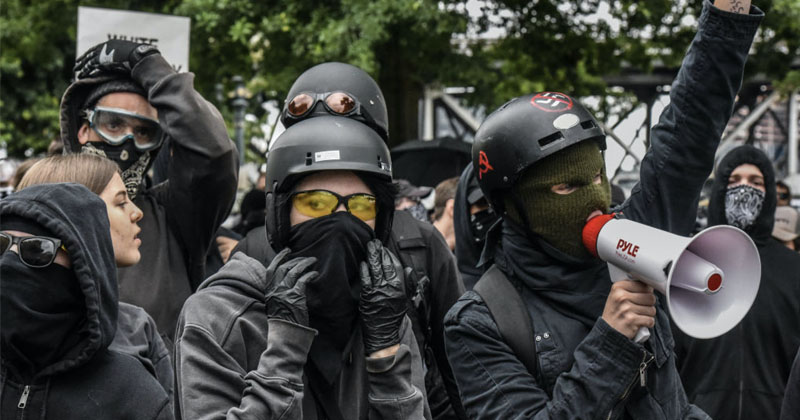 The domestic terrorist organization known as Antifa carried out attacks at a “right-wing” rally in Portland, Oregon on Saturday by targeting peaceful rally goers, police, and members of the press. As the liberal media have done in the past, ABC’s Good Morning America and NBC’s Sunday Today, carried water for the extreme left-wing terrorists by downplaying their actions and by suggesting they’re simply “counter-protesters”.

ABC’s coverage was absolutely abysmal. With an on-screen headline that suggested the “right-wing” was responsible for the violence, GMA co-anchor Dan Harris offered up just a news brief that lasted just 22 seconds:

DAN HARRIS: Meanwhile, violent street confrontations in Portland, Oregon, 13 people arrested, six injured, when more than 1,000 right-wing demonstrators and counter-protesters descended upon the downtown area. Police say that they were pelted with water bottles while making an arrest there. Officers also confiscated a number of weapons, including knives, shields, and stun guns.

Throwing water bottles was arguably among the least of Antifa’s tactics. According to footage of their attacks, Antifa assaulted a bus filled with the “right-wing” marchers (as they were trying to leave the even) and tried to beam people in the head with a hammer.

They were also targeting reporters and threatening their wellbeing, as they did with Washington Examiner reporter Julio Rosas. The terrorists also beat one middle-aged man unconscious and, as Quillette reporter Andy Ngo reported, there were no police in sight.