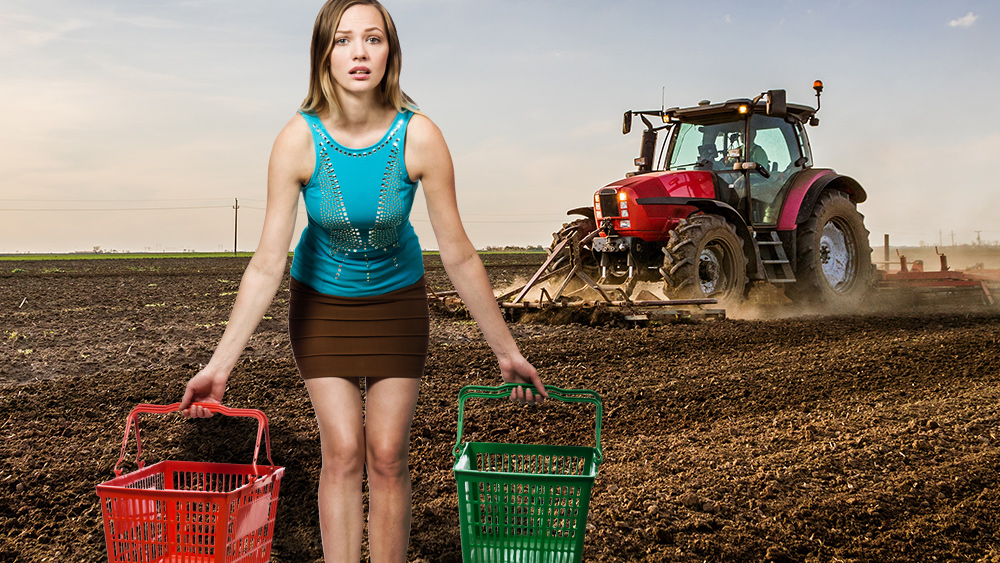 That Washington D.C. rag of a newspaper “WaPo,” has admitted in their own authored and posted article that the monster food retailer Whole Foods, now with over 400 stores, might start “demanding concessions from small farmers and vendors” so they can … wait for it … wait for it … “lower the costs of Whole Foods’ products.”

Since local farmers’ margins are already anemically thin, the new price cuts could cripple those producers overnight. It’s a big threat that’s looming, as Jeff Bezos looks to turn America into a Socialist hellhole as soon as possible.

That means that not only does Whole Foods NOT label their GMOs like they promised for years, but they’re about to cut the local farmers’ profits to nearly zero, while Amazon annihilates small and mid-sized businesses across the United States with their monopolistic “deals.”

This price-reduction pressure will squeeze small organic farms right out of the stores, while the larger organic food manufacturers simply import cheap, adulterated and heavy-metal-infested “organic” foods from China. China is an industrial nightmare and the USDA does not inspect “certified organic” foods for heavy metal toxins like lead, aluminum, tungsten, mercury, nickel, and the list goes on.

Whatever Amazon wants, Amazon gets. That includes Whole Foods Markets, that are all owned by the richest dude in the world, Jeff “Bozo” Bezos. Want to sell your local produce at Whole Foods? Just apply today and sign away your profits to the wealthiest communist on Earth. No more investing in quality or R&D for you, because you can’t afford it.

All aboard those corporate rails! Field inspectors for Whole Foods are hard at work seeking out more local farmers (by the way, that term means you can be an entire day’s travel away), who like giving away their food at cost to support Jeff Bezos’ demented world of pedophilia books and Drag Queens (convicted child molesters, mind you) that Whole Foods now pushes on children.

As Jeff Bezos slashes prices and jobs at Whole Foods, Walmart and Wegmans’ move in for the “kill.” The monopolies of GMO and Big Food Organic will only become more powerful as they slash profits for small-to-mid-sized farm businesses.

The globalist goal is to install Socialism (Communism) and erase the middle class, all entrepreneurs, all small businesses, and eventually turn all food and medicine in America toxic. That’s where the big money is, and it’s more than obvious the sinister plan is in full swing.

Get ready for robot cashiers and automated machines creepily rolling around Whole Foods. “Welcome to Whole Foods sir and ma’am, may I offer you some GMOs or blood-clogging canola oil? Please mosey on over to the canola oil food bar and eat up. Also check out our local produce that’s cheap as dirt!”

Yes, manual labor is getting minimized at Whole Foods thanks to sensor technology. Take a long, hard look at the Seattle stores that may soon operate with as few as THREE human beings.

So why then are sales still slumping at most Whole Foods Markets? Maybe because they lie about their ingredients and they’re just greedy bastards, just like the folks that control their hedge funds. It’s all just big business bureaucracy and no place for small farmers anymore.

Go to the Whole Foods website and you’ll see lots of propaganda, including punchy little cute stories about local farmers who ship their produce to Hellhole foods via the Amazon railways. But what you won’t see on their website are the truths about farmers like Farside Farms’ Mike Brown, who says his eggs will no longer be sold in Whole Foods stores. His eggs are rotting away while waiting for the bureaucratic red tape to end – which it never does.

Panic Buying Now? A Lot of Alarm Bells That US Housing Bubble Is Almost Back To 2006-2007 Levels

The Markets Are Rigged