YouTube has removed a video of Tommy Robinson addressing his supporters from this reporter’s channel, claiming that it violates their “hate speech policy.”

The video was pre-recorded to be released in the event that he went back to prison. 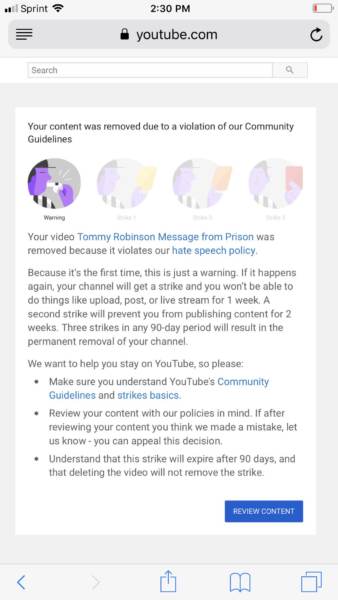 On Thursday, Robinson was sentenced to six months in prison for three counts of contempt of court. There can be no argument that the video wasn’t newsworthy.

In the video, Robinson discusses his case as well as grooming gangs and the importance of speaking up for the victims. When the sentence was handed down, I published the video to my channel to be able to embed it in a story. It was unlisted and could only be viewed by people with a direct link.

“So, I’m in prison — for the crime of journalism,” Robinson began in the pre-recorded video, “for exposing Muslim pedophile rapists.”

Robinson continued on to say that “British journalists don’t seem bothered about this at all. They are puppets of corporate globalist media. In fact, they’re not even journalists. They’re activists.”

Tommy Robinson recorded a video to be released only if he was sent back to jail. In it, he calls for people to fight back by any means necessary.

He has just been sentenced to six months in prison.https://t.co/y59sXzITlA pic.twitter.com/qZcZN9nKsG