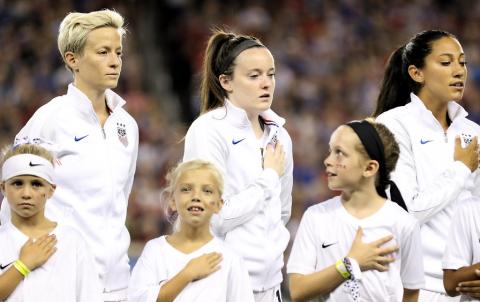 In the run through the World Cup, I was originally celebrating the USA women’s team and their success as an example of American excellence as a time when I felt the country needed this kind of symbolic victory. However, the star of the team, Megan Rapinoe, has so tarnished the reputation of the team that many Americans will never watch the women’s team again, no matter how many World Cup championships they win. Please note in the cover photo that Rapinoe, pictured on the left, is the only one not covering her heart as the National Anthem is being played in a profound display of disrespect.

Megan Rapinoe has lost her sanity, or perhaps she was never sane. Her obnoxious ways have diminished the great accomplishment of the team. Rapinoe is the team bully and presumes to speak for the entire team. She doesn’t, she only intimidates most of the team into silence as she spews her hate-filled rhetoric. Rapinoe has alienated most of America who would have loved to have supported the team’s glory, but now, will not. Rapinoe’s statement that the team would not have won if it were not for the gay players, is ludicrous. Since when does sexual preference correlate to athletic ability? It obviously does not and only one with an extreme agenda would try to advance that viewpoint.

Rapinoe has not only cost herself millions of dollars in endorsements, but she cost her teammates the same as well as attracting more sponsors for future women’s soccer teams.

The fact that Rapinoe, only a player, has determined that the team will not meet with Trump but would meet with Schumer, is very telling. Schumer is now being linked to Epstein’s antics. Is this a case of birds of a feather, flock together?

The illogic and hate-filled agenda of Megan Rapinoe is omnipresent. Psychologically, she is clearly angry at the world. Was she the victim of abusive treatment in her past? One has to ask, because the anger is far out of proportion than what it should be given the circumstances.

I would like to know where is the coach and where is the administration behind the women’s soccer team? There is no way that ALL of the women support Rapinoe’s radical agenda. And even if they did, this was not the place for the extreme expression of disrespect for the USA. Yet, Rapinoe is allowed to use the team as her own sounding board for her very bizarre political views. She attacks Trump in ways that are illogical. Trump has appointed gays to his administration. He has spoken out against discrimination against gays. Under Trump, women have had the greatest increase in salary and employment in our nation’s history. Talk about biting the hand that is feeding you. The hatred of Trump, for many liberals, has become the justification for hating Trump. There is not one valid reason for someone who is gay, or female, to hate Trump. That is absolutely true unless one has an ulterior motive, such as becoming the next Alexandria Ocasio-Cortez. I suspect that Rapinoe has radical political motives and aspirations. She needs something new to move to because her playing days are probably over as she is past her athletic prime.

I watched in horror, in the celebration of the soccer team at the World Cup championship victory, as Rapinoe lifted her leg as she was going to stomp on the flag and one of her teammates quickly picked up the flag off of the ground and avoided the display of disrespect that Rapinoe intended for the American flag.

Rapinoe has stated that she will never again, ever, sing the National Anthem. I would like ask her if she feels any sense of responsibility to demonstrate respect for the brave men and women that risk their lives to preserve the laws that allows an angry despot, like Rapinoe, to spout her un-American views? Does she care that people have died that provide her with the opportunity to spread her illogic and hate?

In her latest tirade, Rapinoe is calling for equal funding between the men’s and women’s soccer teams. If these were salaried employees, Rapinoe might be correct. However, the women brought in an estimated $131 million dollars in revenue. The men’s geam generated $6 billion in revenue. The market rewards production, in any business. If Rapinoe wants to earn the money of men’s soccer, than generate the same revenue stream. Of course, it is clear that Rapinoe sees the world differently. She is a socialist and her views are befitting a Schumer, a Pelosi, and a Hillary Clinton which is why she’s making this outrageous demand and it explains why she only wants to meet with Schumer and Pelosi to celebrate the World Cup victory.

Until the day that the Women’s soccer team administration condemns Rapinoe’s actions, I will never watch another match including the next World Cup. And in the face of the next World Cup, I will encourage all citizens that love America to boycott watching the same. And this is a shame because American exemplerance should be promoted. However, I cannot support anything connected to the despot that we call, Megan Rapinoe.

If Rapinoe was spouting her hate from a conservative point of view, she would be condemned and censored. But because she is anti-American, anti-family and decidedly anti-Christian, her hate speech is celebrated by the MSM.

In my coaching career, I can honestly say that I would never have permitted these radical views and the intimidation of her teammates to exist on any team I coached. It would have been a case of her me in terms of what would be permitted. It should also be apparent where I would place the blame for this international embarrassment named Megan Rapinoe.

Attention America: The Rapinoe nonsense is a glimpse into the future of what life will be like if and when the liberals win the White House in 2020. The Megan Rapinoes’ of the the country will become the norm and will become our proxy leaders on behalf of the Democratic perverts that will be running the country. This is why the MSM is celebrating Rapinoe’s hate. If you do not want to live in Megan Rapinoe’s world, perhaps you should get off of your backside and get active in the upcoming election. Adopt a liberal, do whatever you can because history turns on a dime and if this dime turns, we will see the American Gestapo hauling people out of their homes at 3AM for their political views.