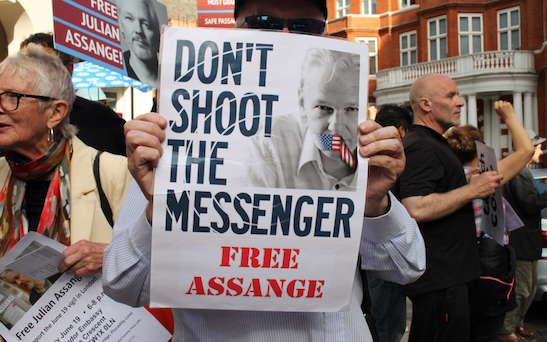 Trump administration officials were enthusiastic when Ecuador decided to expel Julian Assange from its embassy in London, where he had received sanctuary for nearly seven years. British authorities promptly jailed him for jumping bail on sexual assault charges in Sweden, and U.S. officials began plans to have Assange extradited to face espionage charges in this country. He just turned 48 in prison on July 3.

Last month, the Department of Justice added 17 counts to the one-count indictment that it had filed years earlier. His current imprisonment in Britain and the probability of a lengthy extradition battle have delayed the prospect of a high-profile trial in the United States, but that outcome remains Washington’s goal. The United States reportedly submitted a formal extradition request on June 6.

The issues at stake go far beyond whether Assange is an admirable (or even a reasonably likeable) person. He symbolizes a crucial fight over freedom of the press and the ability of journalists to expose government misconduct without fear of criminal prosecution. Unfortunately, a disturbing number of “establishment” journalists in the United States seem willing—indeed, eager—to throw him to the government wolves.

Official Washington’s hatred of Assange borders on rabid. The website WikiLeaks, which he and his colleagues founded in 2006, has published voluminous quantities of leaked documents—in some cases highly classified documents. Those revelations have embarrassed, even discredited, powerful government officials and political factions in the United States and other countries. Among WikiLeaks’s revelations were specifics about the torture of terrorist suspects at CIA “black sites” in the United States and allied countries, and evidence of U.S. war crimes, notably brazen killings of civilians, including two Reuters reporters, in Iraq. Some of the most spectacular news accounts emerged because of leaked documents that a young Army private, Bradley (later Chelsea) Manning had given to WikiLeaks.

U.S. officials were furious about such information becoming public. They not only prosecuted Manning for espionage—eventually imposing a draconian 35-year prison sentence—but they filed an espionage charge against Assange. The ongoing attacks on him are a bid for censorship powers not seen since the Nixon administration sought to prevent The New York Times and The Washington Postfrom publishing the Pentagon Papers. In that case, the U.S. Supreme Court rejected the government’s bid for prior restraint. The ruling did not explicitly address the question of whether authorities could prosecute journalists once a story using classified documents was published. However, a succession of administrations have refrained from pursuing that option, and the prevailing assumption was that post-publication attempts at prosecution might run afoul of the courts as well. Individuals who leak items to the press remained as vulnerable as ever to prosecution for espionage, but members of the press have enjoyed de facto immunity. With the Assange case, that situation threatens to change.

U.S. foreign policy mandarins have sought to overturn or at least dilute the Pentagon Papers precedent from the outset. Their preferred alternative is Britain’s Official Secrets Act. Passed in 1911, that statute prohibits news outlets from publishing any information that the government deems confidential. Following the Supreme Court decision, Dean Acheson, one of the key architects of Washington’s post-World War II foreign policy, called for “a severe Official Secrets Act to prevent irresponsible or corrupt transfer of secret papers from the government to publishers.” During the 1980s and 1990s, hawkish types expressed similar attitudes. Michael A. Ledeen, a special adviser to the secretary of state, enthusiastically endorsed the British model. Ledeen was especially upset by the publication of Bob Woodward’s 1987 book Veil, an exposé of CIA dirty tricks. Ledeen stated that “such a book ought not to have been published,” adding that with an American Official Secrets Act, it would not have been.

Since the 9/11 attacks, such attitudes have grown. An especially outspoken proponent is Republican Senator Tom Cotton of Arkansas. As an Army lieutenant in Iraq in 2006, Cotton became incensed at a New York Times story disclosing the Bush administration’s secret program to disrupt the financing of alleged terrorist organizations. In an open letter, he accused the Times of having “gravely endangered the lives of my soldiers and all other soldiers and innocent Iraqis here.” Cotton asserted that as a Harvard Law School graduate and practicing attorney, he was “well-versed in the espionage laws relevant to this story and others—laws you have plainly violated.” He closed with a chilling wish. “I hope that my colleagues at the Department of Justice match the courage of my soldiers here and prosecute you and your newspaper to the fullest extent of the law. By the time we return home, maybe you will be in your rightful place: not at the Pulitzer announcements, but behind bars.”

There is no indication that Cotton has changed his views since entering Congress. Nor was he alone at the time in wanting to prosecute journalists for disclosing information that might undercut U.S. policy. Republican Representative Peter King of New York blasted the Times for being “treasonous,” as did Republican Senator Jim Bunning of Kentucky.

The United States and other Western leaders became increasingly alarmed about the surge of WikiLeaks disclosures. They worried that whistleblowers were becoming emboldened and might leak information to more respectable media outlets. Their fears were realized in 2013 when Edward Snowden, a contract employee for the National Security Agency, transferred a trove of classified documents to Glenn Greenwald and Laura Poitras at The Guardian. Those documents confirmed that, among other abuses, the NSA undermined private computer encryption programs and collected bulk data on Americans’ emails and other correspondence without obtaining a warrant. Equally appalling, NSA Director James Clapper had lied to Congress and the American people about the program.

The Department of Justice moved quickly to indict Snowden for espionage, but attempting to do the same with Greenwald and Poitras was more difficult. Greenwald especially was a prominent, if controversial, journalist, and going after him risked creating a media firestorm. It seemed more than coincidental, though, that authorities in countries closely allied with the United States (especially Britain) harassed the journalists—and in one case, Greenwald’s romantic partner—with lengthy, menacing interrogations when they traveled internationally.

U.S. leaders have focused their efforts on apprehending and prosecuting Assange, considered a more “fringe” player. But the Obama administration did increase attempts to harass or intimidate journalists who utilized leaked material. Officials conducted electronic surveillance of both journalist James Risen and Fox News correspondent James Rosen in an effort to identify their sources. The government named Rosen as a “co-conspirator” in an espionage case against his source. Similarly, the administration asserted that it had the right to prosecute Risen, even though it chose not to take that step. Those were ominous warning signals.

The government’s strategy in the Assange case is especially insidious. Federal officials argue that whatever the relevance of the Pentagon Papers precedent, it doesn’t apply in this case because Assange is not a real journalist engaged in legitimate journalism. Instead, he is allegedly a co-conspirator with Manning and other individuals who have illicitly leaked classified information. Ergo, he has committed espionage, and any legal protections that legitimate journalists might enjoy should not extend to his behavior. John Demers, the Justice Department’s assistant attorney general for national security, stated that thesis explicitly. “Julian Assange is no journalist,” Demers said. Assange engaged in “explicit solicitation of classified information.”