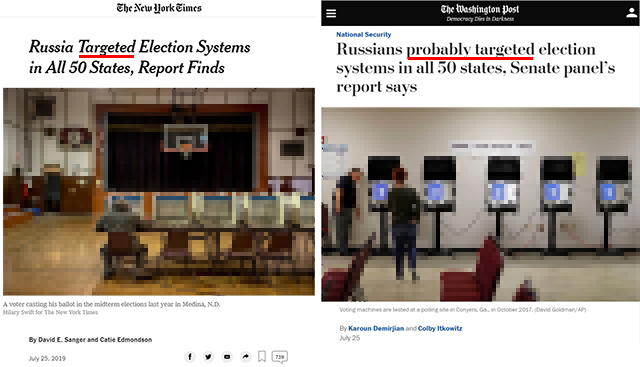 The public must be reminded constantly that we have always been at war with Eastasia.

The Senate Intelligence Committee concluded Thursday that election systems in all 50 states were targeted by Russia in 2016, an effort more far-reaching than previously acknowledged and one largely undetected by the states and federal officials at the time.

But while the bipartisan report’s warning that the United States remains vulnerable in the next election is clear, its findings were so heavily redacted at the insistence of American intelligence agencies that even some key recommendations for 2020 were blacked out.

The report — the first volume of several to be released from the committee’s investigation into Russia’s 2016 election interference — came 24 hours after the former special counsel Robert S. Mueller III warned that Russia was moving again to interfere “as we sit here.”

It also came 24 hours after Mueller revealed he’s never heard of Fusion GPS and seems to be generally “out of it” mentally.

While details of many of the hackings directed by Russian intelligence, particularly in Illinois and Arizona, are well known, the committee described “an unprecedented level of activity against state election infrastructure” intended largely to search for vulnerabilities in the security of the election systems.

It concluded that while there was no evidence that any votes were changed in actual voting machines, “Russian cyberactors were in a position to delete or change voter data” in the Illinois voter database. The committee found no evidence that they did so.