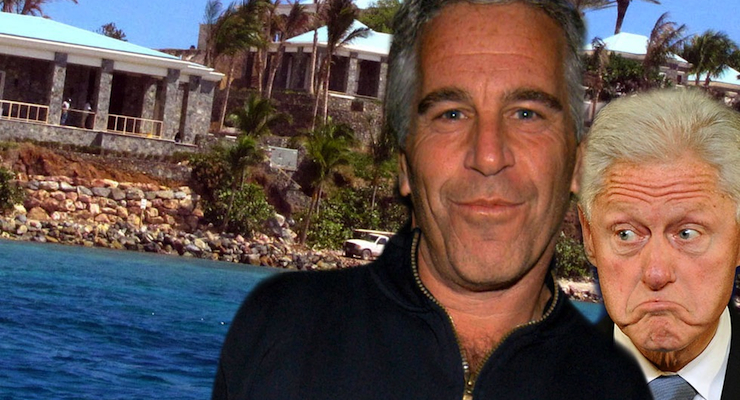 Are we going to believe pilot logs and firsthand eyewitness testimony, or are we going to believe the desperate ramblings of a former president that would do anything to stay out of prison? After everything that he has gotten away with over the last several decades, Bill Clinton probably thought that he was free to enjoy the remainder of his life without having to worry about any more legal troubles. Unfortunately for Clinton, the eyes of the entire world are back on him now that the Jeffrey Epstein sex scandal has blown wide open. Suddenly everyone wants answers from Clinton about the very close friendship that he once had with Epstein, and this forced him to issue a very strongly worded denial…

Clinton’s spokesperson, Angel Ureña, told The Associated Press that the former president took four trips on Epstein’s plane between 2002 and 2003, with staff and Secret Service always onboard. He added that Clinton “knows nothing about the terrible crimes Jeffrey Epstein pleaded guilty to in Florida some years ago, or those with which he has been recently charged in New York … He’s not spoken to Epstein in well over a decade, and has never been to Little St. James Island, Epstein’s ranch in New Mexico, or his residence in Florida.”

Clinton is either incredibly desperate or incredibly stupid, because all of the evidence indicates that he is lying.

Investigative journalist Conchita Sarnoff has been looking into these matters for 9 years. In fact, she has written an entire book about the Jeffrey Epstein sex scandal entitled “TrafficKing”, and she has probably interviewed more people about this case than any other journalist. Previously, Fox News reported that Bill Clinton had taken 26 trips on Epstein’s private plane, but according to Sarnoff the pilot logs clearly show that Bill Clinton was a passenger on that plane 27 different times…

“I know from the pilot logs and these are pilot logs that you know were written by different pilots and at different times that Clinton went, he was a guest of Epstein’s 27 times,” she said, adding that “many of those times Clinton had his Secret Service with him and many times he did not.”

As I discussed in part two of this series, Epstein’s private plane was “reportedly outfitted with a bed where passengers had group sex with young girls”, and he would regularly fly his famous friends down to his private island where there would be more group sex with underage girls. Today we refer to Epstein’s private plane as “the Lolita Express”, and it has been established as a fact that Clinton took many trips on that plane without his Secret Service detail.

So why would he lie about that?

In addition, Conchita Sarnoff says that there is a letter which shows that Jeffrey Epstein gave Bill Clinton four million dollars to help fund the Clinton Global Initiative…

“First of all, Gerald Lefcourt, who was one of Epstein’s attorneys back during the original arrest and the original investigation, wrote a letter which has been made public … In that letter, Gerald Lefcourt claims that Epstein was one of the original funders of Clinton Global Initiative. He gave President Clinton four million dollars, according to a source who knows a story about that.”

It is undeniable that Clinton and Epstein were very close friends, and for Clinton to try to claim that he didn’t know anything at all about Epstein’s crimes is absolutely laughable.

In addition to the pilot logs, we also have eyewitness testimony that Clinton was on Little St. James Island. Virginia Roberts was one of Epstein’s “sex slaves”, and she says that she specifically saw Clinton on the island…

During the trip, she said in the interview, Clinton was there with two of Epstein’s regular girlfriends and “two young girls that I could identify. I never really knew them well anyways. It was just two girls from New York.”

Clinton stayed in one of the “four or five different villas on the island separate from the main house,” she alleged.

“I remember asking Jeffrey, ‘What’s Bill Clinton doing here?’ kind of thing and he laughed it off and said ‘Well, he owes me a favor,’” Roberts alleged. “He never told me what favors they were.”

And although Roberts never slept with Clinton herself, she does claim that she was regular pimped out to many of Epstein’s other famous friends…

Epstein pimped out Roberts and other underage girls to his prominent pals — so he could gather information on them to blackmail them later on, Roberts alleged in a new affidavit.

“Epstein required me to describe the sexual events that I had with these men, presumably so that he could potentially blackmail them,” the now 31-year-old wrote. She added: “I also understood that Epstein thought he could get leniency if he was ever caught doing anything illegal, or more so that he could escape trouble altogether.”

Of course Roberts is far from alone.  The list of Epstein’s victims just keeps growing, and the feds have already interviewed many of them, and they will interview even more of them very soon. In fact, later on tonight I will post part four of this series on The Most Important News, and I will talk about the fact that the feds are claiming that since Epstein’s arrest “several other women contacted them with complaints about Mr. Epstein”.