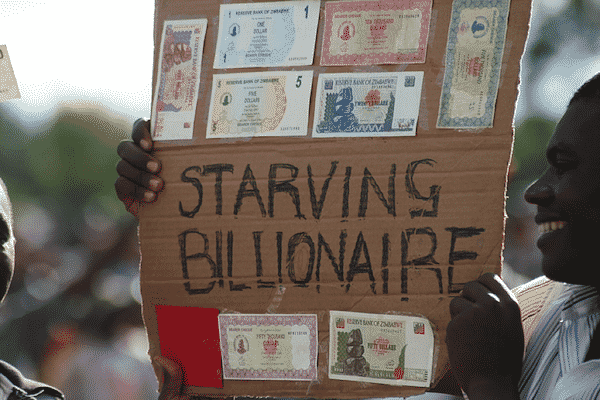 Here we have an image from 2008. It records a Zimbabwean, making a visual comment on the fact that, in a matter of months, his country experienced government-driven hyperinflation that left him broke.

In July of that year, inflation stood at 3500% per month. In order to cope with hyperinflation, the Zimbabwe government simply printed currency notes in ever-increasing denominations, the highest being one hundred trillion dollars.

Sounds like a lot of money. So why is the gentleman above referring to himself as starving? Well, in July 2008, the cost of a loaf of bread had risen to ten billion dollars. In actual fact, the bank notes displayed on the cardboard above fell well short of that amount.

Not surprisingly, the monetary system soon collapsed and by the following February, it needed to be re-started completely.

Tough break for Zimbabweans, but other than for compassion, why should we be concerned?

Because history has a propensity for repeating itself, and in countries whose governments make the same mistakes as Zimbabwe’s did, it will produce the same devastating results again. And in a country near you.

I wrote the above text in January 2014, then stopped. It occurred to me that the significance of it would be felt more greatly at a time when Venezuela had reached the same state as Zimbabwe in 2008.

I then wrote an essay for International Man entitled, “Watch the Movie,” which offered a prediction as to the future of Venezuela. At that time, inflation had just reached 50%, and although most of the world paid little attention, I suggested that if we were to follow the events there, over the next few years, we’d learn a great deal as to what was in store for the US, EU, Canada, and several other nations of the former Free World.

In 2014, Venezuela had begun a pattern that has been repeated countless times by other nations. Venezuela has now reached the point that Zimbabwe reached in 2008, and if we’d bothered to “watch the movie” of Venezuela over the intervening years, it would have enabled us to see the future in the US and elsewhere.

As I stated in that essay, it’s quite a simple process:

And so, based upon history, predicting Venezuela’s present condition was not terribly difficult to do back in 2014, and the projections made in that essay have come to pass.

But where does that leave us with the US, EU, Canada, etc.? What do these countries have in common with Zimbabwe, Venezuela, or for that matter, any of the other twenty or so countries that experienced economic collapse through hyperinflation in the last century?

Well, after World War II, the world experienced a reset. The nations of the world reshuffled themselves and a new order of prominence was created. A new paradigm, led by the US, emerged. The US was to be the economic top-doggie and those who got on board with the US programme would be able to enjoy the ride.

Since then, where the US led, others followed. Unfortunately, beginning in the 1970s, the US began to throw out the rule book and create the beginnings of the pattern that has, for thousands of years, led countries to economic ruin.

The dollar was taken off the gold standard, the government began an ever-increasing programme of borrowing, and the welfare/warfare programmes began to expand.

Other countries, most notably Europe, followed suit. The more a given country was tied to the US, the more it imitated the leader.

And it was possible to keep the party going for quite a long while, but, like all parties, an end is inevitable. Back in 2014, very few people I encountered believed that an economic crisis might be in their future, as conditions still appeared fairly rosy. Surely, the US would not go the way of so many other countries that were destroyed by debt, welfare, warfare, and collectivism.

But, today, we’ve been able to watch events play out in Venezuela, where the party is now clearly nearing its end. Many who attended are leaving, and little remains but the drunken rowdies who haven’t quite figured out that it’s over. Soon the neighbours will call the cops and a regime change will be implemented. The new leaders will then promise to return the country to sobriety.