Today a manned US reconnaissance plane entered Iranian airspace in a clear attempt to provoke Iran into shooting it down. Such an incident would have created an occasion for Trump to give the American people a special 4th of July fireworks.

On July 3 1988 the guided missile cruiser USS Vincennes shot down the civil Iranian Flight 655 with 290 people on board. The US claimed that the plane’s transponder was signaling an Iranian military identification code, that it was seemingly attacking the Vincennes, that the ship warned the plane 12 times, and that the ship was in international waters when the incident happened.

The crew of the Vincennes received medals for killing the Iranian civilians.

Investigations showed (pdf) that all the above claims were false. The shoot down was intentional. Iran sued the US in the International Court of Justice (ICJ) over it. The case was settled in 1996 when the US agreed to apologize and to pay $61.8 million to the families of the victims.

On June 20 a large US reconnaissance drone, accompanied by a manned US military airplane, flew into Iranian air space east of the Strait of Hormuz. Iran shot the drone down. The US threatened to strike Iran over the incident but Trump did not follow through.

There were reports that some people in the White House doubted that the US Central Command, the US military command for the Middle East, told it the full truth about the incident. Two days before the drone incident happened Secretary of State Mike Pompeo, the former CIA director, had unusual talkswith the US Central Command. This led to speculations that the incident was designed to provoke Iran into a shoot down and to push Trump into a war on Iran.

The case today is not in doubt. The US military definitely tried to provoke Iran into shooting down another one of its planes. 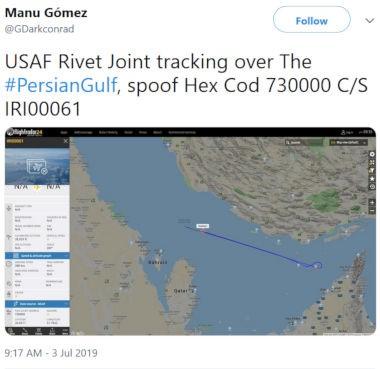 The US Airforce RC-135V Rivet Joint are signal intelligence planes that snoop on other countries. The plane flew over the islands Abu Musa and Sirri in the Persian Gulf which are Iranian territory and Iranian airspace. It falsely signaled that it was an Iranian plane.

The aviation transponder of the US spy plane was set to a code that is associated with Iran. The International Civil Aviation Organization (ICAO) defined (pdf) 24-bit addresses that identify the type of the plane and the country where a plane is registered . The 24 bit codes for Iranian registered airplanes begins with the country identifier 0111 0011, written in hexadecimal as 73. The flight radar page that Manu Gomez used displays these ‘S-Mode’ transponder codes the airplane sends as a six digit hexadecimal number.

This use of code that identified the plane as Iranian was not a mistake but absolutely intentional:

There are so many things wrong with what the #USAF is doing here, that are very much not evident to the casual observer.

1) The RC-135 has changed its unique transponder number to 730000 (hex), an Iranian assigned code. So, the USAF is impersonating an Iranian plane. https://t.co/4zx5kdV3ua