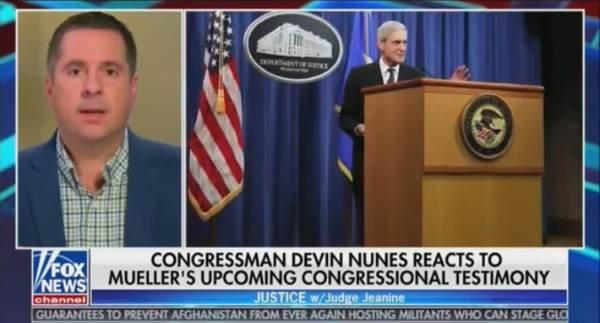 Rep. Devin Nunes (R-CA) told Judge Jeanine on Saturday night that there is something ‘odd’ about Mueller’s upcoming testimony to Congress.

Mueller is set to publicly testify to the House Judiciary Committee and House Intel Committee on July 17.

Nunes, a ranking member of the House Intelligence Committee warned that Mueller will only be testifying for a total of four hours to two separate panels so there won’t be enough time for everyone to question him.

“I don’t know which direction he’s [Mueller] going to go…one is he’s just not going to say anything, which is very possible, but it’s also very possible too that he could throw a monkey wrench in things,” Nunes said.

“What’s odd about this is, supposedly he’s only agreed to testify for four hours — but four hours with the House Intelligence Committee and the House Judiciary Committee is not enough time to get everyone’s questions in,” he said.

Mueller refuses to testify behind closed doors so he’s sending his “pit bull” Weissmann and his crooked team in to testify.

DiGenova warned that the real damage to President Trump will be done when Andrew Weissmann testifies in “executive session with unlimited questioning.”

“[Mueller’s} testimony is going to be basically worthless,” diGenova said on Friday to Lou Dobbs. “The real damage is going to be done the next day when they have testimony from Weissmann and his aides which will be done in executive session with unlimited questioning. That’s when the damage to the president is going to be done,” he said.

DiGenova called Mueller a “figurehead” and asserted that this has always been the Weissmann investigation and it will be “the Weissmann testimony,” he added.