by Brittany Vonow and Richard Wheatstone, The Sun: 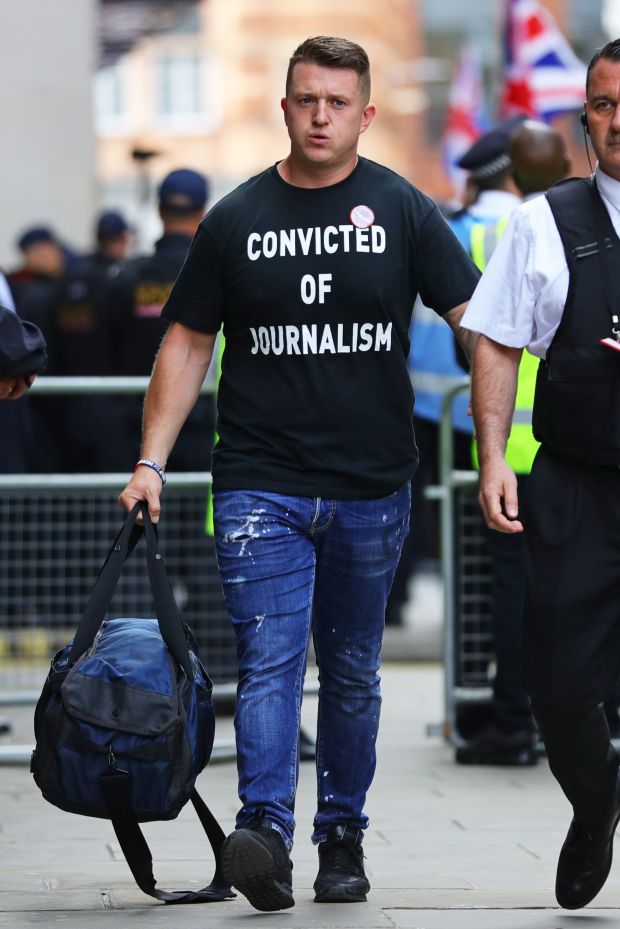 TOMMY Robinson has today been blasted by the judge after arriving ten minutes late to his contempt hearing as he faces two years in jail for live-streaming a video outside a child grooming court trial.

The EDL founder was this week found to have “encouraged mob rule” when he breached a reporting restriction over the case.

And Robinson, whose real name is Stephen Yaxley-Lennon, arrived late for his sentencing at the Old Bailey carrying a bag, while hundreds of supporters gathered outside the court and chanted “Free Tommy”.

In court, Robinson’s barrister apologised for his late arrival, with Dame Victoria Sharp telling him “it’s not a great start”.

The far-right figure today waved his fist and filmed himself as he arrived for his court appearance in a shirt reading “Convicted of Journalism”.

The back of his shirt read “Britain = North Korea” while he wore a badge with the slogan “I support soldiers A-Z”.

City of London Police closed down surrounding roads this morning ahead of the sentencing as crowds waved flags and placards.

Supporters, including women on mobility scooters, took turns making speeches outside court, speaking on megaphones as they claimed Tommy would “die in prison”.

Robinson had previously claimed in court he would be killed in revenge attacks if he was put behind bars.

Tensions have continued to escalate this morning with pictures showing one man being led away in an apparent arrest by cops. The majority of nearby businesses have closed off until at least this afternoon.

Several Robinson fans this morning lit flares in front of a big screen set up outside the court, with supporters then appearing to try to push police away.

Katie Hopkins was among those to support Robinson today, pictured hugging him before he walked inside.