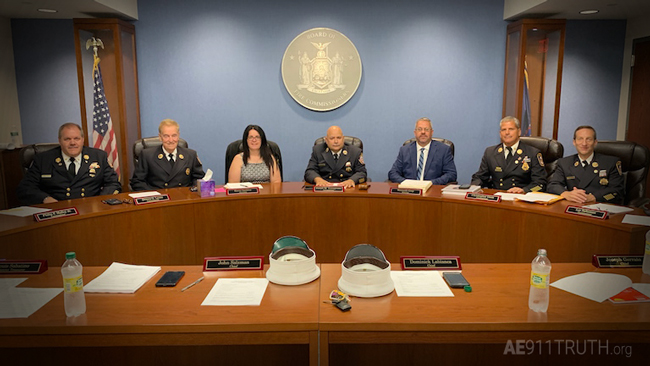 They started off by saying the Pledge of Allegiance. Ten minutes later, they were reading the text of a resolution claiming the existence of “overwhelming evidence” that “pre-planted explosives . . . caused the destruction of the three World Trade Center buildings.”

And so it was, on July 24, 2019 — nearly 18 years after the horrific attacks that traumatized a nation and changed the world forever — the Franklin Square and Munson Fire District, which oversees a volunteer fire department serving a hamlet of 30,000 residents just outside of Queens, New York, became the first legislative body in the country to officially support a new investigation into the events of 9/11.

The resolution, drafted and introduced by Commissioner Christopher Gioia, was unanimously approved by the five commissioners. Members of the audience — including the families of fallen firefighters Thomas J. Hetzel and Robert Evans, both Franklin Square natives — joined in solemn but celebratory applause after the fifth “ay” was spoken.

Conversing with guests after the meeting, Commissioner Dennis Lyons remarked on the enormous and lasting toll that 9/11 has taken on the Franklin Square community. “We have a memorial — a piece of steel from the World Trade Center with 28 holes where the nuts and bolts used to go,” Lyons explained. “Every year on the 11th, we put a rose in each hole for the 24 Nassau County firefighters and four Franklin Square residents who died on 9/11.”

“We have a memorial — a piece of steel from the World Trade Center with 28 holes where the nuts and bolts used to go. Every year on the 11th, we put a rose in each hole for the 24 Nassau County firefighters and four Franklin Square residents who died on 9/11.”
— Commissioner Dennis Lyons

The impact of 9/11 on the community extends well beyond the victims and their grieving families. On September 12, 2001, the Franklin Square Fire Department was called in to assist with the massive rescue and recovery effort that was just getting underway. Countless members of the department, including Gioia and Commissioner Philip Malloy (then rank-and-file firefighters), spent weeks on the pile searching in vain for civilians and fellow responders who might still be alive. Today, Malloy is one of thousands suffering chronic health effects. 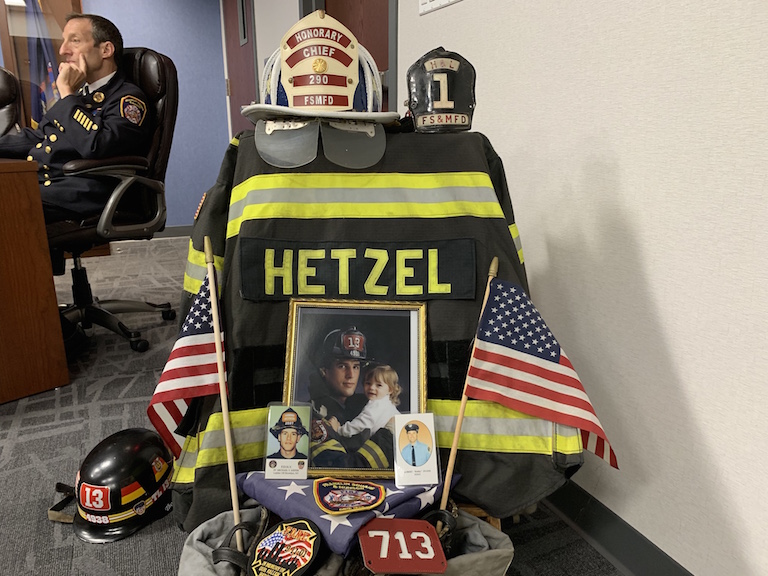 A memorial to Thomas J. Hetzel, a member of the New York Fire Department and Franklin Square and Munson Fire Department, who died on September 11, 2001.

The department also lost one of its own in Thomas J. Hetzel, affectionately referred to as “Tommy” by the commissioners. Hetzel was a full-time member of the New York Fire Department in addition to serving as a volunteer firefighter in Franklin Square. A touching memorial to Hetzel was on display during the meeting, and Hetzel’s widow, parents, and sister were all in attendance.

“The Hetzel and Evans families were very appreciative of the proceedings,” Gioia commented the day after the meeting. “They know it’s an uphill struggle. But at least they have hope, which is something they haven’t had in a long time.” 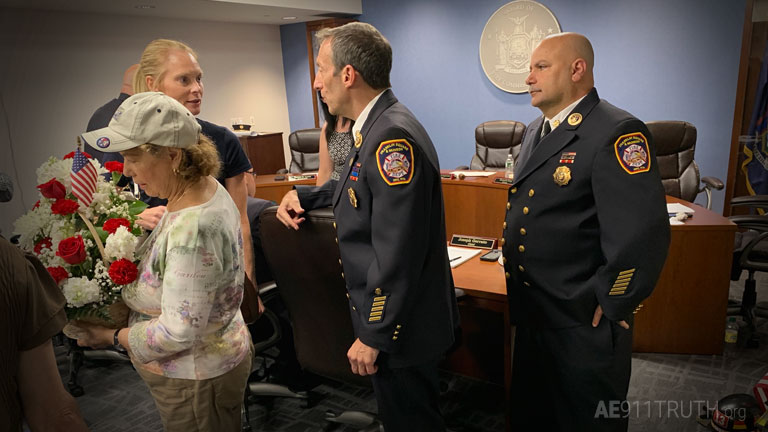 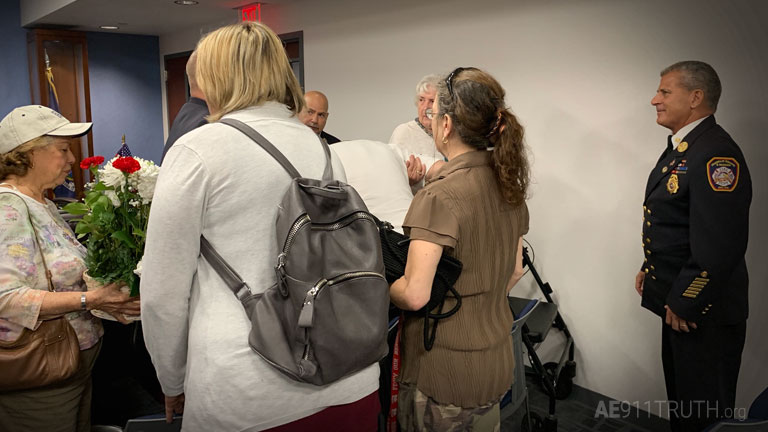 Besides the commissioners’ desire to see justice done for their fallen brothers and deceased neighbors, the driving force behind the resolution was a petition filed last year with United States Attorney for the Southern District of New York Geoffrey S. Berman by the Lawyers’ Committee for 9/11 Inquiry, outlining the evidence of the World Trade Center’s explosive demolition on 9/11.

The U.S. Attorney’s Office notified the Lawyers’ Committee in November that it would indeed comply with the federal statute requiring the U.S. Attorney to present the petition to a special grand jury. The news set off a wave of hope, among those paying attention, that the wheels of justice were finally beginning to move in the right direction.

Adding a surge to that wave of hope, the Franklin Square resolution declares the fire district’s full backing of the (presumably) ongoing grand jury investigation in Lower Manhattan, while also proclaiming the district’s support for “any and all efforts by other government entities to investigate and uncover the full truth surrounding the events of that horrible day.”

“We’re a tight-knit community and we never forget our fallen brothers and sisters. You better believe that when the entire fire service of New York State is on board, we will be an unstoppable force.”
— Commissioner Christopher Gioia

Speaking to those still present after the meeting, Gioia made it clear that this was the first step in a long process. Their goal now is to get every fire district in the state to go on record supporting a new 9/11 investigation.

“We’re a tight-knit community and we never forget our fallen brothers and sisters,” Gioia said. “You better believe that when the entire fire service of New York State is on board, we will be an unstoppable force.”

After a pause, Gioia added, “We were the first fire district to pass this resolution. We won’t be the last.”