West Michigan resident Audra Johnson, who went viral after wearing a wedding dress with “Make America Great Again” embroidered upon it, has been receiving vicious threats from liberals in the days since her July 4 wedding.

“I can’t believe the hypocrisy coming out of the left,” Johnson told Big League Politics. “For being the party of tolerance, they sure are being intolerant.”

Johnson, a pro-life activist in the Michigan Republican Party who is the Kent County leader for the Michigan Heartbeat Coalition, has had her Facebook page attacked by liberal trolls who have posted demeaning, sexist, and hate-filled remarks incessantly since her wedding to military veteran Jeff Johnson.

WARNING: Some of these comments are graphic and contain profane language. Some of the comments posted by liberals can be seen above.

Even more disgustingly, liberals wished death upon Johnson’s son who is in the intensive care unit at the Helen Devos Children Hospital in Grand Rapids, MI with a brain bleed following an ATV accident on Friday.

“I posted about my son being in the ICU because of a bad accident he was in yesterday,” Johnson said. “There was nothing political about the post. Liberals immediately began celebrating his injuries. Some even going as far as to say they hoped he die.” Liberals want your children dead if you refuse to conform to their anti-American ideology.

Facebook has allowed all of these abusive posts to remain on her page as the trolls continue to post their unadulterated hate, while posts defending Johnson against the polls are getting flagged by the censors.

Johnson notes that her husband’s ethnicity is African-American while she is Filipino, making the hatred from the liberals regarding their biracial wedding particularly disgusting and hypocritical.

“I really feel like because we are such a mixed family — he’s African-American, I’m Filipino … we both thought it was really important to show people that that’s wrong,” she said. 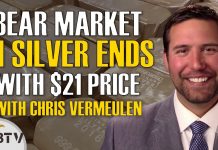 Chris Vermeulen – Silver Exits Bear Market Once It Goes Above $21