from Off Grid Survival: 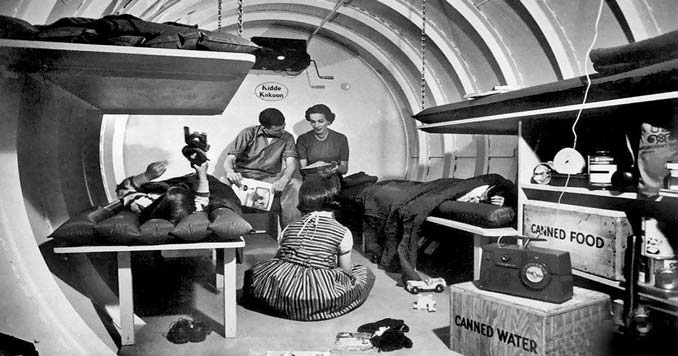 The persistent threat of the end of the world as we know it, popularly referred to as TEOTWAWKI, grows with each passing day. Whether it’s a global economic collapse, environmental disaster, a run on the borders, nuclear disaster or terrorism the threats have never been greater.

The only way to fully protect yourself and your family is to be prepared for anything and everything that could happen. You can’t hope that the authorities will swoop in and save the day. You can’t plan to ride out a disaster or the collapse of civilization in your house – not for long, anyway. You have to be ready, and that means you need to think about securing an impenetrable and defensible shelter. It’s time to think about underground bunkers.

Building an underground bunker at or near your house makes a lot of sense. There’s a high probability that your family will already be gathered at home when disaster strikes or soon thereafter. The family home should always be the home base and meeting place should an emergency situation arise. Having access to shelter near your house, be it below your house, in your backyard or on your property ensures that you can get to it easily and quickly when things fall apart.

An underground bunker is the most ideal location to ride out a natural disaster (aside from flooding, of course) or societal collapse. You can build it to meet your personal specifications, and since it will presumably be near your house, you can ensure that it’s always well-stocked. It’s also easy to keep hidden, as there won’t be many people who know what you’re building in our backyard. (For all they know it’s a pool and cabana)

As you start to make plans to build your underground bunker, it’s important to think about your needs. Here are some things to consider:

If you’re going to build an underground bunker, you need to be sure you’re thinking about all of the angles before you get started because once it’s built it will be difficult to change.

Building A Bunker: Reasons and Considerations

People who build underground bunkers build them for different reasons. Some people want a place to go if the government falls apart and there’s widespread panic and chaos. Other people want to be able to ride out a natural disaster. Underground bunkers can also protect from nuclear fallout. In all of these cases, the preparation and construction of the bunker is critically important and must be planned out in advance lest the bunker not serve its purpose.

Some of the basic considerations include how many people you need to protect and how long you need to stay in your bunker. If you’re planning on having a bunker that is a viable shelter for 90 days, then you need to have enough space for everyone in your party plus space to hold supplies for 90 days. It’s the space for the people inside, along with space for food storage, that will determine how big your shelter should be.

You need to think about having a water system and air filtration for your bunker. After all, you’ll be underground and won’t have doors open so the air must be filtered and you’ll need a way to access fresh water even if you have bottled water stored for drinking. You’ll need to think about sanitation, including a place to shower and a bathroom of some sort. Even if you have a camp toilet, you’ll need a way to dispose of waste.

The next level of considerations takes things one step further. What do you want protection from? Is this a nuclear fallout shelter, a storm shelter or even a panic room-type of bunker to keep people out? Obviously there are different kinds of building techniques that must be considered for each type of bunker, with a nuclear fallout shelter being at the top of the list because of all the added layers of protection needed to keep radiation from penetrating the bunker.

Prior to the build, you need to think about where your bunker is located and what kind of land you’re building in. If the soil is dry, like in a desert, you won’t have to worry about the water table and possible flooding, but if you’re in a place where rain and snow are plentiful then your bunker will have to withstand the elements so as to not flood, rot or become moldy if the soil is too damp.

Before we look at how to build your bunker, let’s talk about shipping containers as an easy and relatively inexpensive alternative to building a bunker from scratch.

The Problem with Shipping Containers

While doing research on building an underground bunker you might come across the idea of using a shipping container as the structure of your bunker. The idea is pretty straightforward – dig a massive hole, bury the container and then install all of the necessities. In theory, it’s a great idea, but there are some possible issues to be aware of.

Digging a massive hole isn’t a problem, and it’s easy enough to install the basic necessities no matter what kind of structure you’re using. But a shipping container has its own limitations.

There is only one way in and out, which could be a problem if you need to escape and your entrance is blocked.

Another issue comes with the weight of the dirt on top of the container. Over time the weight can cause the roof to sag or even collapse. If you’re in an area with a lot of rain the water could pool on top and cause the roof’s integrity to deteriorate even faster. Depending on your container’s placement you need to think about things like cars driving over it, or debris covering your entryway.

Speaking of rain, the exterior of shipping containers can be prone to rust so you need to think about the moisture level of the soil and how that could impact your container over time. Arid desert dirt would be better than the damp earth of a meadow or forest if you have some acreage. Erosion is a big problem, and so too are the chemicals in the container’s paint. Many of these containers are used to transport freight across the ocean, so the exteriors have been treated with chemicals. You don’t want the chemicals to seep into the interior of your container and make your bunker toxic.

In many cases shipping containers have made wonderful bunkers, both above ground and below ground. The problem is that they’re not designed to be buried and so some people have encountered problems, and the last thing you want is to need your bunker only to find that it’s not viable because the roof is collapsing. Shipping containers are risky in that regard, but they are really better suited for use above ground.

The first step of building your bunker is to determine the size you need, and then you need to choose a location. Many people build their bunkers themselves but if you are going big then hiring a contractor could be the best route.

While many people would rather stay off the grid, you likely need to pull permits to build a backyard bunker, especially if you’re using a contractor. Even if you’re building deep in the woods, it’s a good idea to do things the right way, so people don’t get the wrong idea. (After all, how many horror movies include the guy with the torture den buried deep in the woods?) If you find you need to pull permits and you don’t want to, consider reinforcing your house’s basement and making it a secret quasi-underground bunker. It’s the best way to stay off the grid and keep attention at a minimum.

There are lots of videos and resources available to help you build your underground bunker on your own. This guy has a pretty entertaining series of videos:

A hole must be made that’s big enough and deep enough for the planned structure. You need to pour a foundation out of cement, and then you start building your structure. Cement, bricks or blocks make the cheapest and sturdiest materials. Metal sheeting, though expensive, is the most ideal because it will last longest with the least amount of complication. Wood is not advised because any moisture in the ground will cause it to deteriorate.