Where is the Fed’s “U-Turn” that Wall Street promised us?

In June, the Fed shed Treasury securities at the slower pace announced in its new plan for QT, but it dumped Mortgage Backed Securities (MBS) at the fastest rate since the QE unwind started, breaching its “up to” cap for the first time. And it is experimenting with the opposite of its QE-era “Operation Twist” – Operation Untwist?

Total assets at the Fed fell by $34 billion in June, as of the balance sheet for the week ended July 3, released Friday afternoon. This includes $15 billion in Treasury securities and a record $23 billion in MBS, for a total of $38 billion, less some other balance-sheet activities unrelated to the QE unwind. This trimmed its total assets to $3.813 trillion, the lowest since September 2013. Since the beginning of the “balance sheet normalization” era, the Fed has shed $648 billion. Since peak-QE in January 2015, it has shed $687 billion: 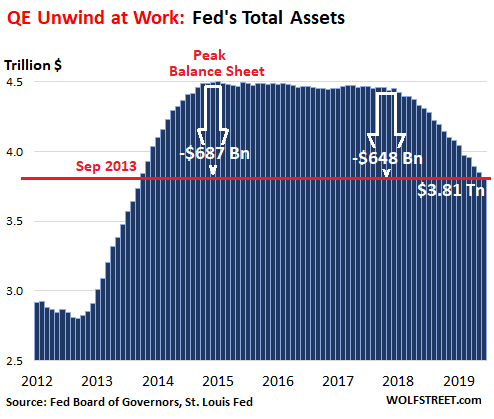 The Fed doesn’t sell its Treasury holdings outright. But when securities mature, the US Treasury Department pays them off, and the Fed then doesn’t reinvest this money in new securities. Instead, it destroys this money in the reverse manner in which it created it during QE. But the Fed has announced caps — the “up to” amounts. If the amount of Treasuries that mature in a given month exceed the cap, the Fed reinvests the overage in new Treasuries. Under the Fed’s new regime, the maximum amount of Treasury securities allowed to roll off when they mature was $15 billion in June. And that’s what happened.

In June, three issues matured, for a total of about $21 billion. The Treasury Department redeemed them and paid the Fed for them. The Fed reinvested $6 billion of this money into new Treasury securities but allowed $15 billion to roll off without replacement. So the balance of Treasuries dropped by $15 billion, to $2.095 trillion, the lowest since September 2013: 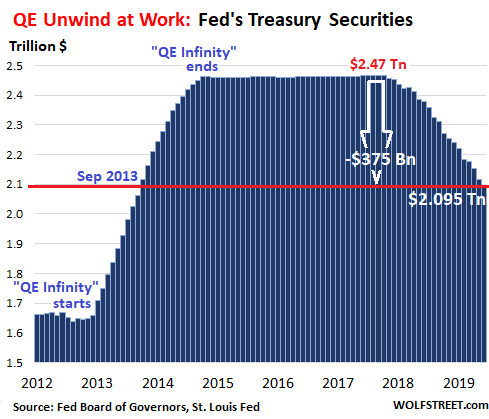 Over the past couple of months, the Fed began replacing longer-term Treasury notes with short-term Treasury bills. It’s the reverse of “Operation Twist,” which had been part of QE, layered between QE-2 and QE-3. During Operation Twist, it had replaced its short-term T-Bills with longer-term T-Notes and T-Bonds in order to force down the recalcitrantly high long-term yields.

Now it is starting to do the opposite, albeit in only small amounts. Short-term bills cropped up for the first time on its May-dated weekly balance sheets. In the current balance sheet, it lists $5 million, with the first batch maturing on July 9, the second batch in August. The Fed seems to be testing what it said would be implemented after September: Replacing long maturities with short-term bills to bring down the average maturity of its portfolio.

MBS securities differ from regular bonds: Holders receive pass-through principal payments as the underlying mortgages are either paid down through monthly mortgage payments or are paid off when the home is sold or the mortgage is refinanced. Any remaining principal is paid off at maturity.

About 95% of the residential MBS on the Fed’s balance sheet – they’re issued and guaranteed by Fannie Mae, Freddie Mac, and Ginnie Mae – mature in over 10 years. So the current runoff is almost exclusively due to pass-through principal payments.

These pass-through principal payments vary with movements in mortgage interest rates: Falling mortgage rates induce homeowners to refinance their mortgages, which means that their old mortgages are paid off, and the principal is passed through to the holders of MBS.

In June, the balance of MBS fell by $23 billion to $1.533 trillion. This was not only the biggest run-off since the QE unwind started but it also exceeded the $20 billion cap – another first! In May, the run-off had hit the cap of $20 billion for the first time, but didn’t exceed it: