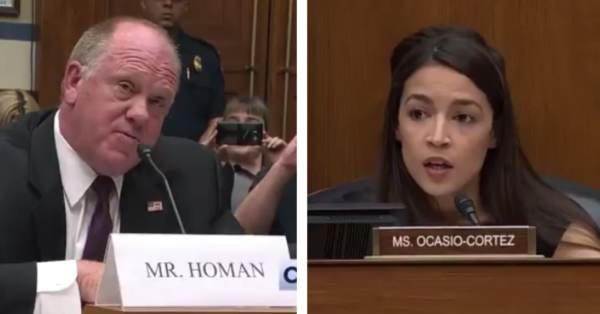 The Democrats held a hearing on Friday to blame US Border Patrol and President Trump for the absolute chaos on the southern border.

Democrat lawmakers want illegal aliens released from custody so they can run wild in the streets and live off the largess of the American taxpayer.

AOC thinks she can just read from a script and get by.

Tom Homan taught her a lesson.

“Zero tolerance was interpreted as the policy that separated the children from their parents,” AOC repeatedly parroted.

Homan shot back, “If I get arrested for a DUI and I have a young child in the car, I’m going to be separated.”

AOC made the claim that asylum seekers are not committing a crime.

“When you’re in the country illegally it’s violation of 8 US code 1325,” Homan said adding the Attorney General has made it very clear these asylum seekers are breaking the law.

AOC backed down and didn’t know how to respond.

Watch what happens when a 29-year-old bartender reads from a script and gets schooled by an educated official with a vast amount of experience in law enforcement and immigration: