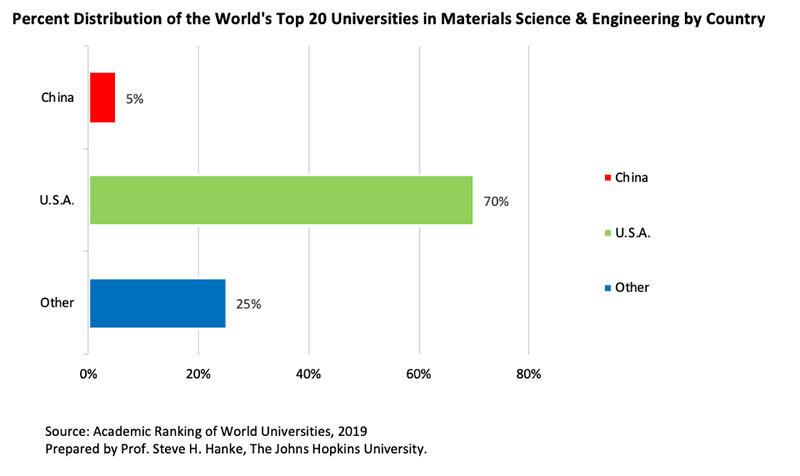 President Trump has picked a fight with China on trade. This has run the gamut of badgering to the imposition of tariffs on Chinese exports to the United States. And, if that is not enough, the President threatens to lay on more tariffs if China fails to comply with a host of U.S. demands. China will not stand idly by and be beaten with a stick, but will they pull the trigger?

One weapon that China has in its arsenal is rare earths. As the Global Times, a state-owned Chinese newspaper, put it: rare earths are “an ace in China’s hand.” Rare earths cover 17 important elements on the periodic table. And, they are elements in which China occupies a dominant position. Furthermore, the Chinese leadership is well aware of the strategic importance of rare earths. As far back as 1992, Deng Xiaoping stressed that “the Middle East has oil; China has rare earths.”

And that is not all. China knows that rare earths can be used to counterpunch. Last month, China’s Natural Development and Reform Commission, a body that oversees Chinese policy shifts, pointedly brought up rare earths in a question-and-answer bulletin on the threat of a rare earths export ban. The notice read: “Will rare earths become China’s counter-weapon against the US’s unwarranted suppression? What I can tell you is that if anyone wants to use products made from rare earth to curb the development of China, then the people of the revolutionary soviet base and the whole Chinese people will not be happy.”

So, the threat of a Chinese export ban on rare earths is not idle. Indeed, China has used export bans before. In 2010, China cut its exports of rare earths after a Chinese trawler collided with two Japanese Coast Guard ships in the East China Sea. Subsequently, the World Trade Organization ruled against these Chinese restrictions.

To punctuate the importance and potential potency of the rare earths weapon, President Xi Jinping recently visited a rare earths mining site. He also visited a plant that produces precision magnets which rely on rare earths.

Just what are rare earths used for and why are they important? Rare earths are found in a wide range of consumer products from iPhones to DVD players and rechargeable batteries. They are also critical for many “green” products, like LED lights. Prominent products also contain specialized magnets that require rare earths, and China produces 90% of those magnets. Motors in electric cars and the generators in wind turbines all use loads of precision magnets. Magnets that use rare earths are also employed in missile guidance systems. Other military equipment, like night vision devices and jet engines use rare earths. 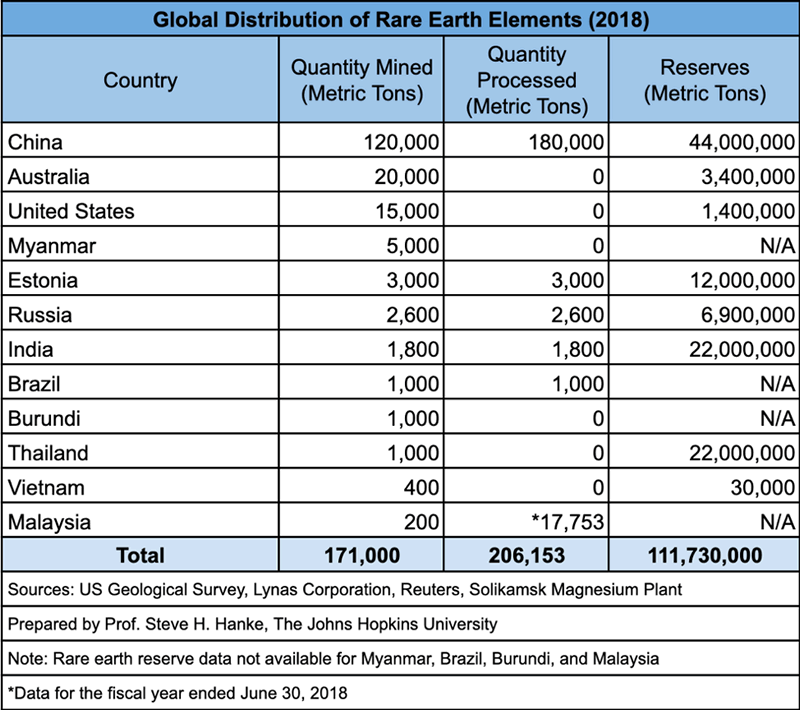 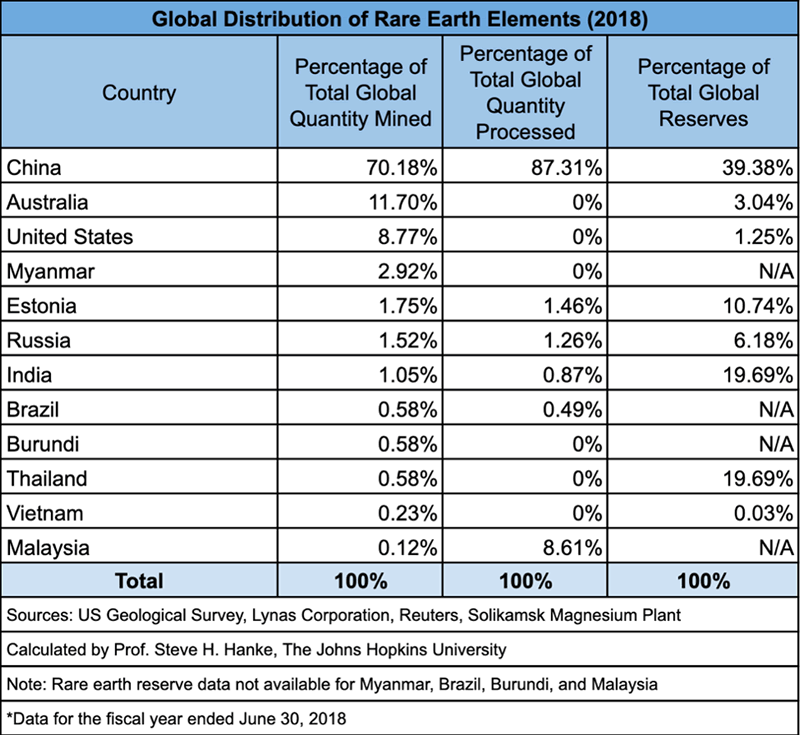 How did China gain such a dominance across the board in rare earths? As someone who landed his first faculty position and cut his eye teeth on mineral economics in the late 1960s at the Colorado School of Mines (the top-ranked University in the World in Mineral Engineering), I suspected that China must have invested heavily in the 3Ms: Mining and Mineral Engineering, Metallurgical Engineering, and Materials Science and Engineering.

So, let’s take a look. The chart below shows that, when it comes to the world’s top-flight universities, China is nowhere to be found in the Top-20. 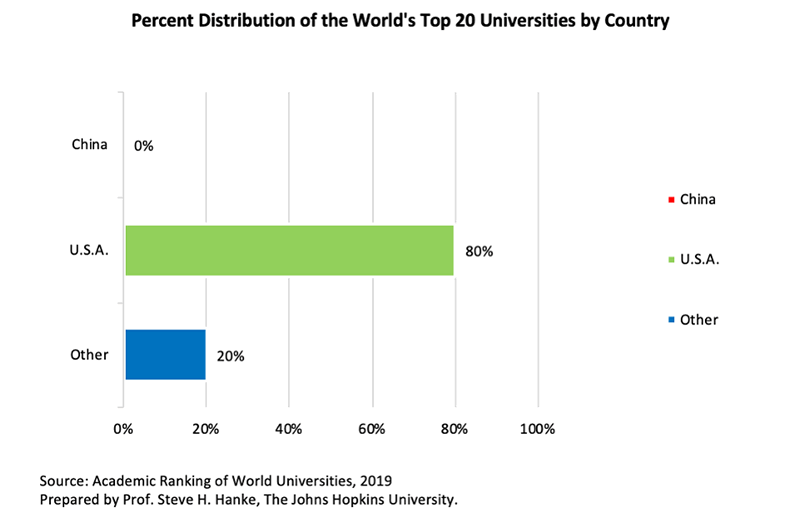 But, when we move into the 3Ms, things change dramatically. China dominates in Mining and Mineral Engineering, with nearly half of the world’s Top-20 programs in those fields. 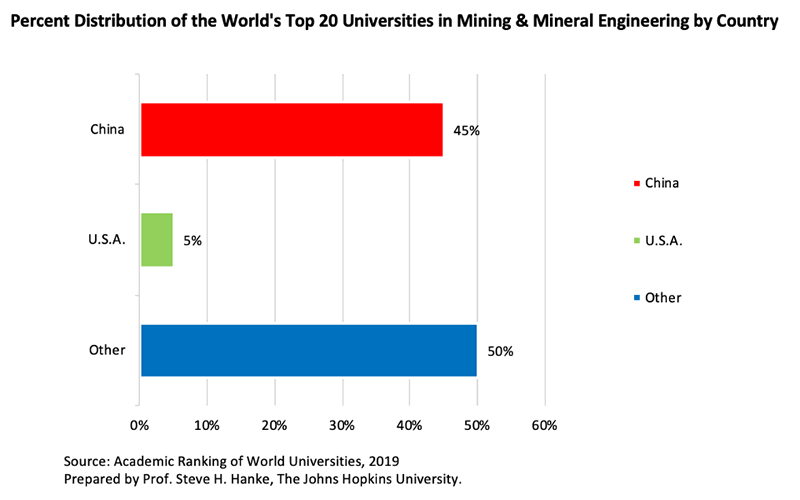 When we move to Metallurgical Engineering, China holds down 35% of the Top-20 programs in the world. 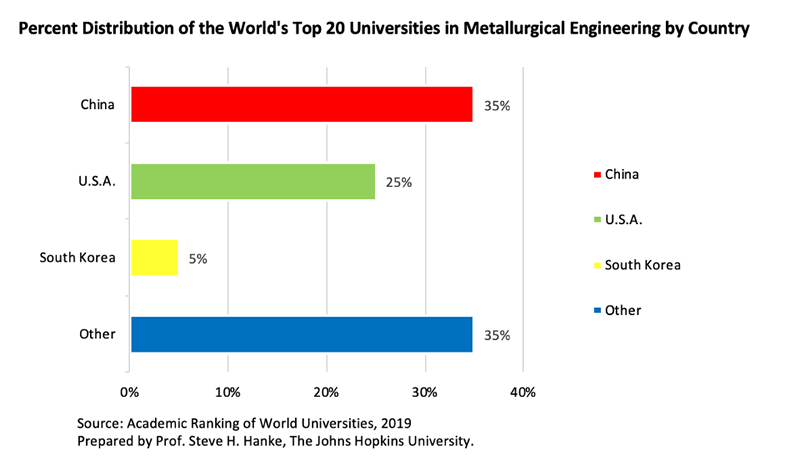 In Materials Science and Engineering, China slips, but still holds down 5% of the world’s first-class programs.

Just how has China reached the commanding heights in the 3Ms educational fields? The answer to this question is hard to nail down with precision. We have Deng Xiaoping’s quip about rare earths in 1992. So, we know that the Chinese leadership was aware of the importance of the 3Ms. But, it wasn’t until 2001 that I was able to turn up specific evidence of the Chinese government pouring money into education and development of the 3Ms.

In 2001, China launched its 10th Five-Year Plan for National Economic and Social Development. It was signed by none other than Zhu Rongji. According to the plan, China aims to make good use of its abundant mineral resources and enhance traditional industries (such as energy, metallurgy, chemical, machinery, automobile, building materials, construction, textile and light industries) with high, new, and advanced technologies. The measures include improving product variety and quality as well as speeding up development of universal, key, and accessory technologies. These objectives are to be supported by university investments in the relevant fields.