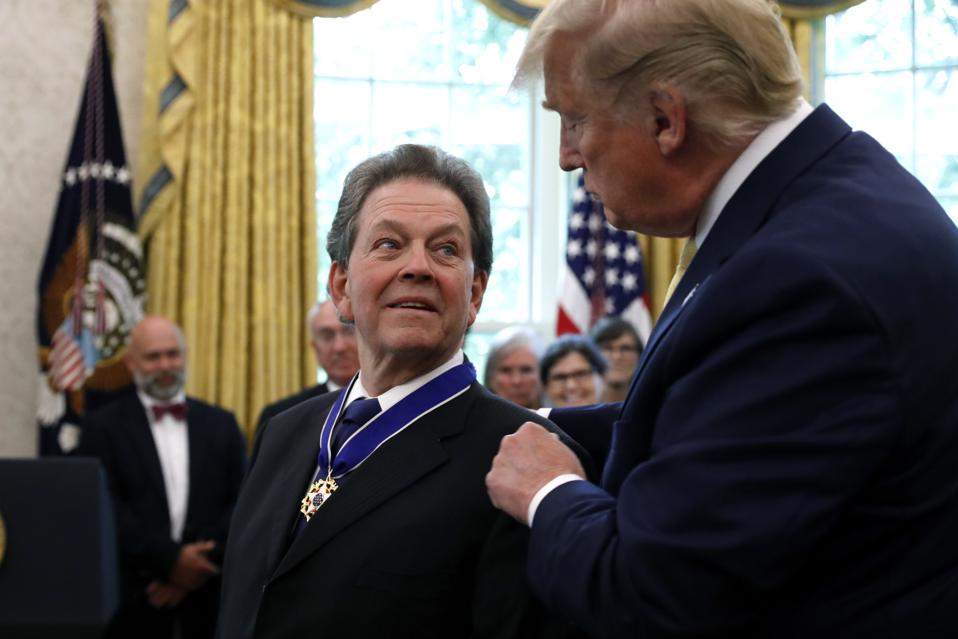 Art Laffer, the supply-side guru and recent recipient of the Presidential Medal of Freedom has caused yet another stir among the chattering classes. Last week, he told John Catsimatidis on AM 970 New York that “The Fed shouldn’t be independent of the administration. Never should be. None of those people were elected. They were appointed.” He repeated those sentiments on CNBC’s “Squawk Box” this morning.

What would my good friend Milton Friedman say? Well, unfortunately, we don’t know for certain because Milton is no longer with us. That said, Nobelist Friedman weighed in on the issue of central bank independence on several occasions. Indeed, an essay he penned in 1962 was titled “Should there be an Independent Monetary Authority?” His essay appeared in In Search of a Monetary Constitution, which was published by Harvard University Press and was edited by my collaborator, the late Leland B. Yeager. Friedman was unambiguous. He concluded that “The case against a fully independent central bank is strong indeed.”

Milton Friedman’s position on this issue was quite clear at the time. There is little doubt that, as a matter of principle, Friedman and Laffer would be on the same side of the street with regard to the Fed’s independence.

But, from a practical point of view, the most relevant question is what would Senator Rand Paul say? Paul introduced a bill back in 2015 which is popularly known as “Audit the Fed” (ATF). He reintroduced it in January 2019. His bill is formally called “The Federal Reserve Transparency Act (S. 148).

Although the Fed is already extensively audited, Paul thinks that the audits are lacking—even in a narrow accounting sense. As Paul told Grey Robb of MarketWatch, his bill “would be a complete annual audit looking back at the previous year. Basically it would be an audit of all aspects of the Fed, including what they own. Probably one of the more startling things is the Fed will say that they are already audited, and that is kind of disingenuous, is the best way you can put it. The GAO auditor was before a House committee a few years ago, and they say, ‘Well, you’re the auditor and you perform the audit,’ and she said yes, and they said, ‘Well, what does the Fed own? They have $4.5 trillion of assets — what are these assets?’ and they said, ‘Oh, we don’t audit that.’ It is like, what do you audit, how much coffee they purchased, what their salaries are, their expenses? It is kind of ridiculous and really unfair to say they are audited, when an audit would be what are your activities, what do you buy and sell, and what are they really worth? Because I think for the confidence of the nation, we would want to know what their assets are worth, are they marked-to-market, who did they buy them from, what did they pay for them. And we’ve had an audit before. We had an audit after the crisis in 2008, and we learned some startling things, but the world didn’t end.

It would be a complete audit of everything they do — including what they purchase, what they buy, what they sell. And I think that is not unreasonable to ask. And, really, the only constituency in the country opposed to it is the Federal Reserve. But, they are the ultimate of insiders, and they have a great deal of influence in Washington, so every year they come and basically mislead Congress by saying, ‘Oh, we already have audit,’ which is not really true.”

But, it’s not just a real, complete financial audit that Rand Paul’s bill would generate. The ATF bill would expand the scope and scale of Fed auditing. Indeed, monetary policy decisions, which have been exempt from any sort of “auditing” since 1978, would see their auditing exemption lifted if the bill becomes law.

And Paul is not alone. There is popular support for the idea that the Fed should be audited. About three-quarters of registered voters would give the general idea of auditing the Fed a green light. It’s no surprise, then, that there has been bipartisan support for similar proposals in the past. However, none of these have become law because the push-back from Fed officials and other “experts” has been strong. Today is no different, with the Fed and the experts all singing the same tune: “It’s Dangerous.”