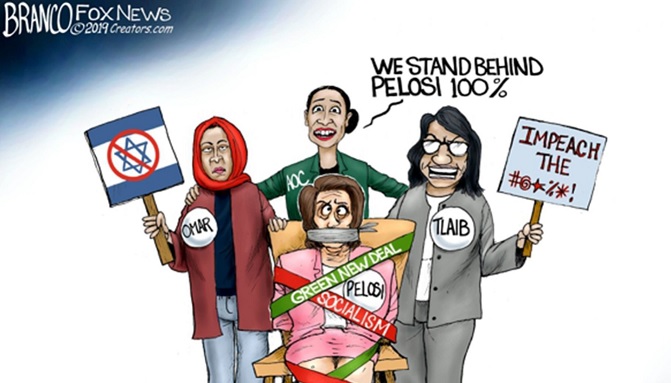 An internal war between House Democrats has been brewing and has now exploded in public, on social media. This all-out war has pit the “Squad” of newly elected freshmen socialist-leaning congresswomen, Rep. Alexandria Ocasio-Cortez (D-NY), Rep. Rashida Tlaib (D-MI), Rep. Ilhan Omar (D-MN), Rep. Ayanna Pressley (D-MA), against Speaker of the House Nancy Pelosi, along with the Congressional Black Caucus and other so-called “moderate” Democrats elected in red leaning states.

As will be detailed below, this battle is quite literally tearing the entire party apart and it isn’t occurring behind the scenes with anonymous sources describing events, but rather in full view of the American people.

While the public outbreak of the internal war and it’s dramatic escalation started in late June, the writing was on the wall and should have raised major red flags for Pelosi in November 2018, after the leader of the “Squad,” Alexandria Ocasio-Cortez, was elected, but before even being sworn in, stormed Pelosi’s office with other “climate change” protesters.

Following that, the Democrat socialist congress-kid from NY’s face was everywhere, with the DNC Chair calling her the “future of the party,” and the propaganda arm of the Dem party, the establishment media constantly covering for her never-ending gaffes, misstatements and outright lies, while Pelosi’s agenda generally went ignored.

The public display of internal strife began in late June, but Pelosi began to understand the consequences of allowing the Democrat party to be defined by the gang of four back in April and May 2019, when two separate sets of polling indicated that allowing them to become the face of the party was guaranteed to lose the House Majority for Democrats in 2020, and the Presidential election.

One survey showed that the radical positions taken by Ocasio-Cortez and her merry band anti-Semitic, race-baiting socialists, which is so popular among social media, was not at all popular with Democrat-leaning voters who don’t post political content online,  outnumbered the radicals roughly two-to-one.

The second poll was taken back in May, but the results of which has just been reported, on July 14, 2019, by Axios, and is being passed around by prominent and influential Democrats in America, showing Ocasio-Cortez “has become a definitional face for the party with a crucial group of swing voters, with 74 percent recognizing her but only 22 percent had a favorable view of her.

In other words the more known she becomes the more people express a dislike of her and her policies as among those Democrat-leaning voters only 18 percent had a favorable view of socialism, with 69 percent viewing socialism unfavorably.

Unfortunately for Pelosi, the Congressional Black Caucus, and the “moderate” Democrats elected in Republican-leaning districts, the Democrat presidential contenders started aligning themselves to some of the more extreme positions of the radical left, unlimited restrictions on abortion, including up to the moment of birth, the “Green New Deal,” free college for all, cancellation of student loan debt and “medicare for all.”

The point here is Pelosi lost total and complete control of the party agenda, which is now being defined by the radicals from within. 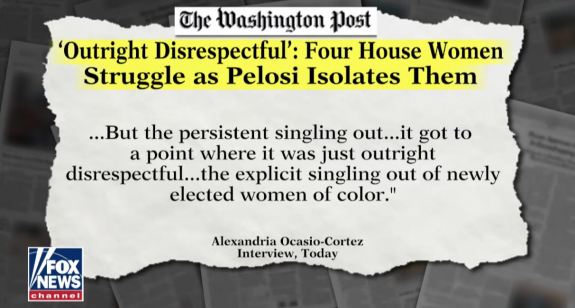 THE BREAKING POINT HAS BEEN REACHED

The “Squad,” all four having voted against both versions of the bill, had a massive, collective temper tantrum, but it was Ocasio-Cortez’s Chief of Staff, Saikat Chakrabarti, that got the ball rolling in a now-deleted tweet from June 27 that said “Instead of ‘fiscally conservative but socially liberal,” let’s call the New Democrats and Blue Dog Causcus the “New Southern Democrats. They certainly seem hell bent to do to black and brown people today what the old Southern Democrats did in the 40s.”

Throughout the end of June the battle continued to heat up with the radical socialist Democrats in the house increasing their attacks against the more moderate members (if there is such a thing anymore) and on July 6, 2019, Pelosi, understanding that to have those radicals as the “face” of the Democrat party would lose them control of House and a likely loss to Trump’s re-election campaign in the presidential race, pushed back against the public criticisms over the border funding bill in a NYT interview:

I asked Pelosi whether, after being the subject of so many you-go-girl memes for literally clapping back at Trump, it was jarring to get a bad headline like the one in HuffPost that day — “What The Hell Is Nancy Pelosi Doing?” The articledescribed the outrage of the Squad, as Alexandria Ocasio-Cortez of New York, Ilhan Omar of Minnesota, Rashida Tlaib of Michigan and Ayanna Pressley of Massachusetts are known.

Pelosi feels that the four made themselves irrelevant to the process by voting against “our bill,” as she put it, which she felt was the strongest one she could get. “All these people have their public whatever and their Twitter world,” she said. “But they didn’t have any following. They’re four people and that’s how many votes they got.”

Things went to hell fast for the Democrat party, as by July 11, Ocasio-Cortez told the Washington Post, “When these comments first started, I kind of thought that she was keeping the progressive flank at more of an arm’s distance in order to protect more moderate members, which I understood. But the persistent singling out … it got to a point where it was just outright disrespectful … the explicitsingling out of newly elected women of color.”

Many Pelosi allies took offense over the implication that Pelosi was being “racist,” rather than simply making a point that the “Squad” of four only had four votes, despite their overly loud social media presence and voice.

“What a weak argument, because you can’t get your way and because you’re getting pushback you resort to using the race card?” Clay said, according to The Hill. “Unbelievable. That’s unbelievable to me. I could care less. I could really care less. I agree with the Speaker. Four people, four votes out of 240 people, who cares.”

Further dividing the Democrat Party is the “Justice Democrats,” closely aligned with Ocasio-Cortez and her Chief of Staff Chakrabarti, who are endorsing progressive primary challengers against Clay and other centrist Democrats, in districts that lean-Republican, and targeting members of the Congressional Black Caucus, like Clay.

According to Reuters on July 10, Nancy Pelosi took everyone to task about publicly airing their conflicts and inter-party differences, when in a closed door meeting she told her caucus “You got a complaint? You come and talk to me about it. But do not tweet about our members and expect us to think that that is just OK.”

As was said above, Pelosi has lost control of her entire party, as everyone apparently decided to ignore her.

By July 12, the House Democrat official Twitter account, using the same terminology that Ocasio-Cortez used in her Wapo interview, highlighted another tweet by Chakrabarti from June 27th, when he was still ranting online over the border funding bill, and targeted a member of Congress that voted for the bill, and publicly took him to task, stating “Who is this guy and why is he explicitly singling out a Native American woman of color? Her name is Congresswoman Davids, not Sharice. She is a phenomenal new member who flipped a red seat blue.” They followed that up with “Keep Her Name Out Of Your Mouth.” 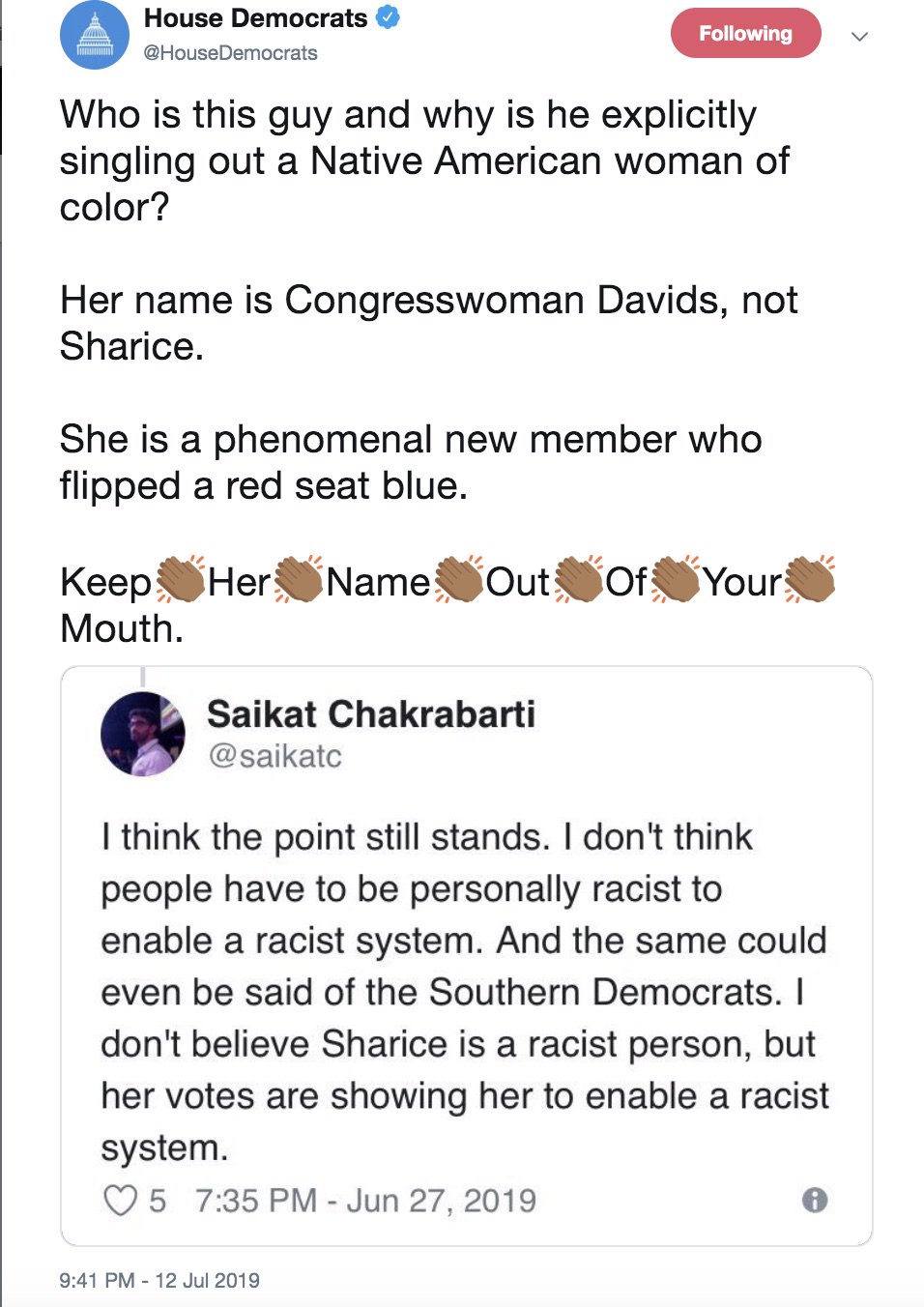 Apparently even Pelosi’s Deputy Chief of Staff, decided to ignore her warnings, because as New York Magazine/HuffPo contributor Yashar Ali highlights, he retweeted the House Democrats tweet to his own personal timeline.