Silver’s recent price performance has been disappointing. Normally, it is almost twice as volatile as gold, so when the gold price rises 11%, as it has since last December, you would expect silver to rise about 20%. Instead it has fallen marginally.

When we dig into the weekly Commitment of Traders’ Reports covering Comex futures, we see something very odd indeed. The largest four traders, normally bullion banks or major producers hedging future output, almost always run short positions against speculators’ longs. The more bullish speculators are, the more shorts are carried by the big four to accommodate them. Equally, they only go net long when the speculators are extremely bearish and are collectively marginally long or exceptionally net short. Not now, as the following chart of the Largest Four Traders net positions shows. 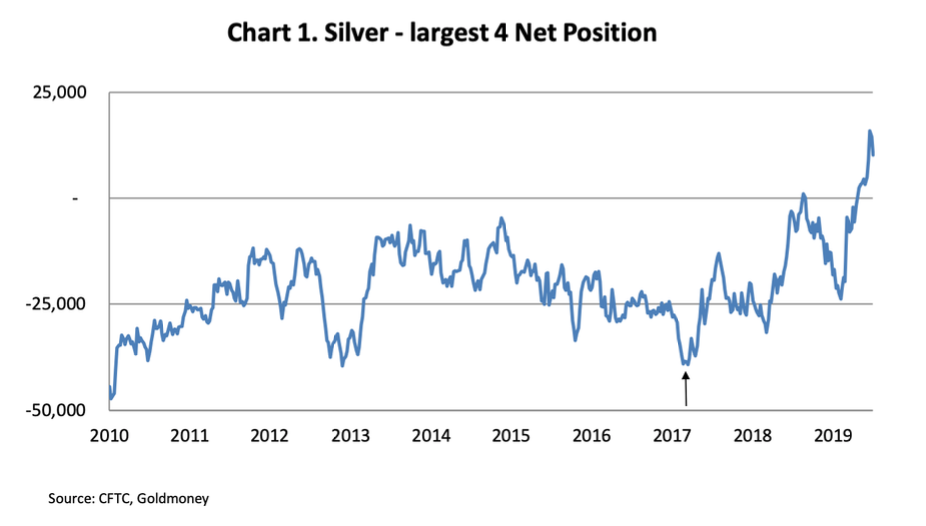 The number of contracts either net long or net short are derived from the concentration ratios in the weekly COT releases. The net long position is standing at a record high, a move that started in March 2017, marked by the arrow.

With respect to the concentration ratios, the CFTC’s explanatory notes state the following:

“The report shows the per cents of open interest held by the largest four and eight reportable traders, without regard to whether they are classified as commercial or non-commercial. The concentration ratios are shown with trader positions computed on a gross long and gross short basis and on a net long or net short basis. The “Net Position” ratios are computed after offsetting each trader’s equal long and short positions. A reportable trader with relatively large, balanced long and short positions in a single market, therefore, may be among the four and eight largest traders in both the gross long and gross short categories, but will probably not be included among the four and eight largest traders on a net basis.”[i]

So, anyone can be a large reportable trader. Gross positions include straddles and swaps between different silver futures, and do not concern us. It is the net position ratios that are relevant. Chart 1 above is of the four largest traders net positions in the markets calculated on this basis.

The next largest 4 traders can also be calculated by taking the concentration ratios of the eight largest and subtracting the four largest. It turns out, as one would expect when gold is very overbought, the silver positions of the next largest four at net short 40,305 contracts are close to a record short. The second four see prices have hardly moved, and the speculators in the Managed Money category are only moderately long. Despite their individual short positions, they don’t realise they are in acute danger of being victims of a major bear squeeze.

They appear to be blissfully unaware that they are as a group short to a very larger buyer in their own ranks. It is certainly possible no one has done the analysis covered in this article, because analysts and traders rarely look at the concentration figures. Furthermore, the correlation of the positions between the four largest and next four have not closely followed each other for some time as Chart 2 shows, which perhaps also encourages complacency. 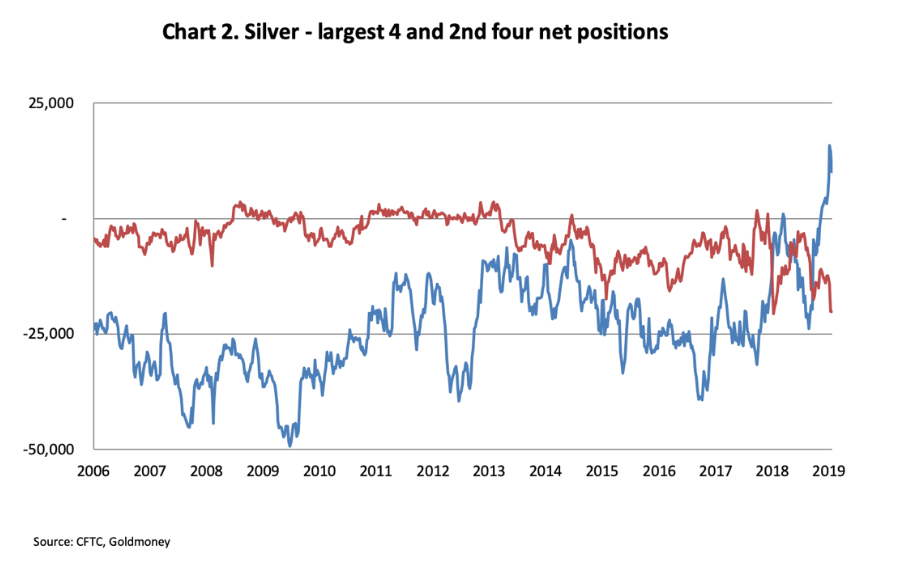 This is the first time this has happened. It seems unlikely that in normal circumstances any of the largest eight would be running a diametrically opposed trading position to the other seven. Comex doesn’t work like that, con­­­­sisting of distinct groupings: producers and merchants hedging their future deliveries, bullion banks acting as market-makers, and speculators, who take on the price risk by going long. They all tend to stick within their group motivations.

Given these normally clear distinctions we can probably rule out a collaboration between more than one large trader. If two or more large traders were involved, it would be known by insiders and the other large traders would not risk being short.

Therefore, it is likely to be only one long position, far larger than the charts above indicate, given the largest four traders will include three other large shorts. We can only guesstimate its size. However, if we assume that the other three largest trades are short in tune with the others, our long trader, our whale, is very long indeed. The long position probably began in March 2017, when collectively the large four were net short 39,215 contracts. This is marked by the up arrow in Chart 1, where the trend reversed. If we take that as our starting point, we can see that as of 2 July (the most recent COT figures) the swing is nearly 50,000 contracts. That is an indication of the long position of our large trader, accounting for over 20% of silver’s open interest. Since each contract is for 5,000 ounces, it represents as much as 7,775 tonnes, which is 28% of 2018’s global mine production of 27,550 tonnes.

In the context of the silver futures market it is huge. But it seems unlikely to be an attempt to corner the silver market, because Comex-registered vaults have about 9,500 tonnes of silver bullion and LBMA vaults at the end of March had 36,195 tonnes. In other words, there is 1.66 times annual mine supply in these two vaulting systems alone. Given healthy vaulting supply, someone attempting a repeat of the Bunker-Hunts’ attempt to corner the market in 1979 has a massive hill to climb, particularly when such an attempt might be thwarted by the regulators changing the rules.

Putting cornering the market aside, we can also rule out a large speculator taking a punt on silver. A look at the Managed Money category net position tells us our whale is not there. Nor does a whale this size show up in the Non-Reportable category either.

By a process of elimination, it looks like a commercial entity, which uses silver for manufacturing purposes and is a continuing buyer of the metal. It would make sense that such a buyer would wish to hedge against future price rises by going long of futures. This being the case, it is a behemoth, larger than any individual processor. And that leads to one conclusion: it is probably the Peoples’ Bank of China, the state institution charged with managing all China’s silver distribution. But with a purely circumstantial case, we need more evidence.

Why the trail of evidence leads to China

In 2012, I was speaking at a conference in New York at which a number of silver mining minnows had stands in the hope of attracting investors. I visited all of them to establish the answer to a simple question: how did they ship their silver out, who paid them, and when?

The reason for asking this question was there were allegations going the rounds about the dark deeds of JPMorgan manipulating the silver futures market. That the silver market was open to manipulation by the big banks there was little doubt, and JPMorgan was definitely a major force in the silver market. By not appearing to take credible allegations seriously, Comex and the CFTC as regulator gave the impression they were colluding with JPMorgan, giving the whole story an extra spin.

The assumption that JPMorgan could simply ride roughshod over the CFTC and Comex rulebook was really the weakness in the conspiracy theories. We are all aware of the crony capitalism between banks and regulators, but there are limits. Bending the interpretation of the rules is one thing. Flagrantly breaking them to create false markets is another.