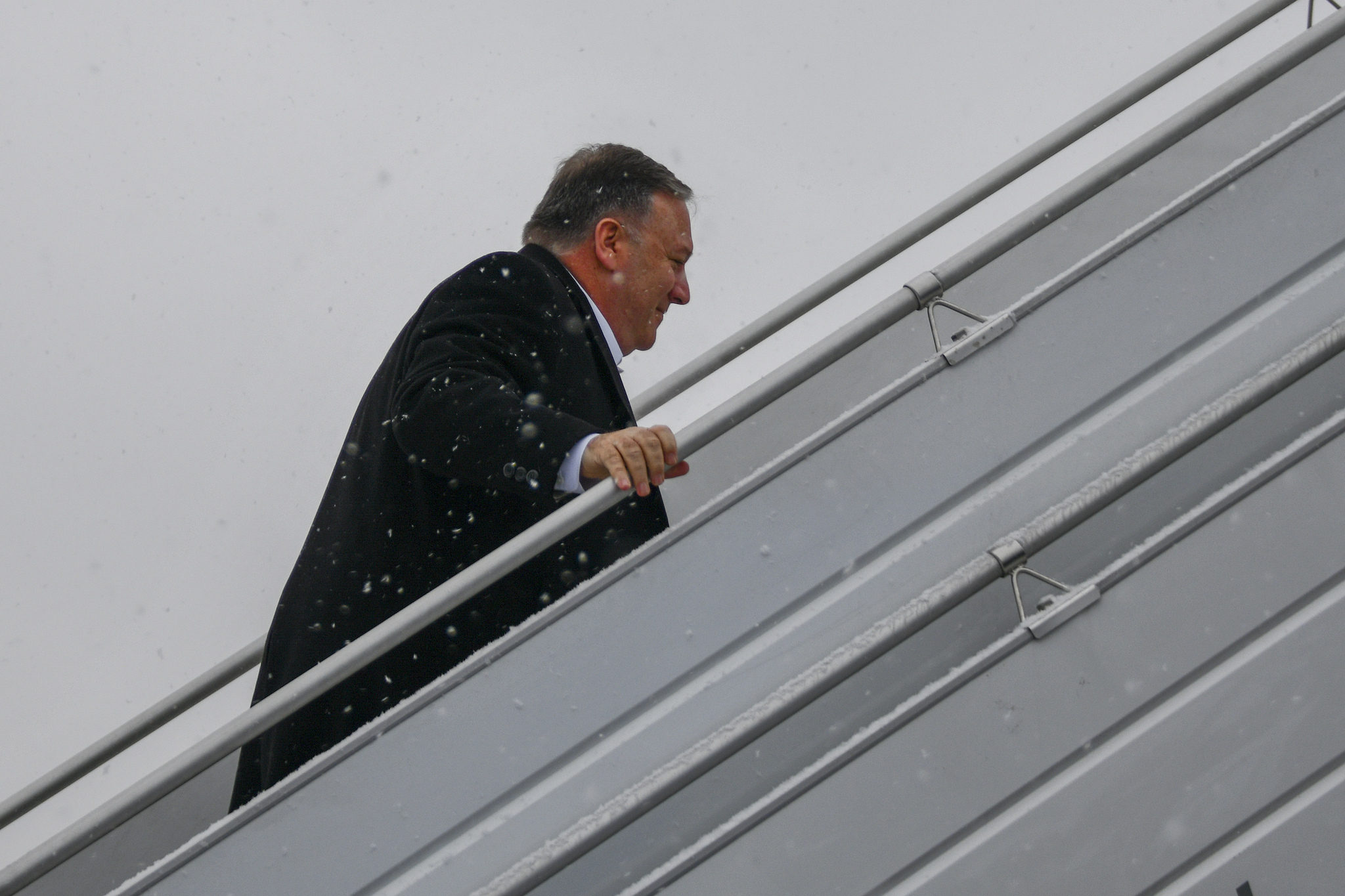 UPDATED: VIPS says its direct experience with Mike Pompeo leaves them with strong doubt regarding his trustworthiness on issues of consequence to the President and the nation.

MEMORANDUM FOR: The President.

SUBJECT: Is Pompeo’s Iran Agenda the Same As Yours?

After the close call yesterday when you called off the planned military strike on Iran, we remain concerned that you are about to be mousetrapped into war with Iran. You have said you do not want such a war (no sane person would), and our comments below are based on that premise. There are troubling signs that Secretary Pompeo is not likely to jettison his more warlike approach, More importantly, we know from personal experience with Pompeo’s dismissive attitude to instructions from you that his agenda can deviate from yours on issues of major consequence.

Pompeo’s behavior betrays a strong desire to resort to  military action — perhaps even without your approval — to Iranian provocations (real or imagined), with no discernible strategic goal other than to advance the interests of Israel, Saudi Arabia and the UAE. He is a neophyte compared to his anti-Iran partner John Bolton, whose dilettante approach to interpreting intelligence, strong advocacy of the misbegotten war on Iraq (and continued pride in his role in promoting it), and fierce pursuit of his own aggressive agenda are a matter of a decades-long record. You may not be fully aware of our experience with Pompeo, who has now taken the lead on Iran.

That experience leaves us with strong doubt regarding his trustworthiness on issues of consequence to you and the country, including the contentious issue of alleged Russian hacking into the DNC. The sketchy “evidence” behind that story has now crumbled, thanks to some unusual candor from the Department of Justice. We refer to the extraordinary revelation in a recent Department of Justice court filing that former FBI Director James Comey never required a final forensic report from the DNC-hired cybersecurity company, CrowdStrike.

Comey, of course, has admitted to the fact that, amid accusations from the late Sen. John McCain and others that the Russians had committed “an act of war,” the FBI did not follow best practices and insist on direct access to the DNC computers, preferring to rely on CrowdStrike reporting. What was not known until the DOJ revelation is that CrowdStrike never gave Comey a final report on its forensic findings regarding alleged “Russian hacking.” Mainstream media have suppressed this story so far; wereported it several days ago.

The point here is that Pompeo could have exposed the lies about Russian hacking of the DNC, had he done what you asked him to do almost two years ago when he was director of the CIA.

“You may wish to ask CIA Director Mike Pompeo what he knows about this.[“This” being the evidence-deprived allegation that “a shadowy entity with the moniker ‘Guccifer 2.0’ hacked the DNC on behalf of Russian intelligence and gave DNC emails to WikiLeaks.”] Our own lengthy intelligence community experience suggests that it is possible that neither former CIA Director John Brennan, nor the cyber-warriors who worked for him, have been completely candid with their new director regarding how this all went down.”

Three months later, Director Pompeo invited William Binney, one of VIPS’ two former NSA technical directors (and a co-author of our July 24, 2017 Memorandum), to CIA headquarters to discuss our findings. Pompeo began an hour-long meeting with Binney on October 24, 2017 by explaining the genesis of the unusual invitation: “You are here because the President told me that if I really wanted to know about Russian hacking I needed to talk to you.”

But Did Pompeo ‘Really Want to Know’?

Apparently not. Binney, a widely respected, plain-spoken scientist with more than three decades of experience at NSA, began by telling Pompeo that his (CIA) people were lying to him about Russian hacking and that he (Binney) could prove it. As we explained in our most recent Memorandum to you, Pompeo reacted with disbelief and — now get this — tried to put the burden on Binney to pursue the matter with the FBI and NSA.

As for Pompeo himself, there is no sign he followed up by pursuing Binney’s stark observation with anyone, including his own CIA cyber sleuths. Pompeo had been around intelligence long enough to realize the risks entailed in asking intrusive questions of intelligence officers—in this case, subordinates in the Directorate of Digital Innovation, which was created by CIA Director John Brennan in 2015. CIA malware and hacking tools are built by the Engineering Development Group, part of that relatively new Directorate. (It is a safe guess that offensive cybertool specialists from that Directorate were among those involved in the reported placing of “implants” or software code into the Russian grid, about whichThe New York Times claims you were not informed.)

If Pompeo failed to report back to you on the conversation you instructed him to have with Binney, you might ask him about it now (even though the flimsy evidence of Russia hacking the DNC has now evaporated, with Binney vindicated). There were two note-takers present at the October 24, 2017 meeting at CIA headquarters. There is also a good chance the session was also recorded. You might ask Pompeo about that.

The question is whose agenda Pompeo was pursuing — yours or his own. Binney had the impression Pompeo was simply going through the motions — and disingenuously, at that. If he “really wanted to know about Russian hacking,” he would have acquainted himself with the conclusions that VIPS, with Binney in the lead, had reached in mid-2017, and which apparently caught your eye.

Had he pursued the matter seriously with Binney, we might not have had to wait until the Justice Department itself put nails in the coffin of Russiagate, CrowdStrike, and Comey. In sum, Pompeo could have prevented two additional years of “everyone knows that the Russians hacked into the DNC.” Why did he not?

Pompeo is said to be a bright fellow — Bolton, too–with impeccable academic  credentials. The history of the past six decades, though, shows that an Ivy League pedigree can spell disaster in affairs of state. Think, for example, of President Lyndon Johnson’s national security adviser, former Harvard Dean McGeorge Bundy, for example, who sold the Tonkin Gulf Resolution to Congress to authorize the Vietnam war based on what he knew was a lie. Millions dead.

Bundy was to LBJ as John Bolton is to you, and it is a bit tiresome watching Bolton brandish his Yale senior ring at every podium. Think, too, of Princeton’s own Donald Rumsfeld concocting and pushing the fraud about Iraqi weapons of mass destruction to “justify” war on Iraq, assuring us all the while that “the absence of evidence is not evidence of absence.” Millions dead.

Rumsfeld’s dictum is anathema to William Binney, who has shown uncommon patience answering a thousand evidence-free “What if’s” over the past three years. Binney’s shtick? The principles of physics, applied mathematics, and the scientific method. He is widely recognized for his uncanny ability to use these to excellent advantage in separating the chaff from wheat. No Ivy pedigree wanted or needed.

Binney describes himself as a “country boy” from western Pennsylvania. He studied at Penn State and became a world renowned mathematician/cryptologist as well as a technical director at NSA. Binney’s accomplishments are featured in a documentary on YouTube, “A Good American.” You may wish to talk to him person-to-person.