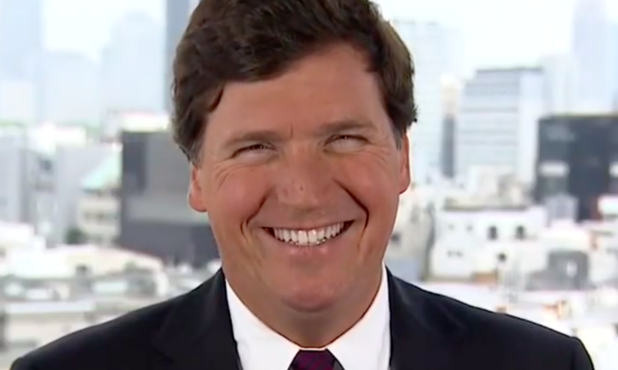 Tucker Carlson is going to get banned from TV over his opposition to the Iran war. He might be the only person who’s prevented it from happening. We know that the president watches the show. And last week, Tucker had on John Bolton’s former chief of staff, Fred Fleitz, and when Fleitz commented on reports that Trump had been calling Tucker, he didn’t deny it.

So apparently, Trump is calling him up and getting input from him. We all know that Tucker would tell him the same thing he says on his show – fire these insane warmongers he’s hired.

However, the Jews know that if Tucker wasn’t on Fox News, Trump wouldn’t be calling him. So they want him off. This is now messing with their plans, directly.

On Monday, Tucker interviewed Jim Antle, editor of The American Conservative, about an article he wrote about Donald Trump’s brave and heroic decision to not start a war with Iran.

JIM ANTLE: The incentive structure in Washington is totally biased around war. So when President Trump bombed Syria without congressional authorization – twice – we had pundits saying that that was the night Trump became president, that this showed he’s a real commander-in-chief, and all of these people who otherwise would say that Trump is this reckless and out of control chief executive are doing nothing to constrain him, nothing to restrain him … and that includes a lot of the Democrats. So you have people on the #nevertrump right and people in the Democratic Party who say that Trump is unfit to command and unfit to be president, yet they want him to oversee a major war with a country larger than Iraq, they’re disappointed he didn’t commence the attacks and they seem to think there’s no inconsistency to that.

Later on, a very interesting exchange takes place about this group of people we’re discussing:

TUCKER CARLSON: Very quickly Jim will you just confirm something for me: isn’t it the same people who are pushing us to war in the Middle East, who are also telling us we have to accept the populations of the countries in the Middle East coming to our country? How does that work?

JIM ANTLE: It’s a very strange concept, where we can’t enforce our own borders, but we can redraw the borders of every country in the Middle East, that we can create democracies in the Middle East and we’re sort of invading and inviting the world here at the same time. It’s definitely a little bit of a head scratcher, but it does make sense to people in Washington.

What’s going on with these people who are both pro-war and pro-immigration, I wonder?