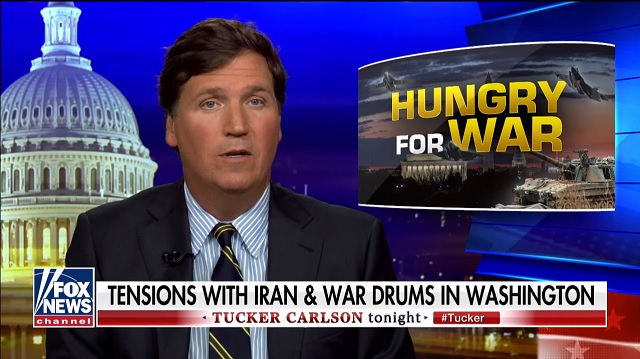 “They want a war, badly,” Tucker said. “Badly enough to lie about it. That’s why they’re putting troops into situations where conflict is inevitable, in order to start a war.”

“Everyone in Washington knows exactly what’s happening,” Tucker said. “They’ve seen it many times before.”

Tucker went on to interview Colonel Douglas Macgregor who said Trump “is surrounded by people… who are absolutely committed to finding ways to attack Iran.”

Col. Macgregor suggested Trump doesn’t want to go to war and tacitly appeared to warn Trump that getting into a hugely unpopular war without public support will ruin is presidency.

“I think the president’s figured this out, he’s got good instincts, but he needs to get rid of the warmongers,” Col. Macgregor said. “He needs to throw these genius that want limited strikes out of the Oval Office. The last thing the American First agenda needs is a stupid, pointless, unnecessary war with Iran — and he knows that, so he needs to act.”

On Wednesday, the Daily Beast reported that Tucker Carlson is privately speaking with President Trump and warning him against going to war with Iran.