The NASDAQ bubble that existed two decades ago contained a plethora of internet companies, such as Pets.com, that proved in the end to having a non-viable business model. Yet, because they enjoyed access to cheap credit, it allowed them to exist for a long time without generating positive cash flow. This, in turn, created artificial and temporary demand for all kinds of capital goods investments such as, fiber optic cable and routing equipment, which in turn served to provide a significant boost to economic growth. The consumption derived from equity prices that generated huge capital gains also proved to be a temporary and artificial support for GDP.

The same dynamic was true for the Real Estate bubble circa 2008. Subprime home buyers purchased multiple properties with no income, no job, and no assets behind their loans. This caused home prices to soar and propelled owners to extract a massive amount of equity from elevated property values that proved to be fictitious. This employed an army of lawyers, real estate brokers, and construction workers; and at the same time was a boon for the basic materials industry, home furnishing stores, etc.

According to the Center for Economic and Policy Research, residential construction spending alone boosted GDP by more than two percentage points during the height of the housing bubble. Of course, when you include all of the ancillary components surrounding the real estate boom—including consumption from home equity extraction—you can conclude that real GDP would have been closer to zero, rather than the 3.4% average through the peak years of the housing boom.

The same can be said for GDP during the NASDAQ mania of 2000. Instead of growing at the four-year average of 4.5% leading up to tech wreck, real GDP would have been closer to 2%, if not for the massive consumption boost from realized capital gains aloever mind the spending confidence attained from paper stock gains. Realized capital gains alone increased by $430 billion (270%) from 1995-2000.

What these two economic distortions had in common was a massive artificial boost to consumption that was a byproduct of those very same asset bubbles, which were in turn engendered by an era of humongous debt accumulation. Of course, each bubble was birthed by the Fed and a private banking system that made available too much cheap money.

It was hard for mainstream economists to separate at the time what was real demand and that which was ephemeral. This is because most could not, or would not, acknowledge that such bubbles existed until after they burst. Even the “maestro” Alan Greenspan and the “Courageous” Ben Bernanke have gone on record saying that bubbles can’t be identified until after they pop—even though central bankers are their chief engineers.

Today’s version of insolvent NASDAQ startups and defaulting Liar Loans can be found in the corporate bond market, which is the nucleus of the current gargantuan pile of zombified debt (zombie companies are those that need to issue new debt just to pay interest on existing obligations). Nearly one-quarter of the companies in the Russell 2000 have now found themselves in this precarious position—praying that junk bond yields don’t rise and that the economy never slows down. There is about $5.4 trillion worth of Leveraged Loans and corporate debt that is rated BBB or less. Compare that to the relatively minuscule amount of $1.5 trillion of subprime mortgage debt that eventually brought the entire global financial system to its knees.

Much like the prior two bubbles, companies have used a great portion of this new debt in a non-productive manner. That is, to buy back their own shares and pay special dividends, both of which have inflated stock prices to a record high as a percentage of the phony and fragile GDP.

Ironically, signaling investors have learned nothing from Pets.com, the recent IPO of another online pet supply company called Chewy ended its first day of trading with a valuation of nearly $15 billion, but posted a net loss of $267.9 million for the fiscal year ending February 2019.

Of course, if you cannot understand or acknowledge that a bubble exists you will not be able to recognize the ersatz nature of GDP. Hence, back in 1999 and 2007, we often heard about the healthy level of consumption and the robust consumer who was effusing confidence. A low unemployment rate, booming asset prices, robust earnings growth, and peak margins always mark the top of every economic cycle.

Therefore, debt and asset price ratios that have GDP as the denominator, as frightening as they look right now, will be much worse when the truth behind today’s fragile economy is exposed.  Two great examples of this are the levels of Corporate Debt and Total Market Cap of Equities as a percentage of GDP. 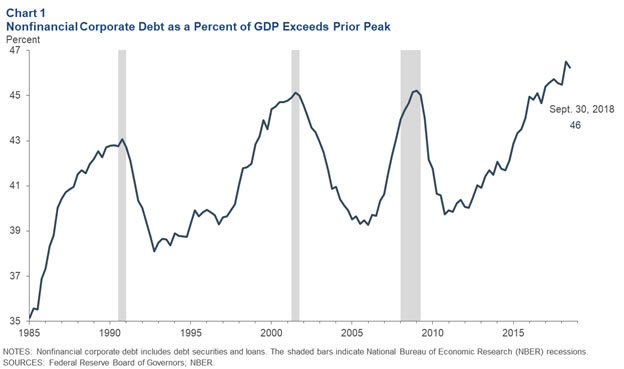 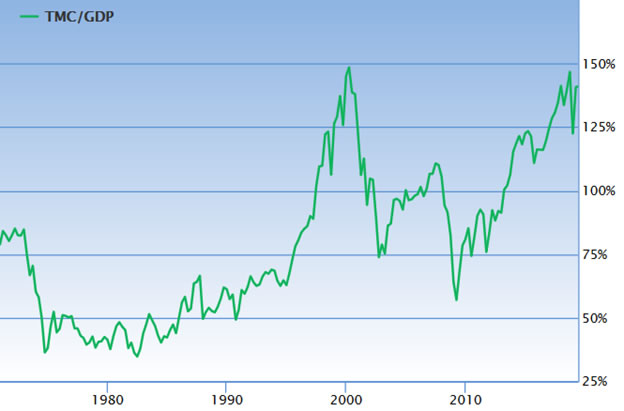 GDP is poised to contract, but all of that debt will remain.

What else do these bubbles have in common? They all stem from the same culprit: artificially-low interest rates that engendered yet more debt and pushed asset prices much higher than what the underlying economic activity could support.

The global economy is in the process of slowing down, and the current fixed income bubble is starting to crack. But this process is not primarily due to tariffs and the threat of escalating trade wars. They are merely exacerbating the underlying causes of waning growth.

The culprits behind faltering global GDP growth are: The record $250 trillion of debt the world is lugging around, which is a gigantic tax on future consumption with interest due. The inability of China, which has been responsible for 1/3 of global growth since 2008, to continue manipulating the global economy higher through further increases in unproductive debt issuance. And, the lagged effects of 9 rate hikes from the Fed, along with the unprecedented destruction of $600 billion of base money supply through its QT program.