For many years I have examined how wars of all types have been used by the money elite to distract the masses and maintain a certain level of influence over social and political systems. But war is not only a useful tool for keeping the status quo. Some wars, particularly world wars, are often catalyzed and exploited by those with a globalist agenda as a way to change the way civilizations function and think. The goal? To influence the masses to abandon their attachments to concepts like individualism, nationalism, free markets and sovereignty, and to embrace collectivism and total centralization.

That is to say, the ideals that globalists hate get blamed for the wars they help start, then they introduce their centralized systems as a “solution” to the problems they created. The trade war situation will be no different.

Whether or not you agree with the rationalizations behind the trade war, the point is, the only people who will ultimately benefit from it are those striving for globalization.

To institute centralization on a global scale, the elites need an all-encompassing crisis that can be blamed on nationalism, protectionism, and the free market dynamic. They need a threat that will affect and terrify billions of people into demanding intervention by international organizations such as the IMF and the BIS, as well as a rationale to introduce monetary umbrella actions such as the induction of the SDR (Special Drawing Rights) basket system as a replacement for the U.S. dollar as the world reserve currency. They need something very similar to a world war. In this case, however, it will be more economic than kinetic.

An economic world war has the distinct potential to cause all the elements of a collapse situation without the severe damage to vital infrastructure that inevitably comes with a shooting war. Because of the advantages the strategy provides for globalists, I predicted this exact outcome would develop out of the trade war in my article ‘World War III Will Be An Economic War’, published in April 2018. Here are the trade war developments so far that support this theory…

Collapse Of Trade Talks: Recent plans for high level trade talks between the U.S. and China have fallen apart (likely by design), and so far there are no announced plans to reengage negotiations. So, all the assumptions in investment circles the last few months that a trade deal would be quickly finalized and vault the Dow Jones to 30,000 points were obviously a result of wishful thinking in unicorn land.

Abrupt Spike In China Tariffs: The Trump Administration announcement of a sudden and swift increase in tariffs was not all that surprising to me, but it sure seemed to shock the mainstream economic world. Probably because of the endless talk since January of an imminent deal being brokered. The word on one side was that China would fold because they “can’t survive” without exports to U.S. markets. Of course, the U.S. only accounts for 18% of Chinese exports, which is a sizable piece of the pie, but hardly a crippling blow to China should the trade war continue for the long term.

The word on the other side was that Trump would fold because he had attached the success of his administration to the success of the stock market, and a prolonged trade war would invariably crash stocks. This is partially true…

Trump rightly insisted during his presidential campaign that the Federal Reserve had used quantitative easing (QE) measures to artificially inflate the stock market bubble for the past several years. Then, after entering the White House, he pulled a 180 and began Tweeting relentlessly about how stock market highs were due to his administration, not the Fed. Now, this might seem like insanity until you look at the elitists residing in Trump’s cabinet, and then everything starts to make sense.

China’s Retaliation: China has raised its tariffs on U.S. exports to 25% and has all but ended its purchases of U.S. agricultural goods, which is devastating profit margins for American farmers right after massive flooding in the Midwest had already hurt planting prospects. However, China has not yet released a full statement on how it intends to retaliate. Options on the table include banning exports of rare earth metals to the U.S., targeting U.S. companies like Google, Qualcomm or Apple with restrictions or bans of their operation in China altogether as the U.S. has done with Huawei, dump their extensive holdings of U.S. treasuries, or the most damaging tactic of all – drop the U.S. dollar as the world reserve currency for purchases of Chinese goods, a prospect I will examine shortly.

Surprise Tariff Threats On Mexico: Another surprise out of left field as Trump targeted Mexico with 5%, rising to 25% in the next few months if Mexico does not stem the flow of illegal immigrants into the U.S.  Such a move would erase the “North American Trade Deal” set to be finalized this month if the situation is not resolved.  While Trump has announced that a deal has been finalized, I remain highly skeptical.  As we witnessed with the China trade talks, any discussion of a “deal” being made should be taken with a grain of salt, and I predict tensions with Mexico will return in a matter of a few months.

Mexico is the largest U.S. trading partner under China and Canada, and the third biggest buyer of U.S. goods. A trade war with Mexico should be taken as seriously as the trade war with China.

Tariffs Against India: The U.S. is ending preferential trade status with India as part of the tariff salvo, which effectively places tariffs on over 3,000 different export items once considered duty free. India is now considering possible retaliatory measures, and has been edging towards closer economic ties with China for a few years. This move may push them all the way into China’s camp. As a side note, India and China together make up around one third of the world population.

Tariffs Against Australia: A key ally in the Pacific region, Australia was given exemption from tariffs on steel and aluminum exports to the US. However, the Trump Administration is considering removing that exemption which would mean 10% tariffs on Australia’s aluminum and 25% tariffs on its steel. Australia only makes up around 6% of the U.S. aluminum market, but the tariffs could be treated as an attack against a long time partner and opposed as a matter of principle.

Trump Offers UK A Deal If They Brexit: I predicted the outcome of the Brexit vote back in 2016based on a theory – that those who desired globalization were pulling back on real interference (as opposed to theatrical interference) and were allowing “populist movements” to gain an apparent foothold in the political arena. Why? So that they could then collapse the “Everything Bubble” the central banks had created on the heads of those same movements and blame them for the disaster.

I also predicted based on the same theory that the Brexit would eventually result in a “no deal” scenario, otherwise known as a hard Brexit, in which the UK would leave the EU without a finalized agreement on future trade. So far the theory is holding strong, with Trump in the UK recently seeking a U.S./UK trade deal if the UK walks away from the EU. This places the two biggest “populist” movements in the world in direct alliance, and should they both fall together economically, the history books will surely blame their trade protectionism and “overt” nationalism rather than the central banks that caused the financial instability in the first place. 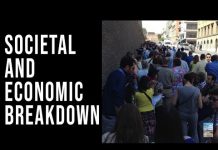 42% of Layoffs Permanent? Debt Growing and Cashing In Retirement Accounts!