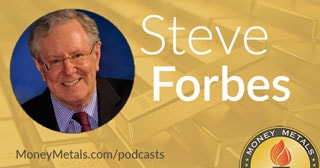 Coming up we have an incredible interview with business icon and two-time presidential candidate Steve Forbes, CEO of Forbes. Mr. Forbes unloads on the Fed and its horrific track record — with accuracy that’s worse than a bunch of monkeys throwing darts at a dart board he says. He discusses Donald Trump’s chances at reelection and lays out the case why you simply must have at least some gold in your portfolio. So be sure to stick around for a Money Metals exclusive interview with Steve Forbes, coming up after this week’s market update.

After selling off earlier this week, gold and silver markets are now moving back up near important levels for traders. Gold is once again testing $1,350 with silver hovers around the $15.00 an ounce level.

The big mover in metals markets this week: palladium. Prices for the automotive metal have surged $91 so far this week or 6.6% to now trade at $1,461 per ounce. Palladium is vastly outperforming platinum, which is flat for the week and currently comes in at $808 an ounce.

Bullish metals analysts say these markets stand to benefit from rising geopolitical risk and a more dovish monetary policy from the Federal Reserve.

On the geopolitical front, tensions with Iran escalated on Thursday after an oil tanker in the Gulf of Oman was hit with explosives. The U.S. State Department immediately blamed Iran for the attack. But U.S. foreign policy critics such as former Congressman Ron Paul suggested it could have been a false flag akin to a Gulf of Tonkin incident.

Regardless, Secretary of State Mike Pompeo and National Security Advisor John Bolton are clearly itching to go after Iran. Their regime change effort in Venezuela, in which the U.S. prematurely declared the country had a new president, appears to have failed. Nicolas Maduro remains in power while the Venezuelan people continue to suffer sanctions, socialism, and hyperinflation.

While inflation rates in the United States are tame by comparison, they could be heading higher in the months and years ahead as the Federal Reserve shifts toward easing. The Fed meets next week and could announce a rate cut then or perhaps hold off until later this summer. But its next move almost certainly will be a cut.

On Wednesday, the Bureau of Labor Statistics reported that the Consumer Price Index is running at 1.8% over the past 12 months. Expected increases in food costs from this spring’s flooding have yet to be fully reflected in the CPI. But with the CPI running slightly below the Fed’s 2% inflation target, monetary planners may have the impetus to lower their benchmark interest rate next week. We’ll have to wait and see.

Over the past few years, the Fed has been arguably successful at keeping the stock market elevated while holding the CPI down. But investors who expect perpetually rising asset markets combined with permanently low inflation should understand that nothing lasts forever. Not bull markets. Not stable prices. Not even fiat currencies themselves.

One successful investor who is bracing for a lot of financial turmoil ahead is Robert Kiyosaki. He made millions in real estate and became famous for his bestselling “Rich Dad” series of books. A few years ago, he also put out a book on becoming rich with none other than Donald J. Trump as his co-author.

That was before Trump became President, of course. Now that he’s an incumbent politician gearing up to campaign for re-election, Trump is singing a far different tune about the economy than his friend Robert Kiyosaki.

While Trump touts the supposed strength of the U.S. economy and stock market, Kiyosaki said in a recent interview with World Alternative Media that it’s fake.

Kiyosaki warned that because of all the excess debt hanging over the economy – made possible by the Fed – we are heading into a depression.

In his own investments, Kiyosaki is now shunning conventional financial assets in favor of physical precious metals.

Robert Kiyosaki: Well, my recommendation is, since we came off the gold standard in ’71, put yourself on the gold standard. So, I’m a very simple man. I save gold and silver coins. I have no ETFs. I don’t have savings. I keep my money out of the banking system. So, I’m on the gold standard. I operate outside the banking system. And I’m accountable. I am responsible for my own life. Trump’s my friend. I don’t expect him to take care of me, my God. All these people, Social Security we know is going bust. It’s got no money. I think 78 cents of every dollar collected in taxes now goes to entitlement programs or the debt. We can’t keep functioning like this.

Putting yourself on your own gold and silver standard is the surest way to weather a currency crisis. It may not seem like we’re in one now. But as the debts in the economy and the U.S. Treasury continue to grow unsustainably, the Fed will feel greater and greater pressures to ease – and ultimately to monetize trillions of dollars in government bonds.

Central bankers might be able to rescue Uncle Sam from insolvency. But if they do, they won’t be able to stop the U.S. dollar from suffering a very big fall.

Well now, without further delay, here’s Money Metals’ exclusive interview with a well-known proponent of capitalism and liberty – and a titan of business.