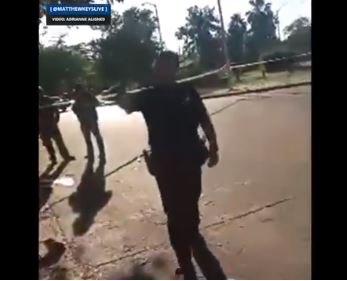 The crowd heckled the officers, threatened to shoot them and called them cowards.

“Get your line! Cowards! The only people we need to be safe from is you!”

All of this was taking place on the street as a young female officer lay bleeding with gunshot wounds.

The 26-year-old officer was later pronounced dead at the hospital. Video posted to social media apparently captures two women taunting and heckling a group of California police officers Wednesday as they responded to a shooting that left one of their colleagues dead.

Posted to Twitter by Comstock Magazine digital editor Matthew Keys, the video reportedly shows Sacramento Police officers handling a domestic dispute which escalated into an armed standoff. In it, an officer is seen shooing two women away from an area and explaining that they need to move for fear of “dirty bullets.”

“Whatever officer [is] gettin’ shot need to be,” another woman is overheard saying before calling an officer a “punk” and “coward.”

The Sacramento Bee reported that officer Tara O’Sullivan, 26, was killed Wednesday afternoon after a rifle-wielding suspect shot her as she helped a woman move her things out of a home. The suspect allegedly then engaged in a standoff with police which concluded with his surrender eight hours later.

Reports indicated that it took 45 minutes to get the injured officer to UC Davis, where she died a short time later.

Throughout the ordeal, law enforcement urged residents to stay away from the intersection of Redwood Avenue and Edgewater Road. While it’s not immediately known where the footage was shot, bystanders can be heard talking about an armed man barricaded in their home before a rapid succession of gunfire emits gasps from the crowd.

“They’re over here scrambling,” a woman said as the video ended.

VIDEO: Sacramento Police (@SacPolice) taunted by gawkers near the scene of a shooting that injured one of their fellow officers on Wednesday pic.twitter.com/Ea4VERvdV6